In case you hadn't guessed, this blog is all about how I've been procrastinating on blogging. And yes, I did make a crossword puzzle, and I did it all without any help from any puzzle builders.

A few things about the crossword puzzle first

Before I jump into the topic, here is the list of words for the puzzle. Each word is separated in the puzzle, even if it is used in a long phrase (for example "cleaned the house" would be three words).

Hopefully I have it set up properly so the photo is easy enough to save. There are two options for how you want to download it: (1) A printable black and white PDF or (2) A Digital fillable PDF that you can do on your phone. I’ve never done anything like this with my crosswords so be sure to give me any feedback on if it does or doesn’t work. Anyway, feel free to download it and solve the puzzle digitally or by print!

Words, tips, and a hint

Since this crossword puzzle doesn’t really give clues or have numbers for the words, I’ll give a few tips on how to solve it. The biggest tip is to go after the larger words first or else the category with the fewest words in it. That way, you eliminate guesswork. From there, it should be pretty easy.

My only hint, which was partially covered in the tips section, is to start with the longest word. You probably already guessed which word that is … procrastination.

The real facts behind the lack of blogging

Blogging regularly takes a lot of work. It takes a lot of preparation time, and it takes me feeling like I accomplished something worthy of sharing. So, when I do a whole lot of randomness, gaming, and all that other stuff listed in the crossword, I tend not to accomplish enough writing to make me feel like I should give an update on it.

So, what exactly have I been up to? A whole lot of the usual. I've been sick, lazed about, working, crafting, wrote a long short story called Noir, and I've been traveling and playing a lot of video games (RecRoom, Valheim, Stray, and Fortnite). Of course, the cats are always distracting, and there's always housecleaning to do. That’s not even covering working from home stuff. 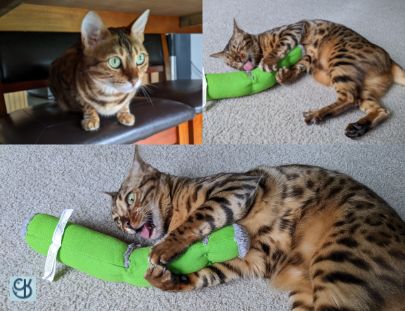 Some of it has been the usual day to day stuff 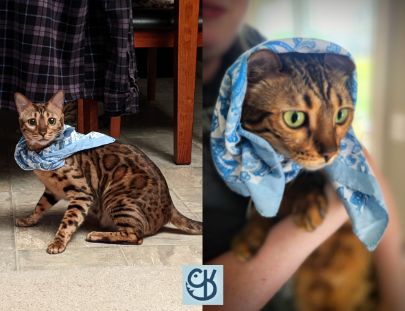 My close friend and co-worker at NJP, Cara Trent, said she'd give me a dollar if I could get a "Babushka" photo of my cat. I thought she was joking. It sounded too cute of a project, so I naturally went searching for something that would work. The first photo was just one of my attempts. It took some help from my husband to get the second, and more properly done version. All in all, it was some fun time with Ella, who was a good sport about it. We never bothered with Eva as she's too jumpy, particularly since she flees at the sight of 'new' things. 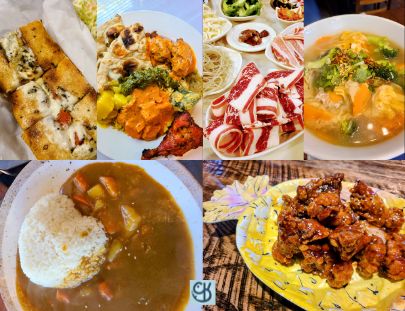 Cara (who is also my book editor), Nick (my husband and owner of NJP), and I all went to Bloomington for a giant, five-day foodie trip. In order from top left to bottom right, we had Turkish pizza from Turkuaz Cafe, an Indian buffet from Taste of India, hot pot at Homey Hot Pot, wonton noodle soup, which was like wonton soup meets ramen, at Blooming Thai, curry at Cafe Bali, and Korean fried chicken (SO AMAZING) at Do Asian Fusion and also at Korea Restaurant (ALSO AWESOME! But no photo, sorry!). We also, naturally, found ourselves ordering bubble tea (I may have an addiction) plus scones and so much more!

My husband has a food blog coming in October with all the things we tried. The area has an insane number of places to try a large variety of food. We enjoyed a few drinks at an international grocery store (4th Street International Market). Later, we went even crazier and stocked up on random fun drinks (I think I had 6 or 7 held in my arms at one point). This was at World Food Market. And yes, we made one worker's day as the three of us wandered around like small children in a candy store. I know I looked ridiculous, and I got more than a few looks, but it was a whole lot of fun!

Some of it has been crafting 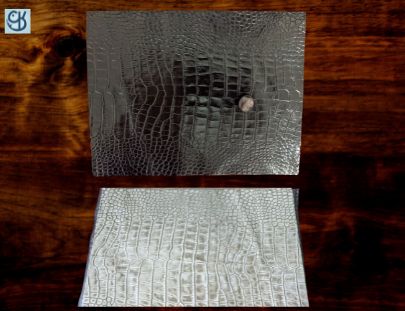 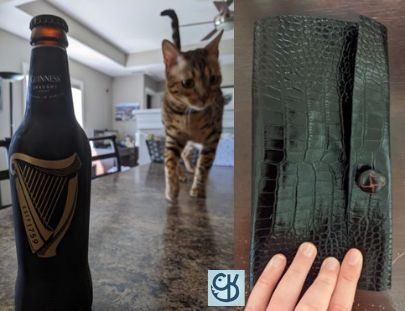 I've been working to shut down my Etsy shop: SKHandcraftedBooks. Unless I pay for ads or start putting up tons more projects or running specials and discounts, Etsy won't let people easily find my shop. That, and there are fees that are piling up, and I hate having to increase my prices just because Etsy is taking a larger cut.

Anyway, when I received a custom order request for a black snakeskin style book for a fellow D&D player, I refused at first. But, then he had to go and use flattery by saying he liked my style and was sad he'd have to settle for something else. Well, that resulted in me trading a beer for a bit of leather dye from a friend and local crafter Jake from Page and Plunder. All that just so I could make the white leather black.

The project is on hold at the moment (I'm waiting for a custom part to come in), but I'm happy with the progress.

A lot of it has been gaming 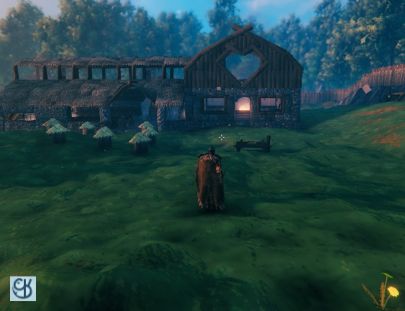 Valheim is a game with viking lore. Its open world allows you to die across multiple ecosystems and it's crafting feature lets you make safe spots where you can do some cool stuff and not worry about murderous trolls, wolves, deathsquitos, and more. I've been waiting for the new Mistlands update for Valheim. As such, I've been making some adjustments around my main base. In particular, I've been tweaking my 'home', which will soon have a 'guest house' added in. 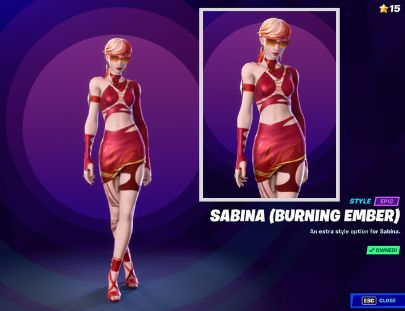 Due to some health issues and our messed up healthcare system, some crap went down and I found myself playing Fortnite. I have been playing entirely too much, but at least now I have a character and outfit I like. It's a shooter game where 100 players are dropped onto an island and only one team can come out victorious. You can play alone or in pairs, trios, or as a squad of four. It’s great for hanging out with friends, but I still prefer games like Valheim (also great for playing with friends - up to 10) or my new favorite, Stray. 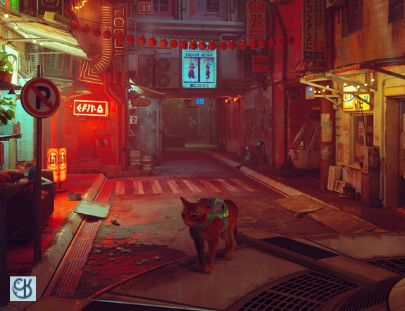 Stray only recently came out, but I already finished the game. It's a story about a cat in a dystopian future where there are robots and no humans. It's super cute! And who can resist playing as an adorable feline? There's very little combat, which I love, and plenty of places to explore. I really hope the creators make a sequel!! Stay took me only six hours to finish, though it has the option to earn a ‘badge’ if you speed run in in two hours. So, yeah. Needless to say, I WANT MORE! 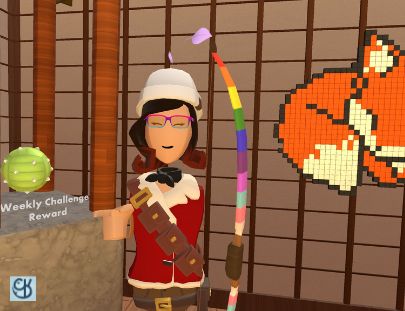 Besides those three games, I have also been doing my best to keep up with RecRoom, my all time favorite VR game. Since there are weekly prizes, it can be motivating to get on and earn a fun new skin, like the rainbow bow or the spiky dodgeball (both shown in image above). The quests are also great for exercising, and can occasionally lead to fun stories if you play with children who shoot and kill you because you took a weapon they wanted or complain when you refuse to revive them (which requires a player to high-five them back into the game, though slapping a hand in any position works) all while they are surrounded by enemies (it's a death sentence, and I'm not getting a game over because you charged in like the unskilled barbarian that you are). I did write a story about crazy players. You can read about it here.

Some of it has been therapy 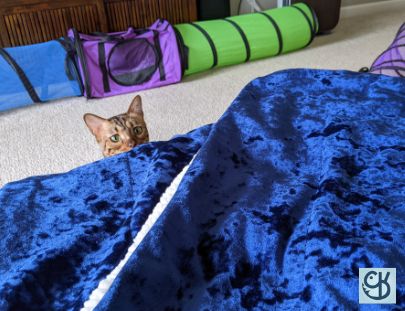 Yes, Mended Light sent me a blanket. How sweet is that? It's like they know I hoard blankets, lol. But anyway, the therapy does take time out of my day, and I do have to prep for it mentally beforehand, and then I have to digest it all afterward. I'd say I'm happy about progress being made, but I'm unhappy about some of the realizations. Mostly in that I've been turning a blind eye to things, and it's only made me hold onto a bunch of baggage I don't need. So, yay, progress and a blanket!

Some of it has been me adjusting to a routine

No, I will not share a photo of groggy Sarah. I have been trying to get up consistently at 6:30am. WHEN I actually wake up has been up for debate. The naps are still happening, but the last time I was on the routine, it took only two weeks to adjust fully to the new sleep and eating schedule. I just have to be consistent, and then my habits will pull me through!

Some of it has been me doing some writing and reading

Sir Ryac and the Dark Mage received some editing, I wrote a ten page short story about a cat saving a woman from a bad situation (Noir), there's been some editing and writing going on for Charm of Night, and here I am, blogging. Heck, I even read a cute book - Highway Cats by David Frankland (picked up while at a bookstore in Bloomington, IN)!

The recap and what’s next

All of this has been going on, and while I could have written a blog, life was more exciting than figuring out what I've been up to lately and then sharing it.

And yes, at some point I will share the solution to the crossword. Maybe in an email blast? Maybe a blog? Who knows.