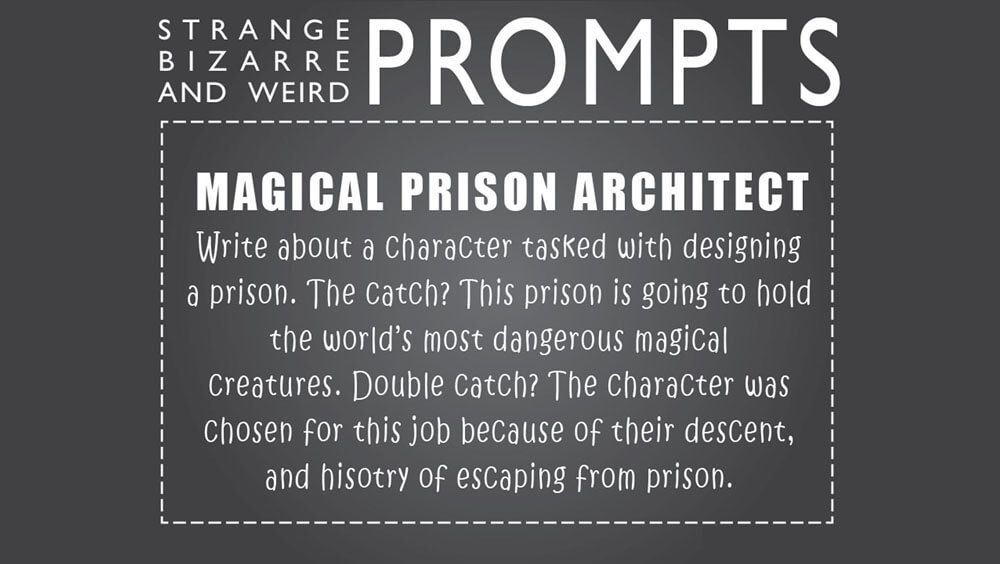 Writing prompts can be a great way to spark your creativity. This is the prompt I used to write this story; I hope you enjoy it!

“What is going on here?!” A surly looking dwarf demanded.

The question happened to be quite justified. All around magical beings ran to and fro in utter chaos. There were fire imps flying haphazardly through the air, orcs sprinting about trying to replace fallen bricks from toppled structures, a magician staring at a burning brick wall, a harpy chasing after fleeing orcs (who were actually construction workers), and in the middle of it all stood a lone orc oblivious to the chaos around him. All around him walls lay in crumbled heaps, some of which were still crumbling. The scene looked like a city that had suddenly suffered a massive earthquake throwing its poor citizens into a massive panic. Only, the destruction had not been accidental and the ‘poor citizens’ were actually inmates from the recently destroyed prison.

“You! Orc! What is the meaning of this?” The angry dwarf from before demanded of the one orc who was not busy carrying bricks around.

“Yes! I can see quite clearly what has happened. The question is, why isn’t anyone taking charge? Speaking of which, where is the person in charge here?!”

“Oh, that would be him,” the orc said with a downward thrust of his thumb. Sitting innocently at his feet sat an infant covered from head to toe in soot.

“What.” It was incredible how one word could hold such power with the right inflection and a great deal of anger behind it.

“No, he is not. That is an infant.” It was taking a great deal of self-control for the dwarf to even speak to the dull witted orc in front of him. “Where is the person that I left in charge?” the dwarf enunciated every word carefully so there could be no confusion.

“Oh, the wizardy guy? He got too close to a banshee and she uh…killed him.”

“D’von is dead?” The news rocked the dwarf back on his feet, but he soon recovered. “Then who put this infant in charge?”

“Oh, I did, sir! Yep, that was my idea.” The orc stood straighter, his chest puffed up, his chin lifted, and he grinned from tusk to ugly tusk.

“That’s nothing to be proud of!”

“Oh, sorry, sir. It just…”
“Get a hold of yourself you blasted orc! We need someone with backbone, with grit! This is a prison we’re running here and so far the only thing running is all the damn prisoners!!”

The furious dwarf took a deep steadying breath. As an added precaution, he took a few steps back for fear he would clobber the orc. True, dwarves and orcs rarely if ever got along, but this one truly behaved in a way that only a good clobbering could fix…permanently. At least the other orcs were busy trying to rebuild the shattered prison walls. He dared not look too closely for fear he would discover what they were actually doing.

“Well, sir. I did pick a rather good substitute for ol’ D’von. Ya see-“

“Do explain how a babe can be a replacement for D’von,” the dwarf’s voice dripped with acidity.

“Ya see, sir. He’s a demigod. And not just any demigod either! He’s a son of Zeus!” The orc grinned his big stupid grin.

“Demigods are great!” There was such exuberance in the dwarf’s voice that the orc’s grin actually widened. “Especially when they’re full grown ones.” Those last words ripped the stupid grin off the stupid orc’s face.

“But, sir! This is a son of Zeus!” He pointed again at the child at his feet. The son of Zeus giggled as he blew sooty bubbles from his nose.

“Just ‘cause he’s a son of Zeus, that don’t make him all powerful! Do you know how many women Zeus has lain with? How many children he has? Did you know some of ‘em ain’t even his own species? And what good is some untested BABE going to do when it comes to running a prison? Oh, he may a demigod by birth, which wasn’t all that long ago…” the dwarf coughed the last under his breath before continuing, “but that don’t make him qualified! We need more than just power! We need someone experienced in breaking out of prisons to make this the best damn prison around!”

“But, sir!” the orc interjected.

“What is it?!” The rant should have been enough to knock some figurative sense into the orc. But judging by the way the orc shook with excitement, or something else, it was clear he felt justified in his choice yet again.

“What?” The dwarf wondered how an orc had ever been put in charge, even as second in command. D’von sure knew how to pick ‘em!

“The demigod is an escapee.”

“What?” He asked with the same flat tone as before. Nothing made sense to him anymore! Orcs in charge of prisons and prisons run by infants. What was the world coming to?

“But they are! At least to babies they are.” The orc looked pensive for a moment as though trying to picture what a crib looked like from an infant’s perspective.

“Elsewhere? But we have everything under control.”

“Under control?” The commissioner pivoted on his heels and turned back to face the orc. “You call this under control?! This isn’t under control!! Look around you! The walls are all toppled over. The inmates are all free. Some of them are eating each other! There’s a pyromaniac burning your brick walls and just standing there watching them burn. He’s completely oblivious to everything! Just look at him!”

They looked and sure enough there was an escapee standing by a brick wall watching it burn. He was naked too, aside from his flopped over wizard’s hat.

“Instead of focusing on rounding up prisoners, or at least taking that blasted hat from that maniac to stop him from being able to gather magic, your men run around gathering fallen bricks! Bricks! Like that’s going to fix things!”

“My men are doing what the demigod told them to do.”

“What?” He really needed to stop saying that, he admonished himself. “The baby spoke to them?”

The commissioner rocked back on his heels. Of course that had not been the truth! Besides, since when did orcs ever tell you the truth, the first time around?

When the dwarf made no move to either leave or to respond, the orc continued. “You see, I was the one who actually gave the order to the troops. He-”

“And the prisoners?” The Commissioner said, cutting the orc off. He had no desire to hear what lamebrain idea or concoction the orc had made to somehow hear the baby’s thoughts. In fact, he really had no idea why he even bothered to ask the follow up question. The situation demanded serious action, and he was wasting precious time. He needed to get someone else in charge and get things cleaned up and real construction underway. The only thing keeping him from panicking lay in the fact that this particular prison had been a test. So, luckily most of the inmates were relatively minor aggravations to society.

“Oh, we hired medusa to collect them all.”

“Medusa, huh. And how exactly did you convince that snake head to help you?”

“Oh, not exactly.” That seemed to be his favorite phrase.

“Not exactly. Well, I’m done here. I’m going to go get the board together and we’re going to get a real prison put together. While I’m gone, I expect this mess to be cleaned up!” In an angry huff the dwarf turned and started on his way. As he passed the wizard staring at the burning wall, the dwarf clamored up a few fallen bricks, snatched the hat, and jumped back down to the ground. The now completely naked wizard never even noticed.

“What a jerk,” the demigod said in his tiny baby voice once the Commissioner had left.

“Would you like me to take care of him?” a beautiful woman asked as she stepped out from behind a pile of bricks. The orc coughed as he forgot to breathe, the woman was so beautiful. A thin protective veil covered her face and dangerous eyes. As the orc coughed, the woman smiled.

“No, leave him be for now,” the child of Zeus said with a wave of his tiny hand. “I’m more worried about the board…Are you done turning the escapees to stone?”

“Of course. On both accounts. If the board worries you so much, I could easily take care of them. As for the escapees…All except that insane wizard have been accounted for. And he seems content right where he is.”

“Yes, master!” Orc dutifully turned his gaze to the child of Zeus.

“How much longer is it going to take your men to finish moving all of those bodies?” the demigod demanded.

“Not much longer, sir! They were nearly done when the Commissioner arrived, sir!”

“Good, I don’t want him coming back and realizing all those bricks he saw being moved were actually petrified inmates. When they’re done with that, order them to start reconstruction. This time I want those walls enhanced with magic after they’ve been built. It does no good bolstering their strength as individual bricks. The stronger creatures just push them out. Is that understood?”

“Yes, sir! I’ll get my men on it right away, sir!” With that, Orc ran off to the nearest band of orcs.

“You’re so cruel calling him that.”

“Ha! You should have seen how long it took me to even get that name out of him,” the infant grumbled. “The dwarf was right about one thing. That orc is an idiot.”