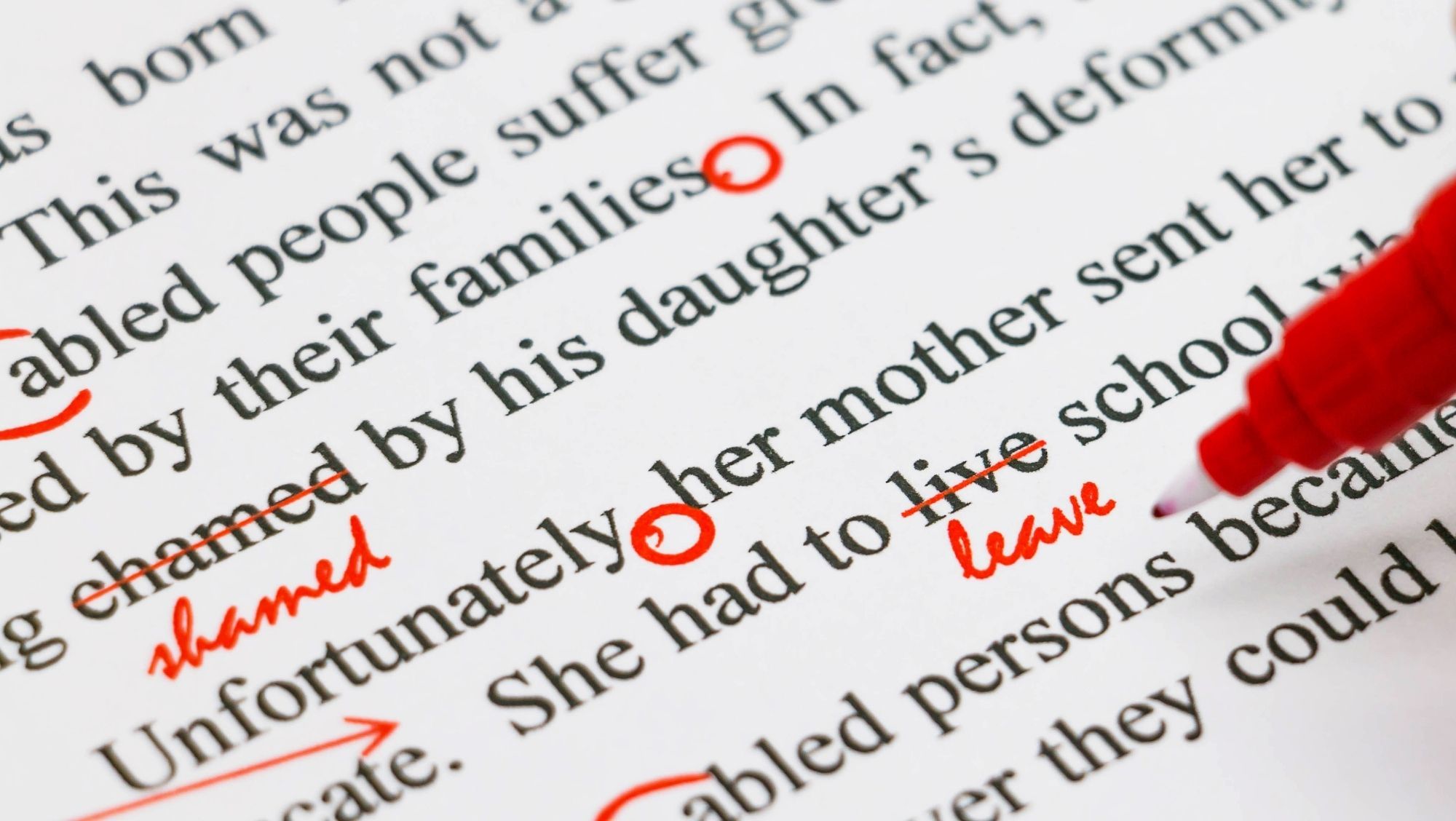 Sometimes even the best advice can backfire. In my case, I hired a developmental editor after a recommendation from a local author. One of the most amazing things about the writing community is how incredibly supportive we can be to one another. I know some of it is influenced by marketing themselves or their books but thinking like that takes all the joy out of it. Why can’t people just be nice because they’re nice? No strings attached?

Well, anyway, here begins my tale of woe. I had just finished my first novel and I needed a professional to look it over and give me feedback. Specifically, I wanted a Developmental Edit and a Line Edit. The first one is to make sure characters, settings, and plots are consistent and there aren’t any major problems. Basically, this was, from the start, built to be a two-part project.

I reached out to Jennifer Wells, a successful sci-fi author. We had very briefly met, if you can call it that, at my local library. She had been a presenter there and shared her writing and publishing journey. Anyway, her usual editor was out on paternity leave, but she recommended her back-up editor Bryon Quertermous.

I would like to be clear, Jennifer has been nothing but helpful and equally pissed about what happened between myself and Bryon. Bryon has, after hearing from me and an author friend of hers, been removed from her website. Sadly, I wasn’t the only one to be burned by his bad behavior. Jennifer had used Bryon before and had been pleased with the quality of the work, hence why he was on her website. He had been referred to her by another author. After Jennifer heard from me about my issues, she reached out and discovered this other author suddenly started having problems with him as well, and it sounds like it was around the same time as me. So, basically, the guy used to do good work, and then he suddenly stopped. I really feel for that other author. I can’t imagine what he or she must have gone through emotionally. After all, they’d worked with him before, so they probably passed it off as odd behavior and let it go for too long.

Anyway, now on to my bad experience and a few things to note there. The chart below is just a visual to help show the breakdown of communication along with the obscene level of delays. I want to be clear that Bryon set the deadlines for his work. He was paid upfront for the developmental side of the work and was paid at the end for ‘finishing’ the line edits. I did not impose these deadlines on him. I did my best to enforce them without being a naggy client. I should have gone legal on him from the start, but that’s a hindsight issue. Anyway, here’s my horror story broken down by month, year, and brief description of the message content. 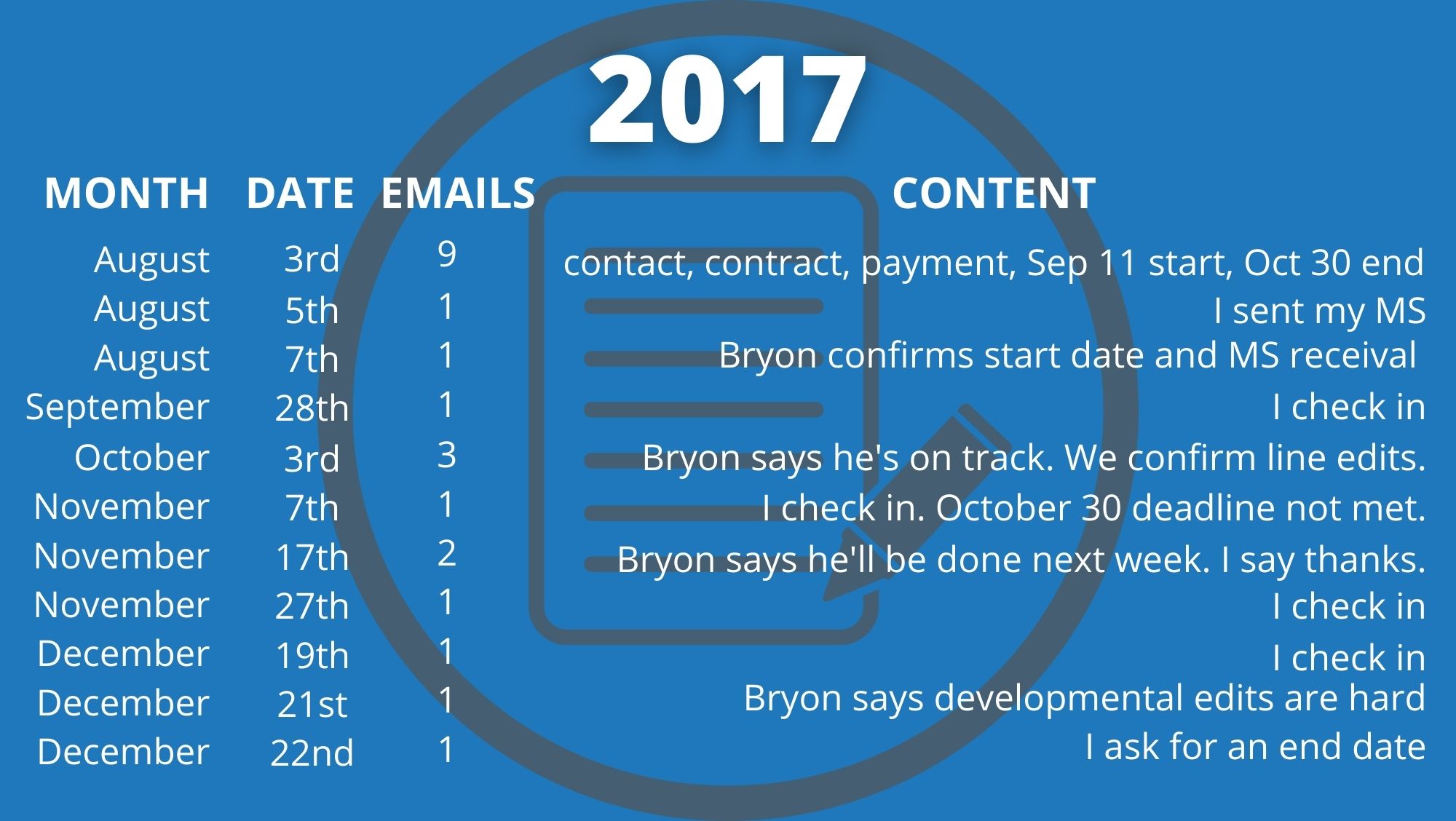 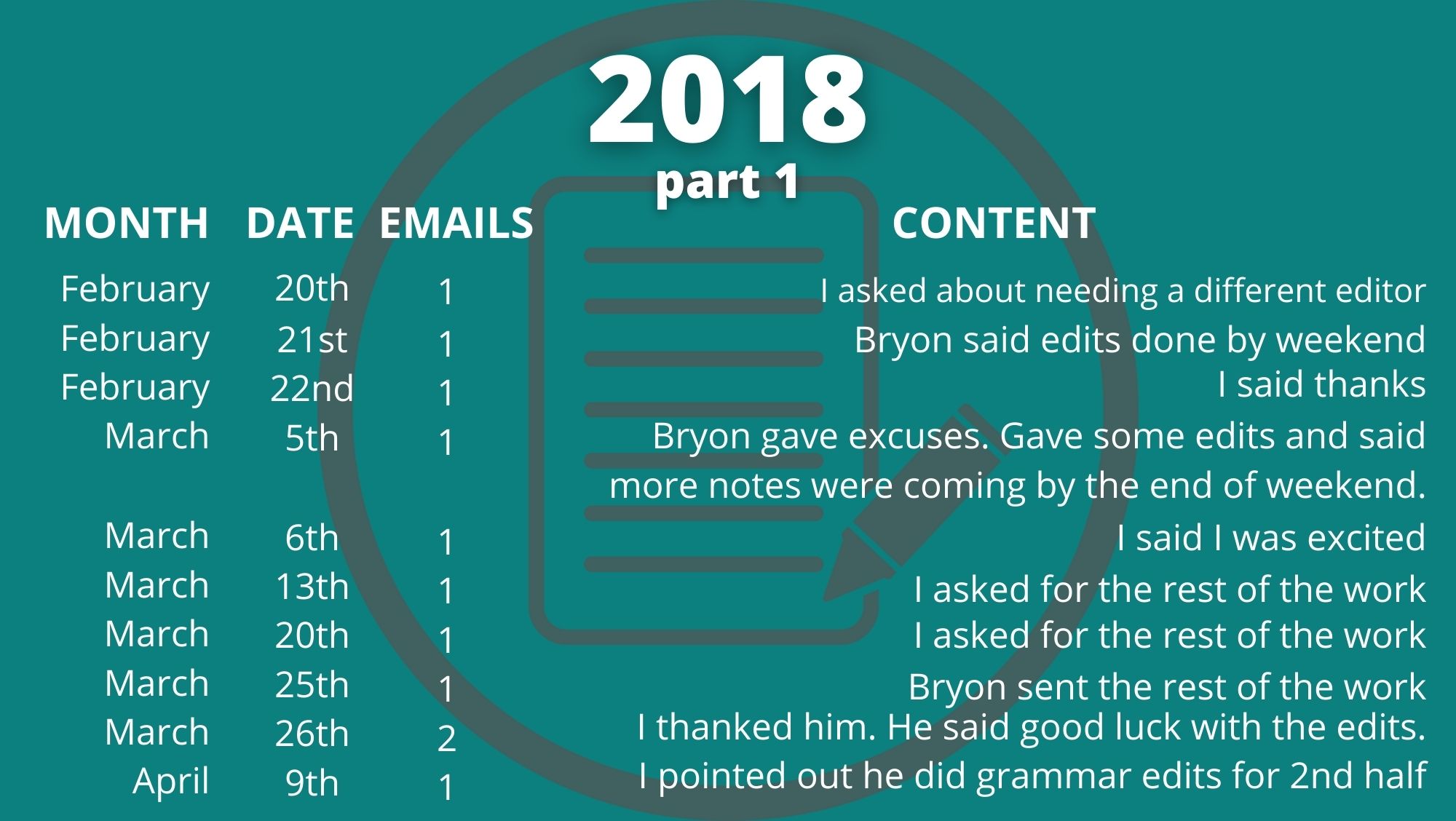 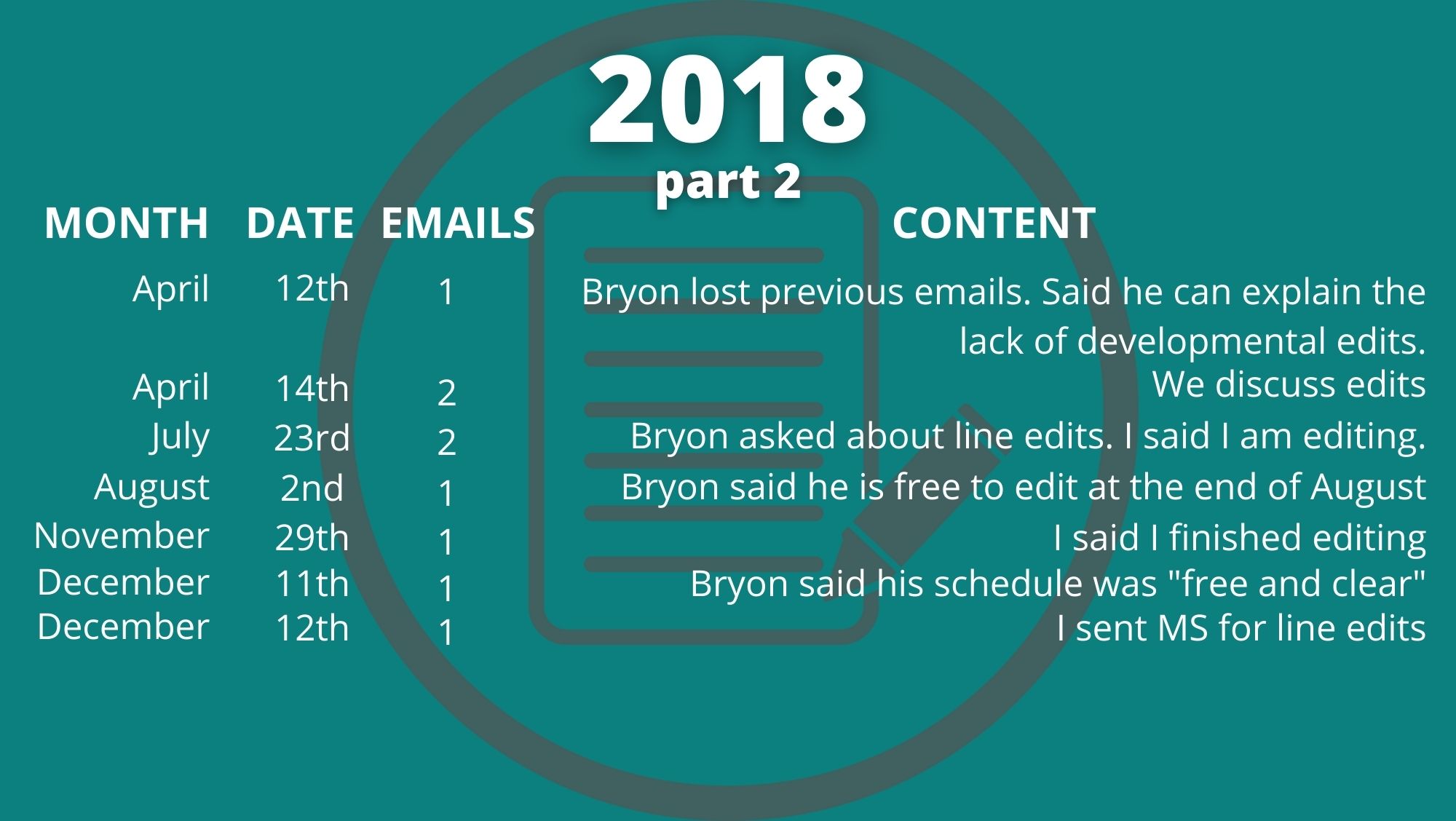 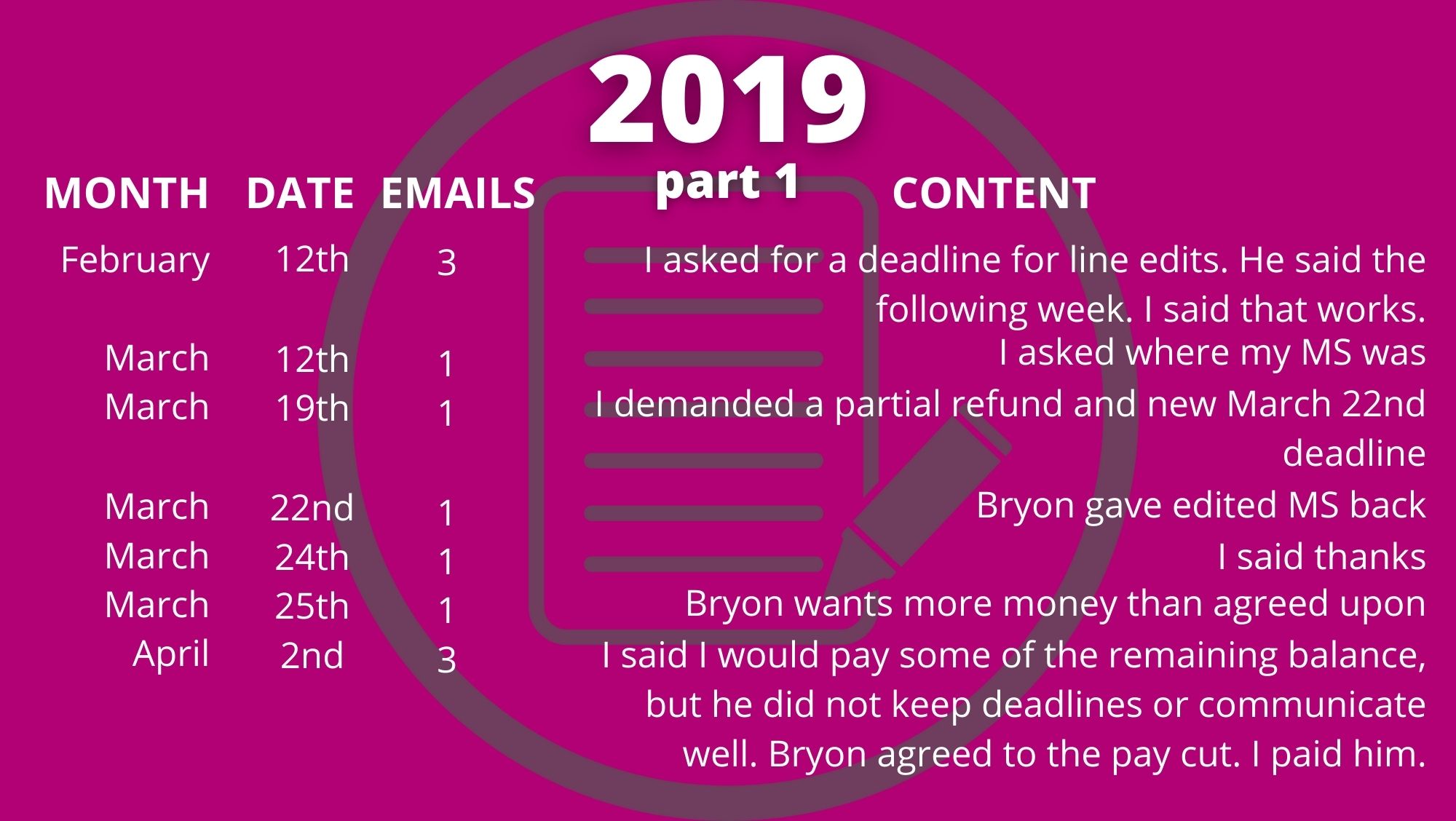 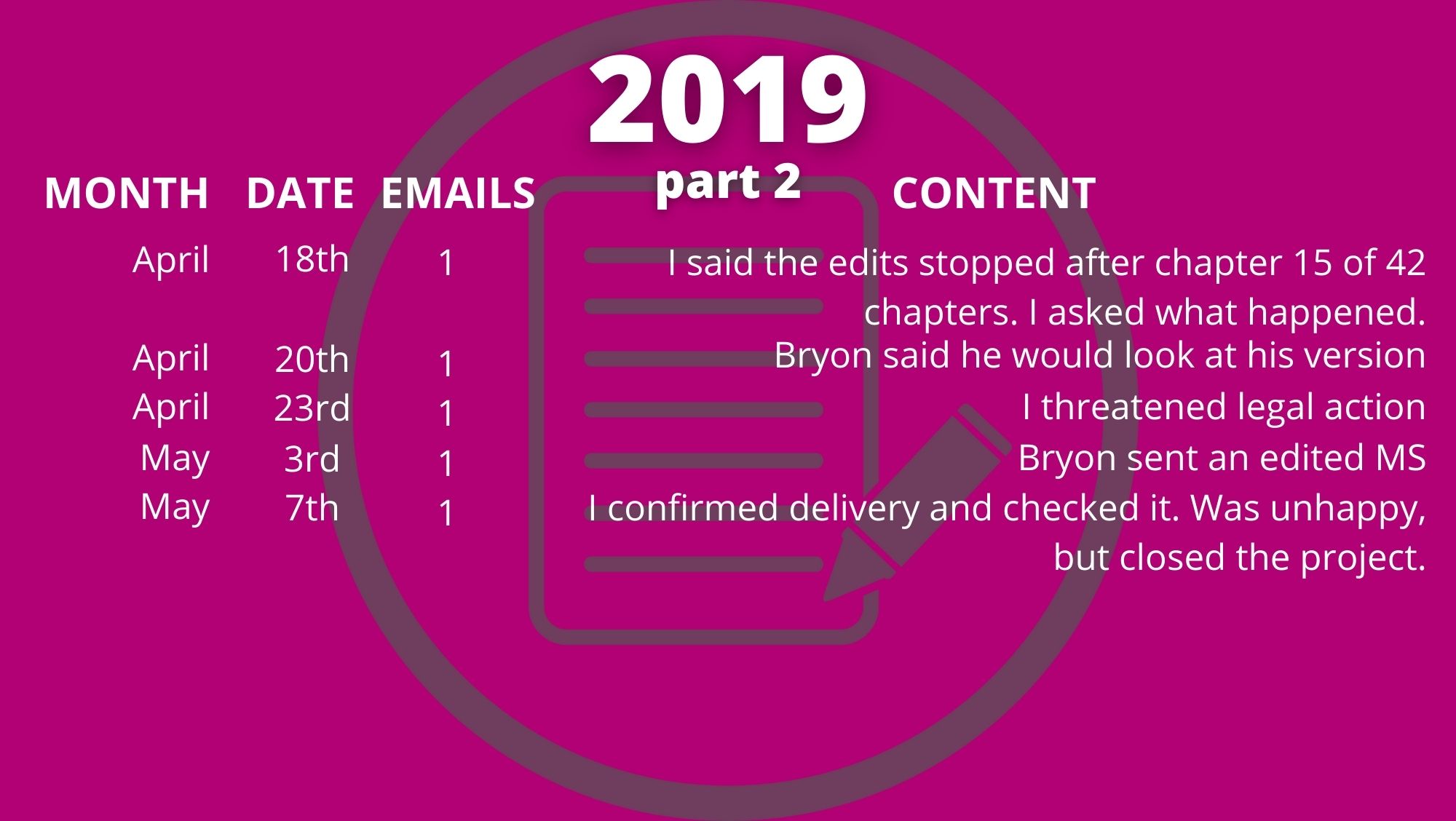 Deadlines were not met

As you can see, it was a shit show. He said he could have the MS (manuscript) edited by October 30th, 2017. March 25th, 2018 was when he finally completed that project fully.

I made the mistake of not asking for a deadline up front with the line edits. I sent him line edits on December 12th, 2018 after he said he had a free schedule. February 12th, 2019 I asked for a deadline, he said the following week (equating to Monday February 18th through Sunday the 24th. Bullshit ensued. He gave the final edit on May 3rd, 2019.

I want to be clear that Bryon was rather pleasant to work with. He was lighthearted and apologized. Those were the only redeeming qualities. He made shitty excuses about losing notes and emails (sometimes after months of delays), and that irked me. On top of that, the actual editing was also terrible. He called my main character stupid or dumb at one point, which is highly unprofessional. There’s a difference between: “This seems inconsistent with how your character would normally act. She’s been clever up to this point, so this behavior is unexpected.” And what I got which was something along the lines of: “She’s being dumb.”

Get ready for another example of why we didn’t ‘click’ despite my loving his bio and services on his website, which I did, by the way. (Quick blurb here: he has since taken down his services and now only promotes his own books. Yes, I do believe he focused on publishing his work over doing the work I and others were paying him to do.) Ok, back to the example.

His response: “She knows these people are popular but doesn’t seem to know any of their names. That seems weird to me.”

This was based on my own personal experiences. I barely knew anyone’s names in high school. I could still tell who the popular ones were based on other kids’ reactions or the gossip or the clothes and hair styles. Even if it wasn’t from personal experience, saying a character is weird should have been a red flag. He’s basically saying she is unrelatable to him as a reader. But he didn’t just come out and say that. He had a great way of being insulting without saying much that was useful, not unless I did the hard work of breaking it down to try and figure out what bothered him about a scene.

As writers, we pay editors to find issues for us. We pay them to articulate those issues. Bryon pointed things out, but he often did so in a highly abrasive way. That is not how you communicate with someone you want to help. We all get defensive, particularly about the things we love. Besides, the things he did and said were unprofessional and had the opposite effect of helping.

What advice do you have for someone looking for an editor?

If someone tells you that you’ve hired a scammer, listen. (I had someone comment on my blog that Bryon was not to be trusted. I FELT like it was too late at that point as I had already paid him and sent off the MS. I should have called it quits as soon as he failed that first deadline, but I was a pushover.)

Don’t be a pushover.

Make sure they set deadlines and keep them. (Most editors really only need one month for the actual editing. 3 years is beyond ridiculous.)

Make sure they communicate well.

Make sure they know to check in with you (Bryon should have told ME when he started working. I shouldn’t have been the one to keep initiating those emails).

Make sure you don’t pay the full price up front unless YOU are comfortable with that. It’s totally acceptable to pay half (or more than half) up front and the rest later.

Make sure it they are a good fit for you.

Make sure they have good credentials.

Don’t be afraid to ask for refunds.

Don’t be afraid to cancel services.

Ask to have them edit the first three chapters. Note their timeline. Pay them. See how that goes and feels. Read the comments and feedback. Did you feel it was good, even after a few days of sleeping on it? If yes, take the next step. If no, get out of there, but be courteous and thank them for their time.

Be aware that some people mesh and some don’t. If you don’t mesh, then find someone who does.

Make sure they enjoy the story. Bryon clearly had issues with a lot of core concepts (character wise). I was too in love with the story to care about his constant stream of disapproval or confusion as to how someone could be so clueless about gaming online (he never played an MMORPG, and he gave feedback that showed his ignorance.) Clearly, he was not the target audience, even though he gave every indication he was. – which brings me to…

If you thought the editor was your target audience based on what they say they edit (they have genres they love, too!), but it turns out they are not, then get out of there and reevaluate. Either that is a sign your story needs some work, or it’s a sign of not meshing. People who get paid don’t always chose honesty when it means they’ll lose the business.

I think that’s about it. I mean, it helps to know the editor before they work on your MS, but that isn’t always possible. Having an agent can help, but sometimes agents are scammers to. I know. It sucks. I did a lot of things right, at least in the beginning. I used a well-known author’s reference. I confirmed the meshing well. Then things fell apart. I didn’t have him read or edit the first three chapters. Sure, we had meshed well outside of the actual project, but I never tested how we would do with the important part.

We’ve seen what a bad editor can look like, what about a good editor?

On the plus side, I have found a new editor I love. She’s Cara Trent over at Midnight Quill. Just as soon as I finish editing Ryac, I’ll be sending it over to her for a manuscript edit. I’ll try writing a blog soon about what it’s like working with a great editor so you can have a dose of both the good and bad.

Have any questions or concerns of your own? Hit me up in the comments below! I’m happy to share what I know or don’t know. Until next time…