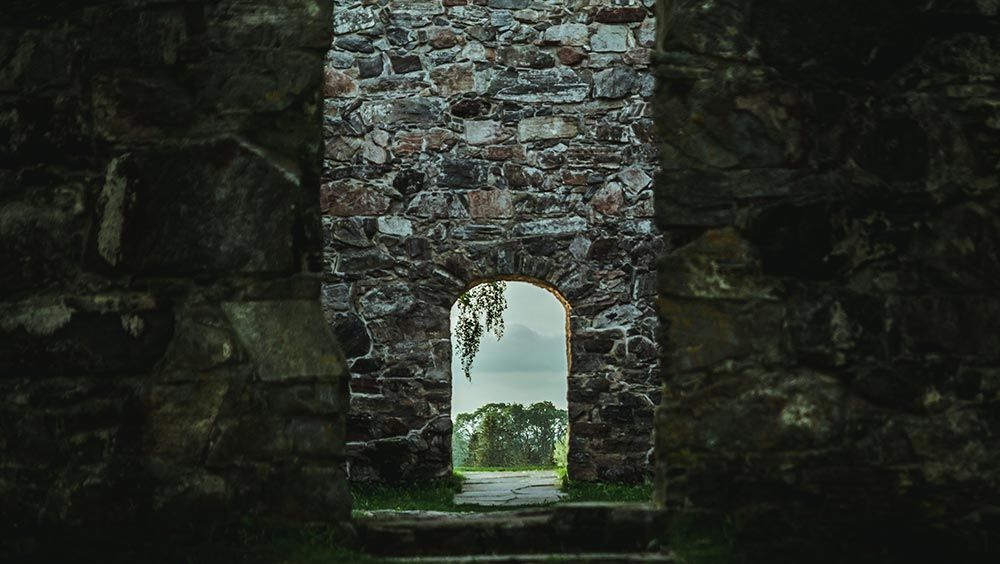 It seems my mind never does what I want it to do! That’s good news for Ryac fans, because the story within the journal is back! Hopefully it was worth the extra long wait!

"You know not what you ask of me. Your handmaiden-”

“Is dead!” DeNadie looked away, ashamed of her outburst. “She’s dead, Ryac,” she said more somberly. “The ring is not safe with me.” She took his hand and folded his fingers back over the ring. “Until the wrongs have been righted, keep it. May the spells upon it keep you safe.”

With a pained expression, DeNadie nodded her assent. “I must hastento the castle before I am missed.”

“I shall escort you.” Ryac removed the beam from across the barndoor before DeNadie could protest.

“It is a dark night. I’ll not be detected. My cloak will conceal me.”

“Are not the Warlock’s powers increased on moonless nights such as this?” Ryac asked innocuously. “And you without your ring of protection,” he added as DeNadie began to protest.

“Very well,” she said, feigning anger. She flipped her hood up dismissively. Despite being dark skinned, she made sure her gloves and cloak were snug about her. When she was convinced the dark clothing shielded her from sight, she turned to inspect Ryac.

Without a word, Ryac began his own preparations. As he did so, DeNadie cringed. Each movement he made was accompanied by the creaking, clinking, and rustling of his armor.

Ryac dismissed her concern. “Fear not, m'lady. I can move silently when necessary.”

“Sir Ryac, do you truly wish to avenge me?” the princess asked, her eyes intent upon his.

Rather than allaying any of her concerns, the response made DeNadie suddenly uncertain.

“Pray tell, is something the matter?” Ryac asked, concerned that he had somehow misspoken.

“No, no. Nothing like that,” she answered elusively. “We should go.”

The knight had been about to press for an answer, but he nodded instead and snuffed out the candlelight. There was little to be gained from arguing, and much to lose. The longer they delayed, the greater their chances were of encountering the Warlock, or so Ryac believed.

They were silent as they made their way from shadowy corridor to shadowy corridor. Only the wind could be heard as it ruffled tarps over street carts or creaked against old wooden beams. There were few insects around this time of year, and fewer animals that dared to walk the Warlock’s streets at night.

Despite Ryac’s concerns, they made it unhindered to the palace gardens. Still, he felt ill at ease and his eyes darted about as he searched every shadow. His hand never left the hilt of his blade. Together they stopped under the stone lion archway that led into the palace gardens. Even when the princess dismissed him with a curt nod of her head, he remained alert and vigilant. He had never heard of anyone being attacked on the castle grounds, but then, he had never heard of anyone staying out at night, not since the first attacks.

Ryac did his best to watch over the princess as she worked her way under stone archways, around elaborate fountains, and between intricate networks of flowerbeds. More than once he lost sight of her as tree or stone blocked his view. Each second wore on his nerves and every rustling leaf had him fighting to hold his position.

He dared not cross under the South Wing’s stone lion archway lest he trigger some protective spell and alert the palace guard to the presence of an intruder. He doubted they would take kindly to either him or the princess being out at night, if they even bothered to leave the safety of the walls at all, anyway. Regardless, they could make it difficult if not impossible for the princess to sneak back to her quarters undetected.

Lost in his thoughts, Ryac nearly missed noticing the darkening of the world around him. While it was dark enough without a moon, the stars had provided more than enough, if not too much light to see by. Now, however, the stars lacked their former luster. His eyes flickered toward the heavens as he sought a natural explanation, yet no clouds marred the starry skies.

When Ryac’s eyes flickered back to the place where Princess DeNadie had been, she was gone. He shifted his weight as he prepared to charge into the gardens in search of her. He caught sight of her running form as she darted to the garden’s West Wing entrance. Something dark followed close behind.

Ryac wasted no time! He turned and ran back the way he had came. As he passed under a stone archway, he turned sharply to his right. If he ran fast enough, he would reach the same exit the princess sought to flee from just as she reached it. He ran, his heart racing, his blood pumping, and his mind ready for combat.

He reached the archway and charged through, but there was no sign of the princess or her pursuer. Still he ran, fully prepared to charge under the West Wing’s protective lion archway.

A terror-filled scream split the air, followed by the sound of a beast’s blood-chilling roar. They both cut off suddenly and unexpectedly. The chilling silence stopped Ryac’s blind charge. He instead moved swiftly and silently under the shadow of a tall bush.

Moving carefully so as to avoid detection, Ryac parted a few leaves and peered into the garden. The Warlock, for it could be no one else, strode casually toward Ryac’s position. Not even daring to breathe, Ryac stood unmoving. Only when the Warlock stopped and stooped down did he begin to breathe again.

From what Ryac could see, the Warlock picked two small items up off the ground. He knew one of them to be his princess, and quickly surmised the other to be a pet of the Warlock. It took a great deal of restraint to keep from charging the seemingly prone man. The knight knew better than to attempt such a foolhardy thing. Everyone knew, even reckless knights, that Warlocks could only be slain during the day. Their powers were simply too great at night, and this was no ordinary night.

Helplessly, Ryac watched as the Warlock placed the two items into a pouch at his waist. Then he raised his hands to the heavens. Ryac’s eyes flickered to the sky as the stars burned bright once more. When his eyes looked back, the Warlock was gone.

Despite the anger he felt, Ryac began planning his next move. He had heard rumors of where the Warlock went during the day. If he moved swiftly, he might reach it before dawn. Luckily, or perhaps unluckily, he could move freely now that the Warlock had a captive to keep him busy.

Ryac dared not think of the princess’ fate. He was about to turn to leave when movement within the garden caught his eye. A dark form had stepped out from behind a dark pillar, no doubt also feeling confident that the danger had passed.

Rage filled the knight as he saw who it was that had so boldly stepped into the light: The Dark Mage.

“Heh, better her than me,” the Dark Mage cackled.

Enraged at the sudden sinking suspicion that the Dark Mage had been the real target of the Warlock’s pet, Ryac drew his sword. He hacked a branch out of his way and charged under the West Wing arch. As he made his move, so too did Dark Mage.

With a flick of his wrist, the Dark Mage tossed a small object against the cobblestones at his feet. A thick mist began to form where the object struck the ground. Before it could conceal the Dark Mage and carry him off, his eyes met Ryac’s. There was a flicker of recognition as the Dark Mage watched the knight’s enraged charge. He laughed as the mist rose around him. Then he too was gone.

“Curse you,” Ryac spat at the empty ground where the Dark Mage had stood only seconds before. His sword hissed angrily as he sheathed it. From behind him suddenly came the sound of rock crumbling and shifting. It soon turned to an animalistic roaring as the rock lions tore themselves free of the stone archway.