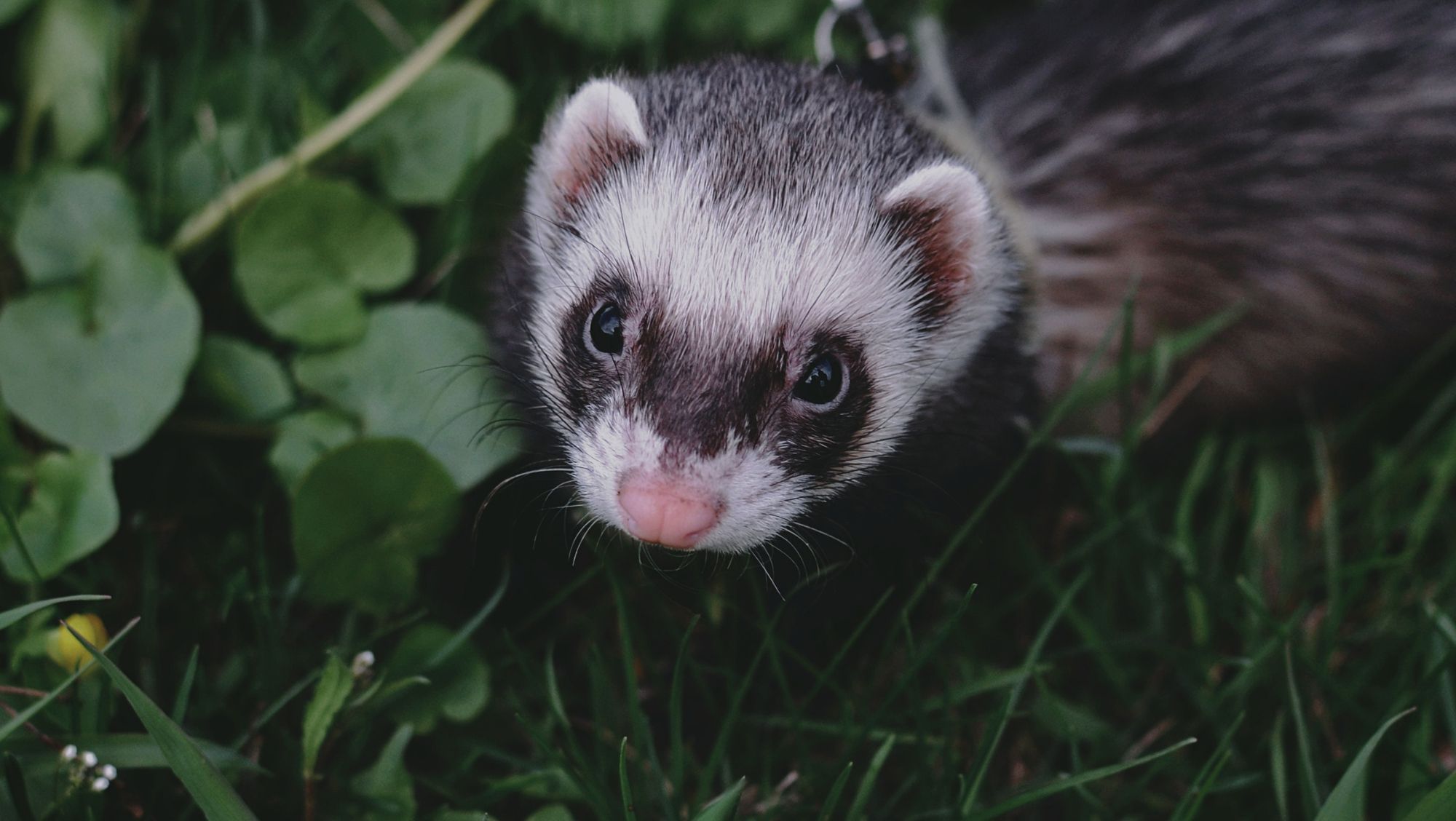 Remember how I said I wanted to do more short stories a few weeks ago? Well, I have succeeded in once again accomplishing just that! This time around, it’s a prequel to my halloween ferret post coming up. May your adventures be many and your inspiration be endless!

Before I get to my Halloween special, I wanted to give a bit of a backstory on something I once tried teaching to Erin, which I like to call: ferret shoulder training.

I really only committed to this training once. Although, there were plenty of times I made an attempt and simply gave up after a few seconds, or unsuccessful attempts, later. Anyway, I tried teaching Erin to stay on my shoulder once while standing on my bed. You may or may not know this, but ferrets are trained to not jump off a shoulder because the landing hurts. Well, I had hoped the bed would be annoying enough that Erin would learn while also doing the least amount of damage, if ferrets can even take damage (I’m joking here! Of course they can take damage and feel pain. They just are so dumb about the things they do that they seem impervious to danger or pain, that’s all I’m really getting at.).

The first attempt at training didn't go well. You'd think a bed would be a soft spot to land. Well, it is. The only thing is, ferrets are kinda slinky-like. They ... uh ... don't exactly stick the landing. Let me try to paint this picture for you.

Me, standing on my bed, trying to find my own balance as my feet bounce a bit. Erin is on my shoulder, but she wants something else (the blankets she sees, the top of a shelf, Teeka...). She immediately decides to make a jump for it, it being any number of things that may have captured her attention.

I fumble and try to catch her, as I still wasn't fully prepared to just let her fall. Well, I didn't catch her exactly. I more of fumbled her as she slipped between my fingers. At this point, she started spinning mid-air, either because  I caused her to start spinning or she decided to start doing a death roll as she was free falling. Either way, Erin was falling and thrashing about.

When she finally landed on the bed, she bounced. And then she bounced again. I tried to catch her, but she just kept going. That was it. She was just bouncing and floundering, a war dance of pure chaotic rage that only a ferret can produce. Pretty sure she was chittering at me as she glared up at me. Then, her butt went over the edge of the bed, and it took the rest of her bulky form with it.

I was shocked and dismayed. Not only had I failed to teach Erin to stay on my shoulder, but by interfering, I had set her on a path of bouncing mayhem and then she went right over the edge. It was like watching an animal caught in a current that's headed straight for a waterfall.

At that point, I was mortified.

Then, like half a second later, she is on the carpet running out of the room. Teeka wasn't in sight, but everyone could hear Teeka whenever she had an itch. Just as Erin hovered in the doorway, Teeka slammed into a wall or something and then she thrashed around as she gnawed the irritated skin and then kicked off the wall to be on her way again. Her path took her directly in front of Erin, but she never slowed as she raced for a nap spot under the couch. Erin, as usual, went running after her.

So, yeah. I eventually caught Erin and we went back to the bed for a second attempt. Sadly, that went about the same as the first time around - Erin fell, she twisted around mid-air, she chittered as she bounced, and then over the edge she went. Turns out, Erin just liked to perform war dances mid-air, resulting in her twisting and turning and flopping her way over the edge of the bed. Oh, and she always had that look of surprise whenever she went over, like she has no clue she's reached the end of the sea of blankets. That alone was enough to tell me Erin wasn't exactly smart or teachable at this stage in her life. She was close to seven at this point, which is the average age most ferrets live to.

Erin was the only ferret I ever tried teaching to stay on my shoulder. Teeka would've been gone before I could even place her (she only stayed still if she was asleep, otherwise, it was constant motion with her). Basically, I knew that if I attempted it with Teeka, she'd be off the shoulder in a half second, then over the bed and out the door a half second after that.

Tango would have been a good candidate, now that I think about it, but he was just such a gentle boy. I couldn't do it. Erin and I had a special bond. We took naps together, and she enjoyed biting me during said naps so she could have more room. So cute! So violent! Tango just did his own thing, and I let him do it. Oh, as a bonus fact, Erin had been partially trained, when she'd been a young ferret, to stay on a shoulder. So, of the three of them, I also thought she'd have the best chances of figuring it out and with the least amount of falling.

I’ll never know if I was wrong about that or not, but it’s certainly a fond memory of Erin and I having fun.

And, to be perfectly clear, Erin was never hurt during the attempted training, which again, lasted all of two attempts. She injured herself jumping off the back of the couch for no good reason or by falling out of her hammock bed and literally flopping from one shelf of the cage to the next to the next to the next and then finally hitting the bottom of the cage. Sure, the shelves were staggered, but it took considerable skill to roll one way, then the other, then back the other way. Teeka did it the most as an itch usually had her rolling in all directions, so it made sense for her to fall all the way down. Tango never had that issue. He knew how to gently lower himself onto the next level or how to use the slide. And I only caught Erin doing it once. Maybe she just wanted to see why Teeka did it so much and then decided it wasn't for her.

But those darn couch leaps of faith! Oh, that reminds me of that one party I hosted where everyone was sitting on the couch (one that is safe for guests to use even if a ferret is snoozing under it, yes ferrets are often crushed as they nap under couches). That darn party is where I discovered Erin’s Mountain Dew addiction! Yes, she knew what it was. And yes, she did stick her head into a guest's glass and took a few sips before anyone could stop her, let alone knew what was going on. I was mortified at the time, until I learned a previous owner had let her try it, so she had known exactly what she’d smelled and had gone after it as any tenacious, one-track-minded ferret would. Also, she seemed to suffer no ill side effects. She was a grumpy butt the rest of the night, however, as no one would let her near the drinks again. Pretty sure she climbed up pant legs and jackets just to try reaching the arm that held the glass.

She knew it was there. She knew. You know, I bet I could have trained her with Mountain Dew as an incentive. I bet she would’ve climbed up my leg and happily sat on my shoulder just for a sip.

Please don’t give animals soda. It was funny in the moment as well as a complete accident. If you want to train a ferret, see what non-toxic things they like instead.

Anyway, that’s the end of this side tangent. Next week has a Halloween themed tale!