Tales of a Ferret Owner: Tango and Erin's Solo Adventures 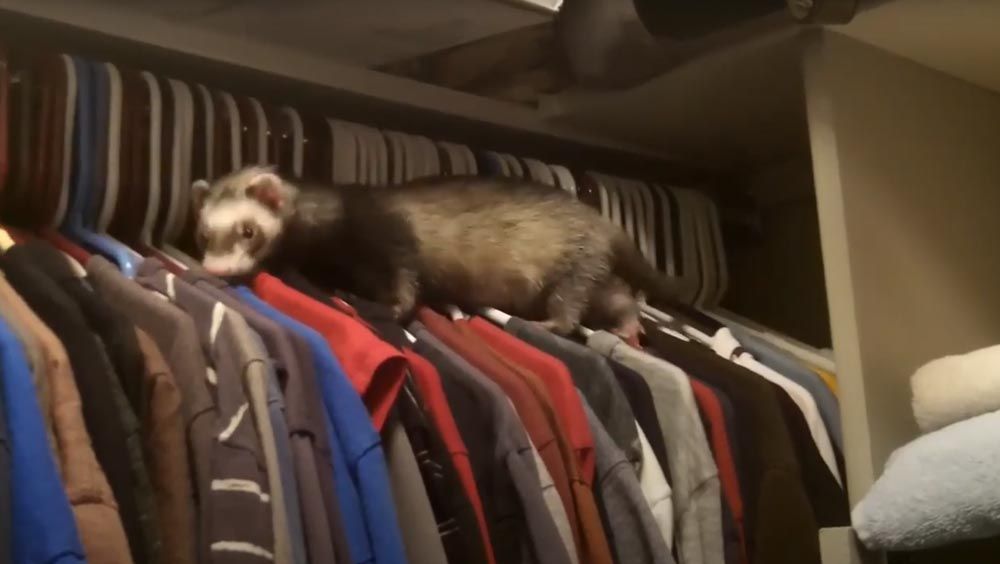 If you’re new to these ferrety tales, it’s fine. They can be read in any order, really. They might make more sense going in order, but I don’t know that it matters. Ferrets are crazy. They start crazy. They end crazy. And that’s how these stories go.

Tune in again next week for more ferret tales! I don’t know when I’ll get back to writing Dungeons and Dragons short stories or just regular short stories in general, but that’s alright. Let the ferrety entertainment continue!

Tango was the second to pull a disappearing act. Around day two or three of having the ferrets was when I noticed a lack of gorgeous red fur running around. I could hear Erin and Teeka having a fight (it was chittering, angry, and oh, so adorable!), but I couldn’t spot Tango. I looked and looked and looked.

At some point, I started going room by room and tore each one to pieces. I confined Teeka and Erin to the cage so I could listen for sounds of Tango without confusing it with their playful clicks and chitters.

Where did I find him? In the master closet. One of us, probably Nick, had locked the poor little fella in the closet all by himself! Undeterred, he’d climbed our laundry basket and curled up in our clothes for a long nap. He was irritated when I woke him up to get him back into the regular parts of the house, so at least that meant he’d been happy with the hideout. Still, I couldn’t have the ferrets playing in our dirty laundry. If the did that, I’d likely wash them with it, and I couldn’t have that happening.

Free again, Erin and Teeka discovered they could hide behind our fridge. They always came out dusty, even after having already come out dusty. I don’t know how they did it, but at least the house was a little cleaner, once I’d washed them off.

Then they discovered they could hide in our bedroom behind the dresser and inside the large dresser drawers. Thankfully they were so obnoxiously loud, and cute, that I’d followed them around and caught them in the act of climbing up and under a drawer from the back of the dresser. Again, this was a tiny hole! Seriously crafty they were.

Teeka often lost Erin by sneaking under our TV stand, which was much too small for Erin to squeeze under. Oh, don’t worry. She heard Teeka as the sneak slithered and clawed about under the stand. Then, just as Teeka chose her point of entry, bam! Erin was there, poking her head at the skinny salt and pepper colored ferret. She’d often get her face bit as Teeka scolded her. They really did have a weird relationship.

The DVD stand was easily large enough for Erin and Tango to go under without too much smooshing of their bodies. Tango enjoyed going under there, but Erin only went under when Teeka did, and Teeka stopped going under as she realized Erin could follow her with no problem. Erin blocked Teeka in at one point, and a very one-sided fight broke out. Teeka won, and Erin shambled after the little twitchy speed demon. I honestly don’t know why Erin took the constant bites to the face, the slaps, the claws, the full body slams. Teeka used that twitch she had to her full advantage and used it as a means of doing multiple successive attacks in a row, and all before Erin could move out of range. Erin was also very dumb and always loomed over Teeka during the spasmodic itching sessions. Erin deserved to get slapped. I mean, no one wants their personal space violated at all times, and Erin did not understand personal space.

This constant ferret and ferrety shadow act by Teeka and Erin made me too complacent. I assumed, far too readily, that wherever Teeka was that Erin was either next to her or rushing to catch up. Then came the day that Teeka lost her shadow. I have my suspicions of how she did it, and I must commend her for her cleverness, I just curse her for the anxiety it caused me as I searched for Erin for at least an hour – the search having come after a long quiet rest by Teeka under the couch.

As I said last time, Teeka lost her shadow (Erin) at one point. Now, when Teeka woke up under the couch, you not only knew who was awake, but you knew precisely when she woke up. Teeka nearly always woke up itchy. It was like all the tiny itches she’s been unable to scratch at while asleep had accumulated and made themselves aware to her as she woke up. I believe this to be true, because she would vibrate out from under the couch with such ferocity and noise that she couldn’t be ignored. I don’t know how she managed to make the twists and turns and somersaults that she did while under the couch (I looked underneath one time with a flashlight), but that’s what she did. Then she’d tumble out and roll around for a minute or so as she continued biting and clawing at every itch on her body. Once done, she’d run off at lightspeed, only stopping for a second to combat that occasional itch.

Anyway, when Teeka wasn’t eventually followed by Erin, I began to worry. There was no way Erin hadn’t been woken up by the sound, the vibrations, or by a ‘stray’ bite from Teeka. Seriously, Erin always slept too close to that twitchy time-bomb.

I looked under the couch, spotted Tango’s foxy fur, and then I really began to panic. I searched and searched and searched. Then, I went back to the first room I’d searched, and I yanked the blankets off the bed. Erin tumbled to the floor, rudely awoken from her nap. That’s right, she’d fallen asleep on our bed.

Now, to be perfectly clear, old ferrets can’t jump worth s*!$. Even young ones have difficulty making a simple jump. They’re diggers, not leapers. That means couches that aren’t fabric, which they can sink their claws into and thus climb up, are safe. So are chairs, tables, countertops, and basically anything above or at the height of the first shelf of a bookcase. That’s what made Erin’s disappearing act on our bed so impressive. She’d had to have found a blanket dangling over just enough to use it to climb up.

Now, I suspect that either Erin had been tenacious enough to never give up and had thus worn herself out in her upwards adventure, which had resulted in her falling asleep after burrowing herself stealthily into our blankets, or that Teeka had been the first to make the climb and Erin had followed.

I mean, I wouldn’t put it past Teeka to have climbed our bed, hidden under a blanket, had Erin follow her, and then escaped over the side of the bed with Erin none the wiser. Either that, or they’d had a game of cat and mouse and Teeka had slapped Erin so hard in the face after she’d been caught that Erin, who frequently became dazed by such a move, had failed to see Teeka make her escape. Then, still believing Teeka to be under the blanket with her, Erin had worn herself out and then fallen asleep, still thinking Teeka to be nearby.

Regardless of what happened, when I pulled that blanket, Erin tumbled out. From then on, we made a fateful decision. Due to the number of disappearing acts in the bedroom, and out of fear of rolling over in the middle of the night and destroying one or all of them, we blocked them from our bedroom. How? You may ask. I’ll tell you how. Well, I’ll tell you how in my next post. But I will tell you this: Sealing that door cost us greatly, and not how you may think.