Tales of a Ferret Owner: A Hint of Things to Come 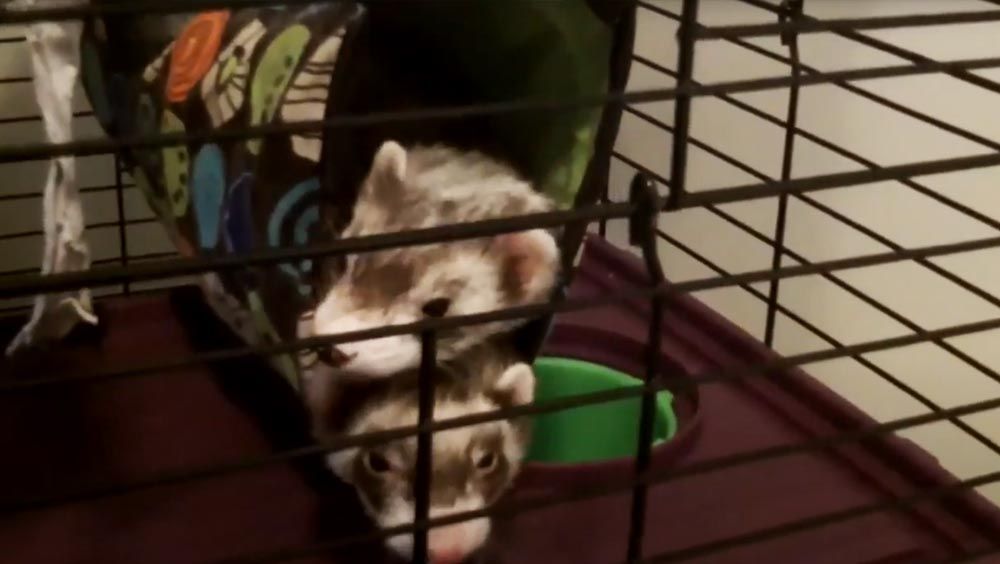 I don’t know about the rest of you, but the world has been pretty crazy lately. Therefore, it only seems fitting to share more of the random craziness of owning three old yet very rambunctious ferrets.

It’s been a few years since the ferrets passed away, so from here on out, things are going to get a little hazy when it comes to chronological order. In other words, I don’t know if one ferret’s disappearing act happened before or after or during the disappearing act of another ferret(s). This post contains just a little more of their ferrety tendencies.

When the five of us arrived home, I was ridiculously relieved. That lasted about five seconds. To be clear, it lasted the five seconds of my husband telling me I couldn’t let the ferrets roam the car and that I had to continue keeping track of them. After all, it wouldn’t have done us any good to keep them in the car in a closed garage only to lose them.

In hindsight, I am SO happy he foresaw their craziness, or I might’ve lost all three of them. There’s a loose panel under the glove compartment box that would have allowed them to escape into the engine. From there, they could have escaped the car, roamed the garage, likely found some tiny hole we didn’t know about, and run loose into the world. I’m not exaggerating here. I’m serious. They would have escaped in less than 24 hours had my husband not told me to keep tossing them up onto the dashboard.

In the moment, however, I was very unhappy with this set of arrangements. Oh, it had been fun at first, then it became challenging, and then it became a real pain in my shoulders, back, and my legs burned, and then the cage was removed from the car and he was back to help.

I hate to admit this, but the ferrets had worn me down, so much so that when our kitchen door closed and they were trapped in the house, I let my guard down.

Now, some animals take time to adjust to a new environment. Take our new Bengal kitten, Evaki, for example. My lovable new kitty was a paranoid, timid wreck when we brought her home. She sandwiched herself behind my bookshelf just to hide from us, and that was when she had a room all to herself. It took daaaays for her to timidly attempt exploring other areas and weeks for her to not run back to her room at a full run when a new (or common) sound startled her.

The ferrets were not like Evaki. They took off at a sprint. I don’t know how long it took for them to disappear from sight. I’ll be honest, I was pretty excited about building their cage. Also, there was their litterbox to set up. Yes, these ferrets were litter trained, just like a cat. Apparently, it’s common for them to be trained that way.

While the cage was being assembled, I don’t really know what all happened. I believe Nick was once again the smart one and had us close the door to my office (their new room) so they couldn’t make too many messes while we set things up.

Right. We had four bookshelves to move. What were we thinking? Anyway, we lost one of them right off the bat. Teeka was the first to squeeze her tiny, and quite possibly anorexic, form under one of the bookshelves. She, true to her sporadic and spastic speeds, could go under the bookshelf in a second or less. Teeka was a marvel to behold. Here one second, then slinking under something and gone in the next.

As you may recall, wherever Teeka went, Erin had to follow. And Erin. Well. Erin was large for a ferret. Being bulky in form doesn’t stop a fat ferret from going under things. It just slows them down. And makes for a very awkward thing to witness.

Teeka’s one second disappearing act took Erin closer to thirty seconds or more to replicate. But by golly, it was the best thirty seconds! She’d pace the length of that bookshelf gap, a gap not much taller than a quarter. She’d scratch at a spot with one front paw, then the other before pacing again.

When she was ready to make the plunge, her head would go from it’s odd little observational tilt to fwoop under the gap. Then her front legs would squeeze under, and that’s where the real fun began.

Like I said, Erin was fat. There’s no sugar coating that. Her narrow head could fit. Her front limbs could fit, but the rest of her sort of had to be smooshed outward. The more her back legs clawed, pushed, and burned rubber (she was desperate to reach Teeka), the more her body became less round and more pancakey, but no less fat. In fact, she became bigger as all her flesh kept resisting going under the bookshelf. And those little back legs! They kept digging into the carpet and propelling her forward. Eventually, the last flabby bits of Erin made it under and then her skinny tail disappeared.

Out came Teeka. That’s right, the little, skinny twerp evicted herself the second Erin finally made it under. I mean, she could’ve at least pretended to take her time coming out so Erin could catch up. But nooooooo, she was out before Erin could even swivel around, or whatever it was she did under there to turn around.

Well, it didn’t take long for Erin to realize Teeka was no longer under the bookshelf with her. I don’t even think she satisfied her own curiosity in exploring the new place, because the next thing I knew, she was scratching, somehow, at the carpet as she tried tunneling, maybe, out of the space.

Let me tell you, Erin never looked thinner than when she stretched, pulled, clawed, and swiveled her way out from under something. Her skinniness, in those brief moments, put tiny Teeka to shame.

Once free, Erin went waddling off to chase the pipe cleaner spaz, who had just slipped under a different bookshelf. I don’t think Erin caught up to Teeka during that first half-hour or so. Poor dear. She tried so hard.

Ok, now you may be wondering what Tango was up to as the other two entertained themselves with an unfair game of tag. He watched. And when he was tired of watching them, he entertained himself with climbing the unfinished cage. Yeah, there was nowhere to go but down once he reached the top of one wall. Turns out, ferrets bounce a little and are very resilient. Also, they aren’t terribly smart, because he continued making the attempts. The only thing that saved him from bumps on the head came from saving hands from either myself or Nick. We would’ve helped him the first time, but neither of us thought he’d actually jump. I should have known better. Most of my experience with them, at that point, had involved them flinging themselves off the back seat of the car.

Well, in the end, we assembled the cage, stuck them in it, made sure they knew where the bathroom was, and then we moved the bookshelves out of the room so they’d have more space. We let them loose to explore that room as we searched the house for potential weaknesses.

We thought they might fit under the couch and maybe a few other spaces with gaps, but they were all safe, as far as we knew, for exploration. We thought we’d found all the weaknesses. We thought it was safe to let the ferrets loose. We thought we could keep track of them. We were wrong again! No surprise there.