Northeastern US Road Trip Part 5 of 6 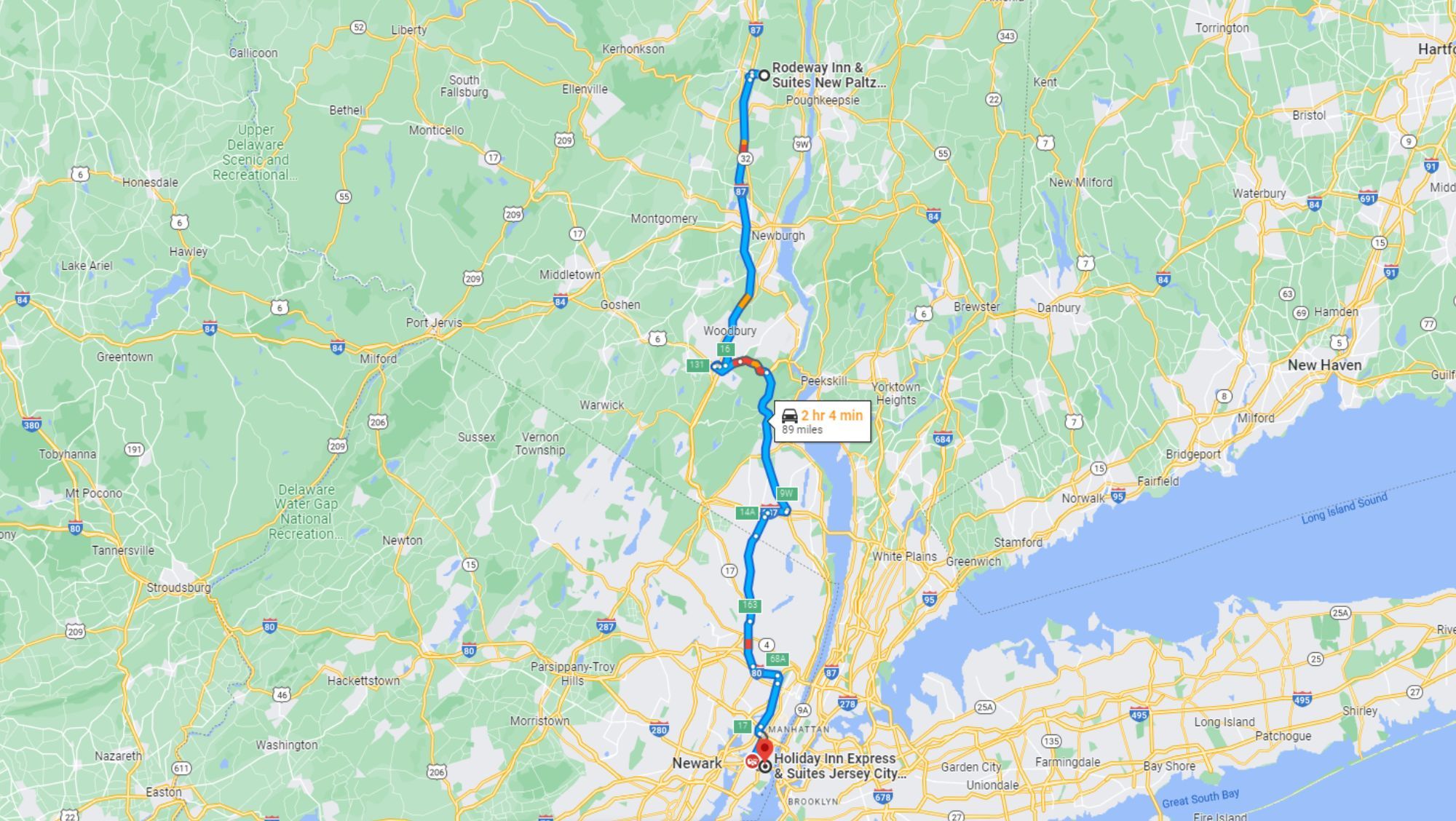 Happy post-Thanksgiving! Hope your week has been wonderful and full of blessings. Not to mention food. Speaking of food…

Oh, my goodness. There is so much to tell about this part of our trip. It makes sense, considering the days that I did join in on walking around or taking the subway trains, we were averaging 10+ miles walked in a day. You better believe I was sore!

As such, those days that I didn’t spend recuperating in my room, a lot would happen. I’m going to miss a lot of things, but I’ve broken it up into a few different categories. Feel free to skip ahead to the photos or to the sections that you’re curious about. You won’t hurt my feelings if you do :) 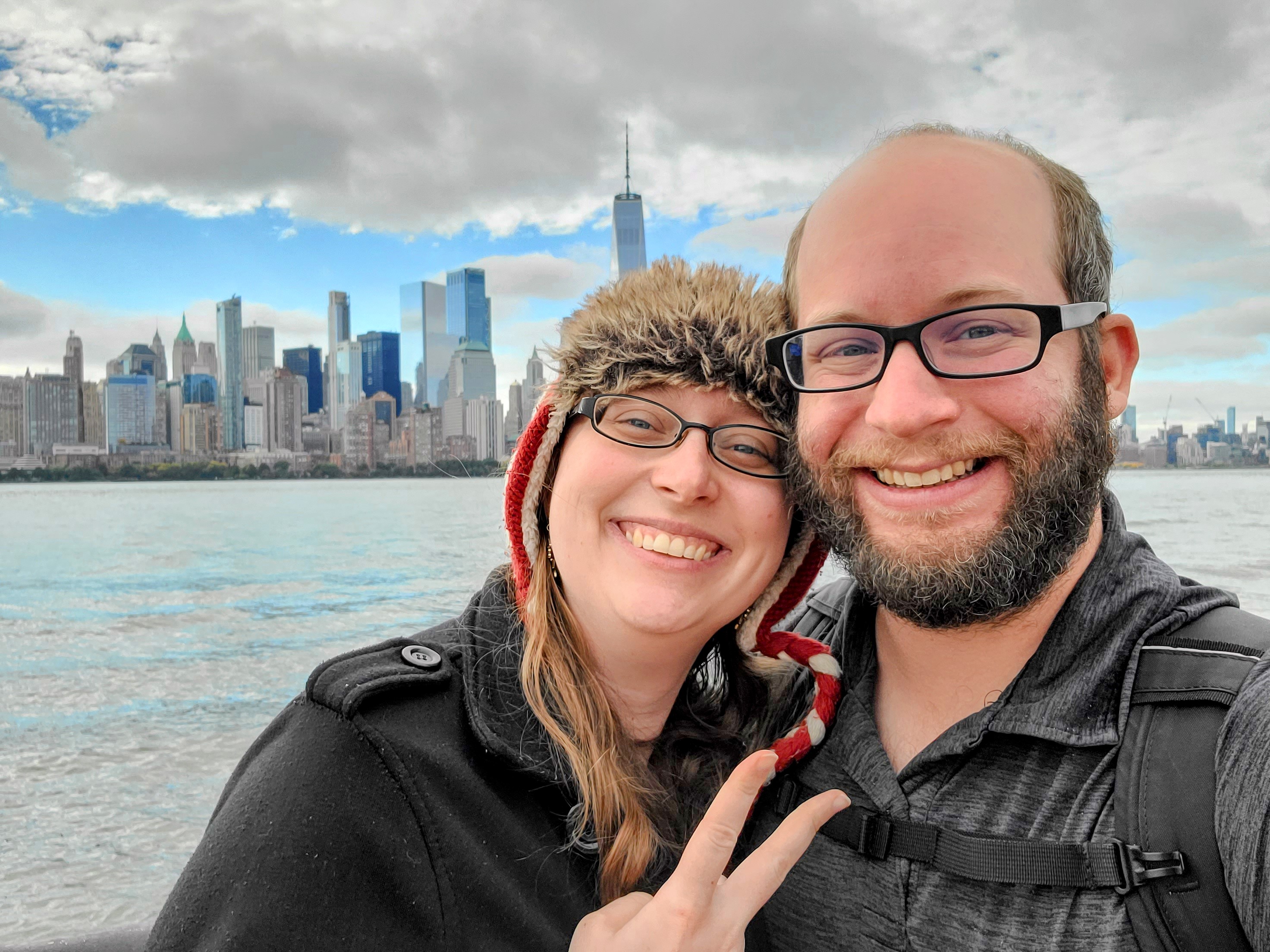 Yes, we spent a solid four days in the New York City region. Technically, we had our hotel on the Jersey side of things, but it only meant more walking and more yummy places to visit. Plus, I had fun exploring the Target near the hotel and stocking up on snack and food supplies on the days I stayed inside.

Wondering why I let my husband wander around alone? Well, like I said last time, we weren’t alone. We had visitors with us. Nick’s dad and brother joined us on our quest for delicious food and sightseeing.

Starting with the sights

I bet you thought I’d start with the food, ha! No, the food was scattered throughout, so I just shoved it into a section. Because so much happened, and because I didn’t take great notes, these places may be out of order, in chronological terms. Anyway, here we go!

First up is the travel and arrival day!

This happened way faster than most of our other stops in the trip simply because we were already in New York (New Paltz, NY). From there, it was roughly a two-hour drive. Why yes, we did stop at Speedway gas stations for that elusive unicorn inflatable koozie. Did we find it? No. No we did not.

We made it to the New Jersey side of New York and had some time to eat up as we couldn’t yet check into our hotel room. So, we visited Liberty State Park and took some time to pay our respects at a (not THE) 9-11 memorial as we also did our best to look for Lady Liberty. We were soon joined by Mark and Adam as we all enjoyed the New York skyline. 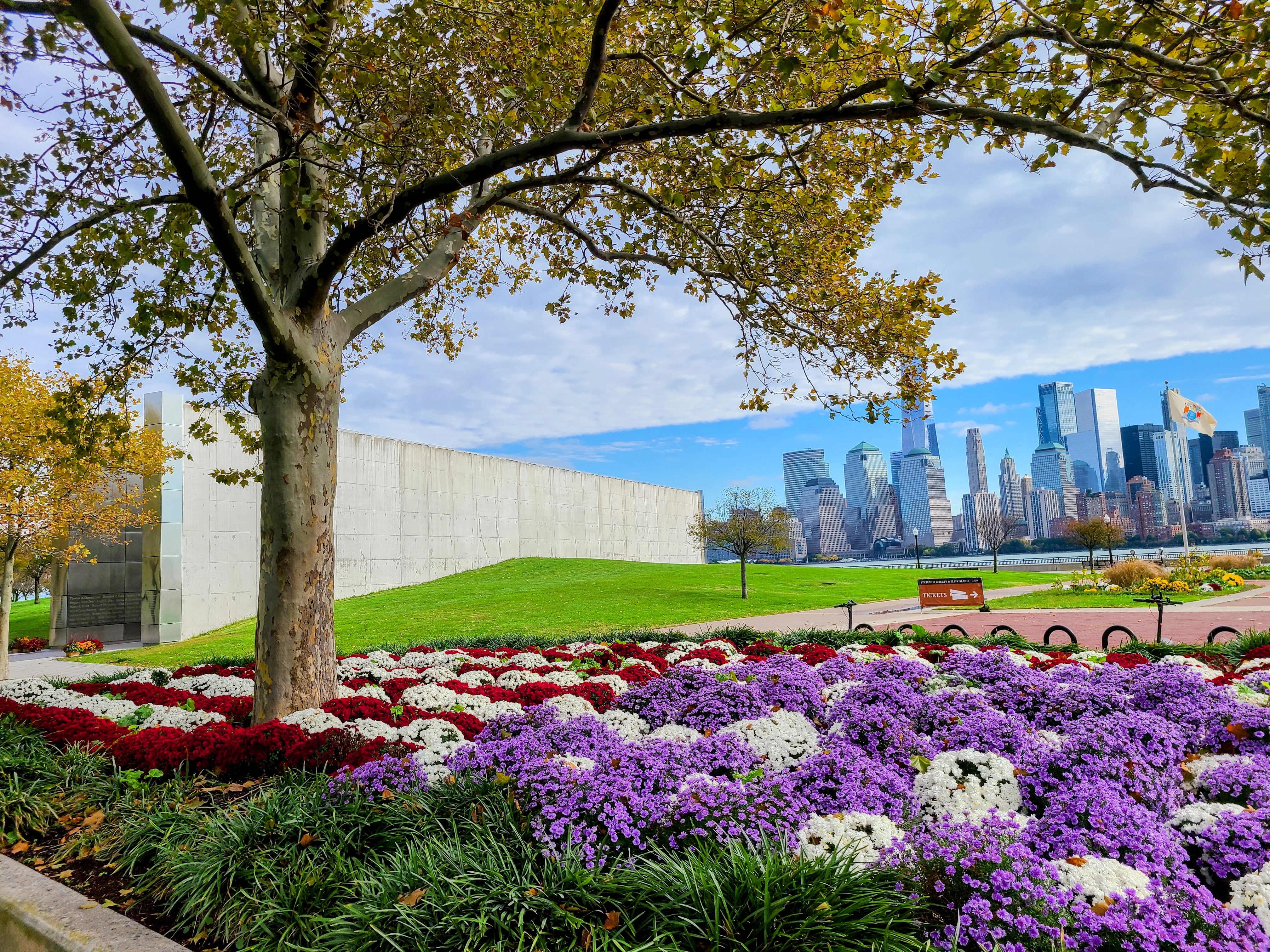 After the park, we were able to move into our hotel room early. From there, we decided on Tony Boloney’s for lunch. Yes, I will go into this later on. Anyway, from there, I enjoyed shopping at Love Locked, a super cute store with plenty to offer! 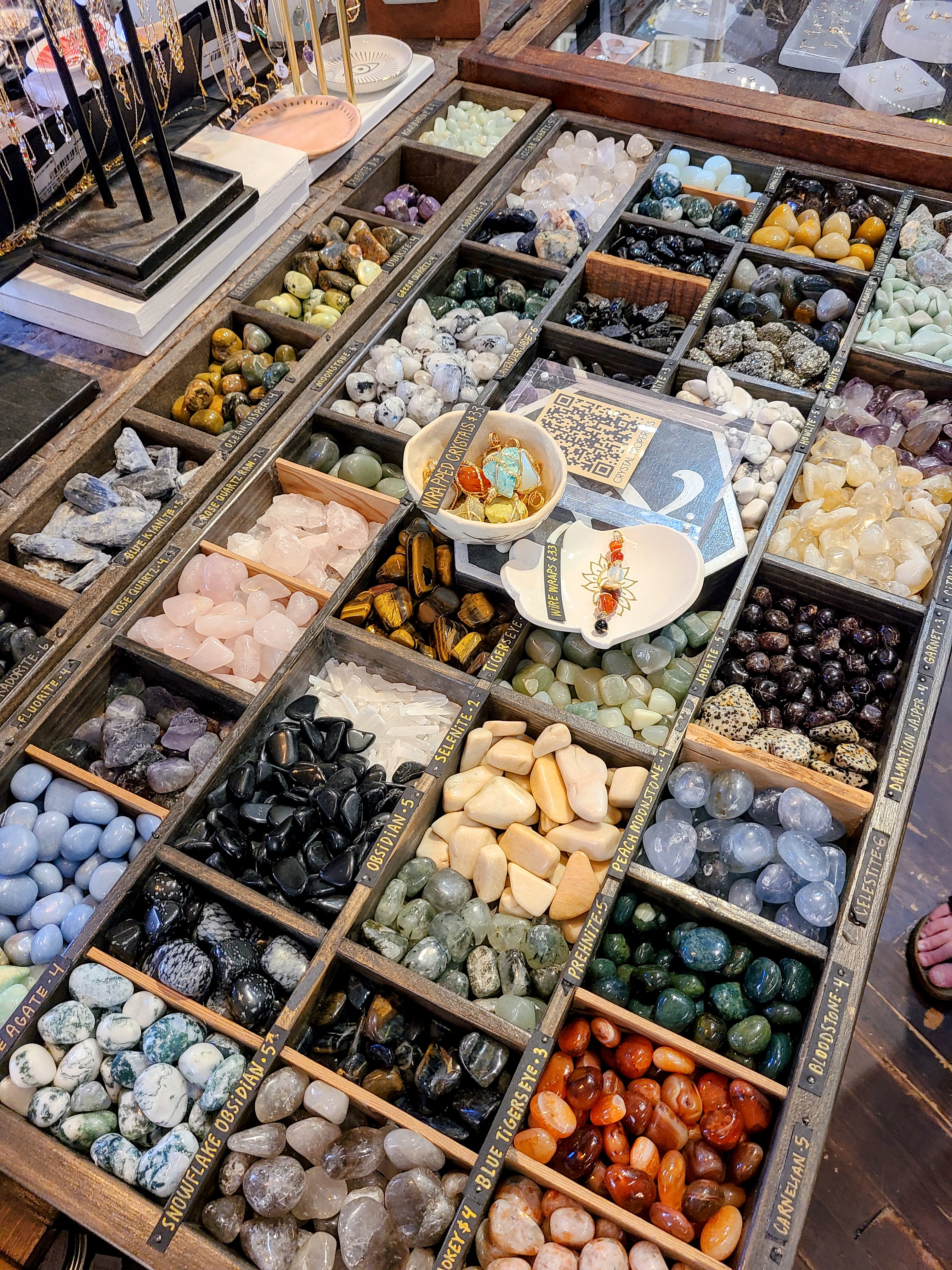 They had a variety of stones, jewelry, oils, and more. I couldn’t help but purchase an Apatite stone. It was just so pretty and reminded me of the ocean. For a bit a fun, here’s what the stone ‘means’, if you enjoy that sort of thing: Apatite stones have been attributed to decreasing hunger or appetite as well as providing a boost to insight, creativity, and learning. Fun, right? 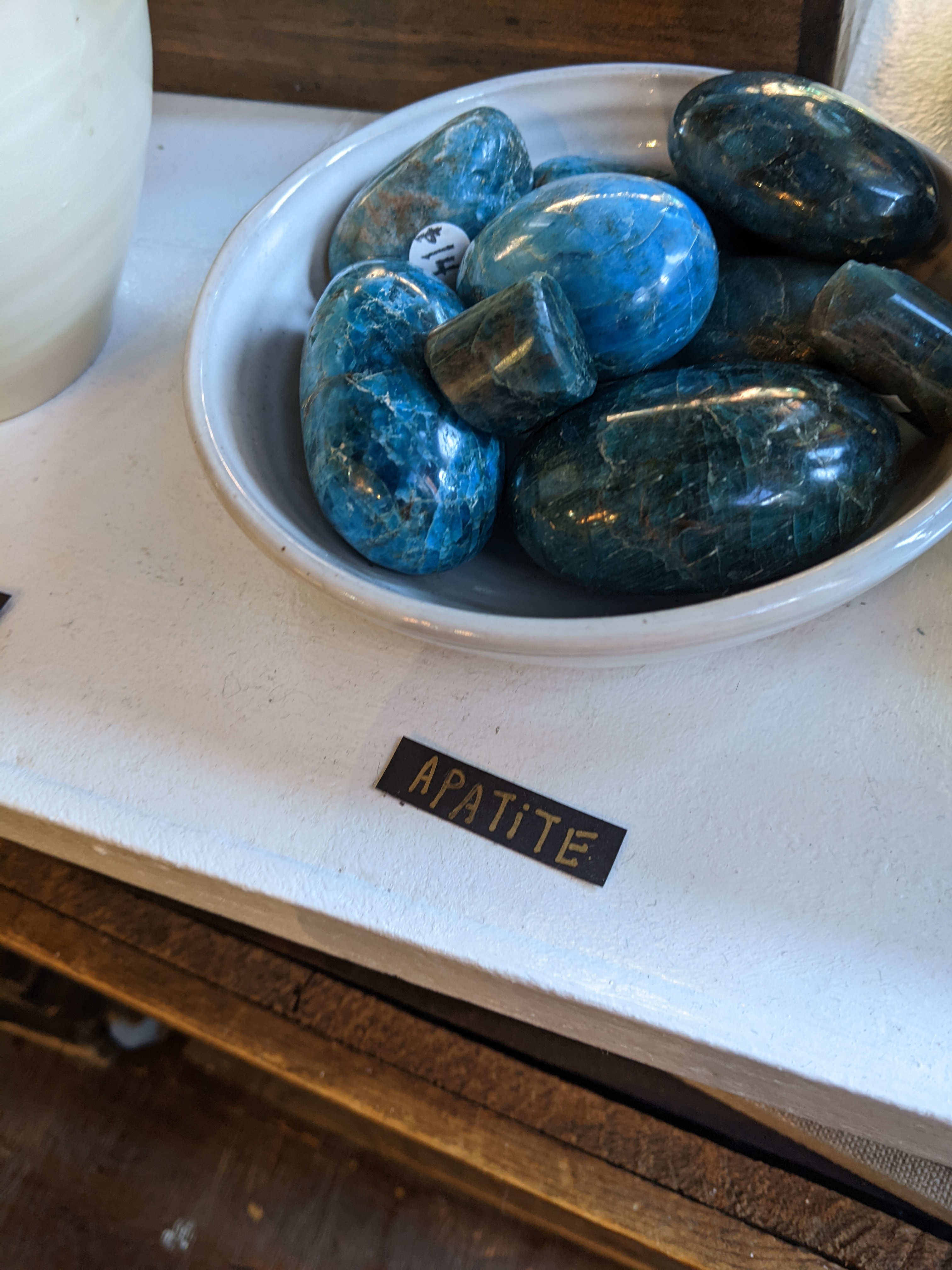 We went to several train stations, including the super white WTC (World Trade Center) station at one point, but the photo below is not that. It was too odd of a look to me as it has the look of a spine and ribs, so I don’t have a photo. Anyway, the photo below is of Grand Central Terminal. It was just fun to share because Nick and his dad took a selfie. So cute! 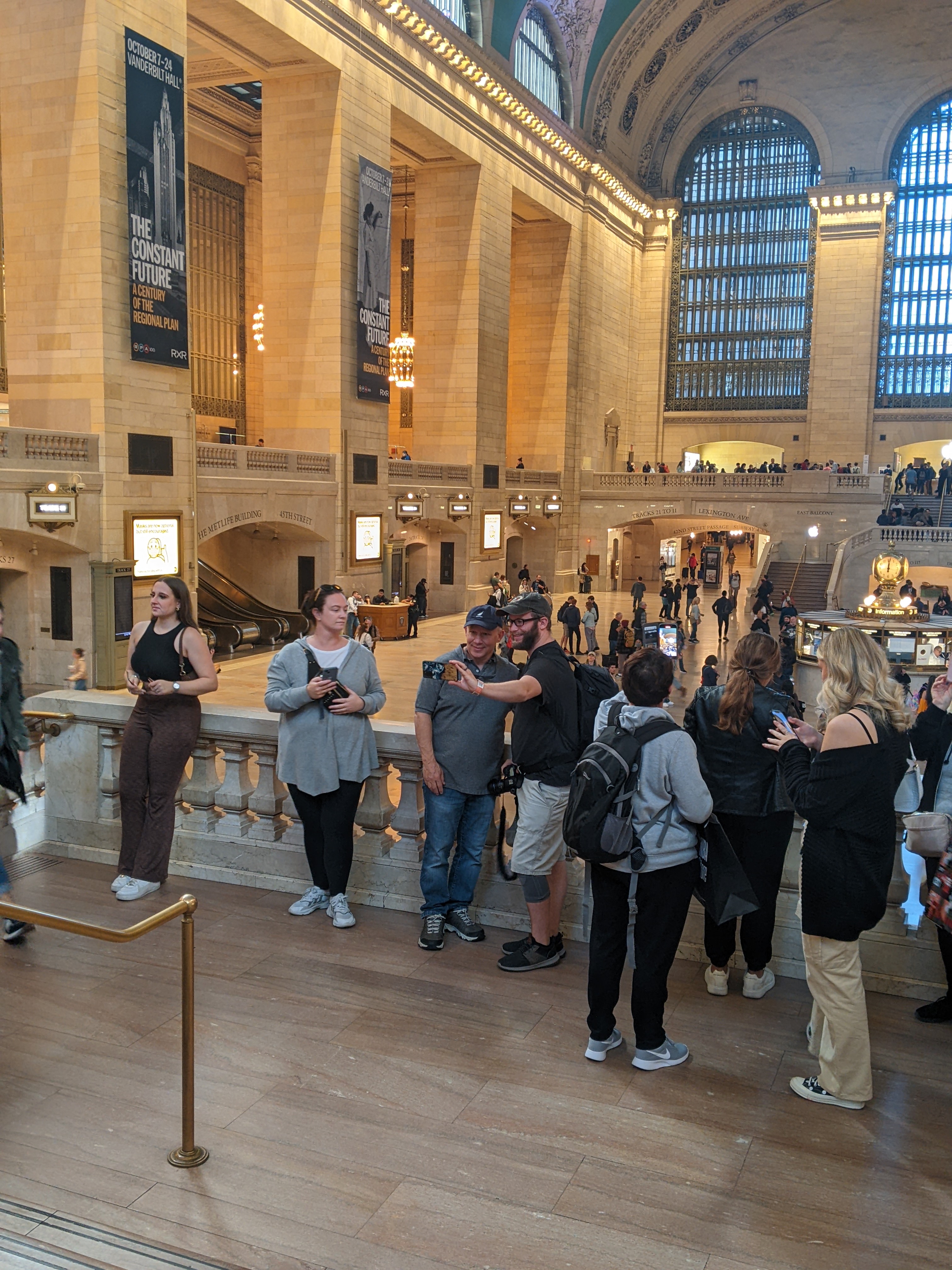 The Charging Bull of Wall Street

We then checked out The Charging Bull. It was alright. The line for it was beyond ridiculous. Oh, and the line for the front was much shorter than for the back. Yes, that’s what I said. Apparently its dangling bits were far more appealing than the horns. That was amusing, but otherwise, it was just a golden animal statue. No, I didn’t get photos of this one.

On the way to the ferry, we encountered the funny graffiti below. It was a fun way to end the first day. Oh, and did I mention the ferry was free? 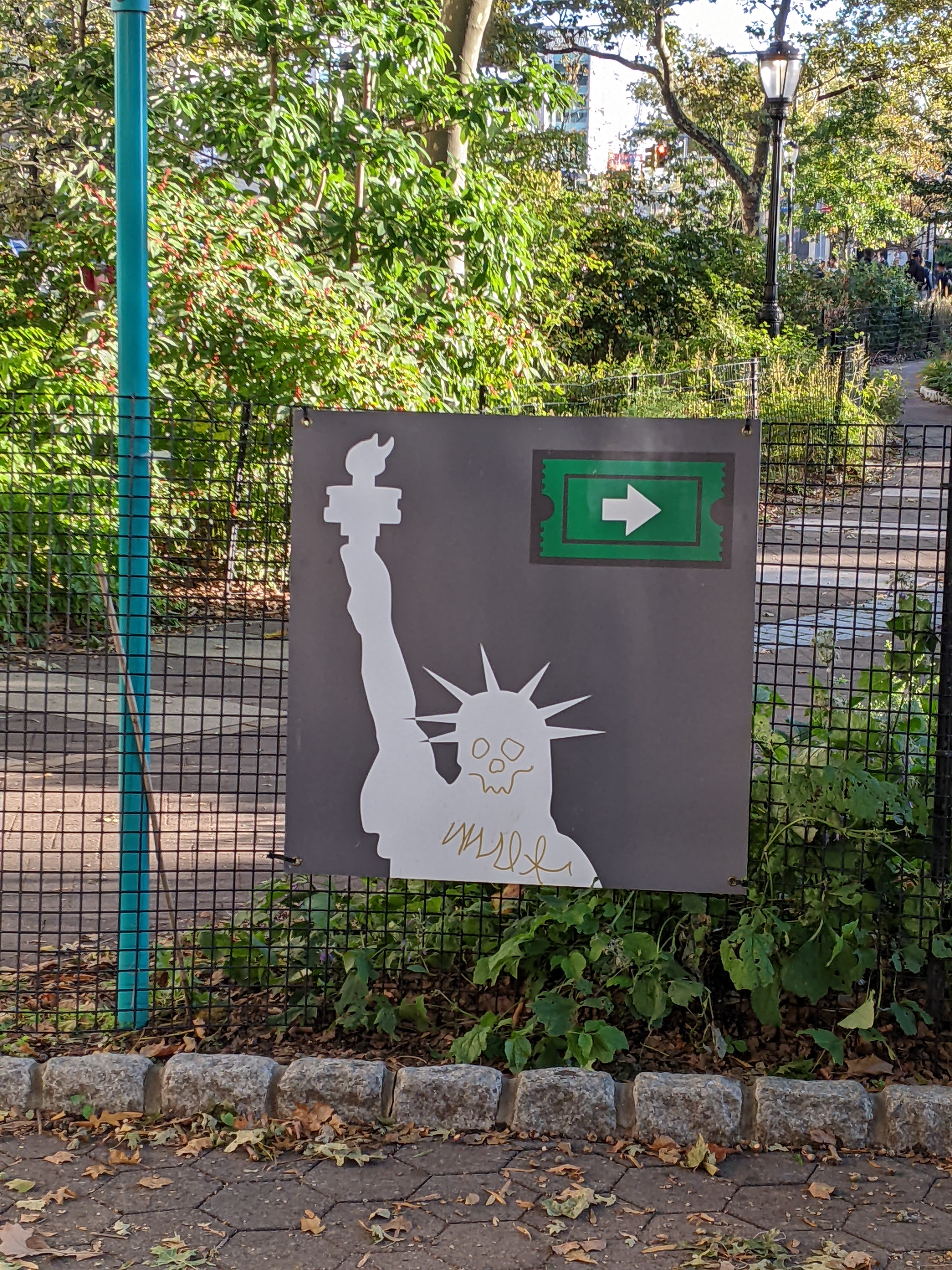 Next up is day two and three!

The second day I spent mostly indoors. I did enjoy a short excursion out of the hotel and to Target. But for dinner, well, I’ll save that for the food section! You can be certain I found something better than a quick meal from the grocery section. Later, after dinner, Nick and I enjoyed some time back at Liberty State Park, for some fun night shots.

From there, it was on to the next day. I know, the day before was a bit of a let down, in terms of what happened, but day three more than made up for that!

We had to get up early and hike through city streets and take some trains to make it to our early appointment for this experience. It’s expensive, like $65 per person, but it was fairly fun. It’s a building with the top floors having a mirror floor, an overlook floor, some mirror art and floating balloons that seemed to float up and down, it was a lot of fun. Oh, and we took an elevator up the side of the building. It has a glass floor and a full viewing area in front. Behind you are the visible gear track that the elevator climbs on the side of the building. It’s not for those faint of heart or timid of heights. 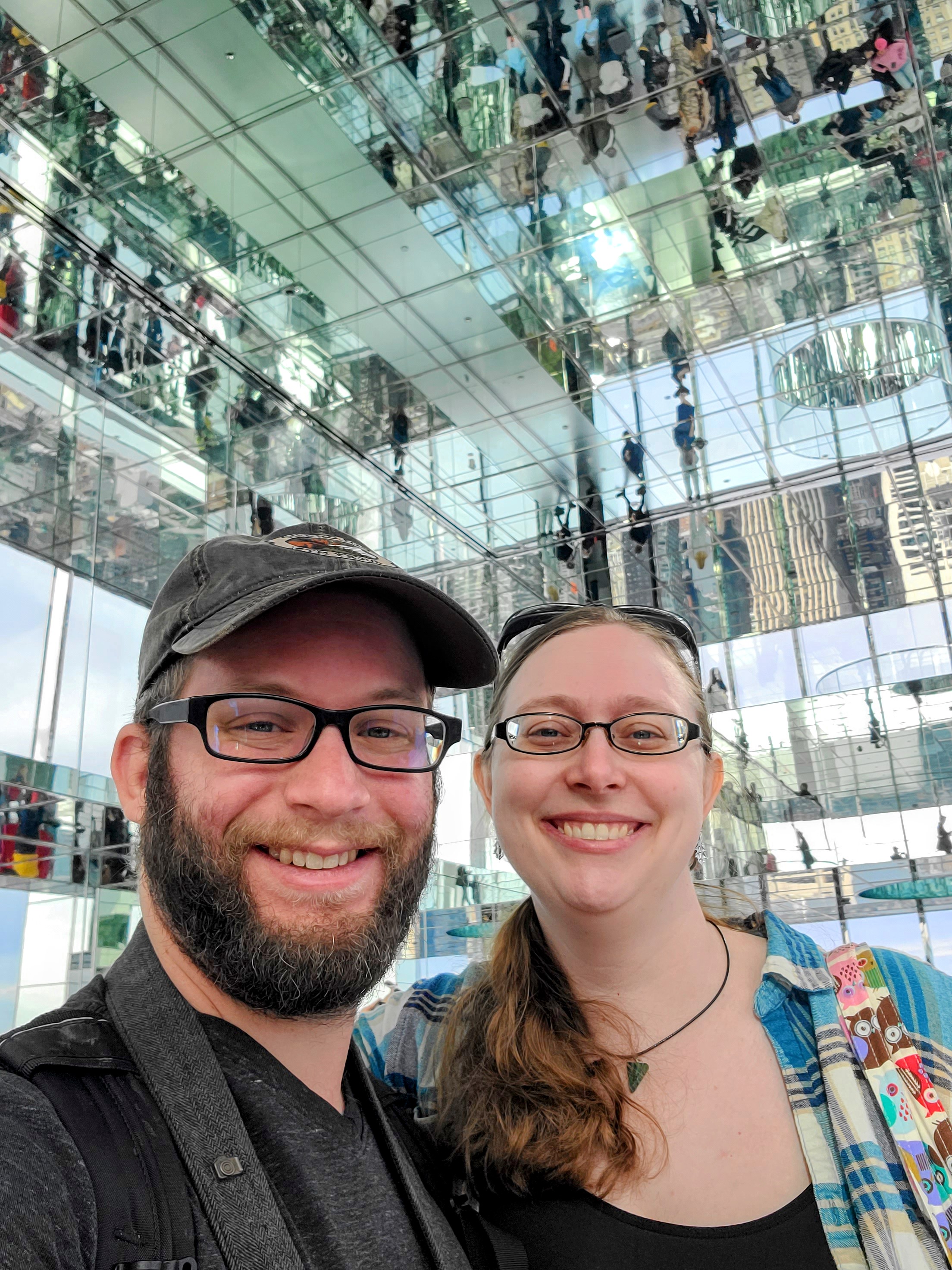 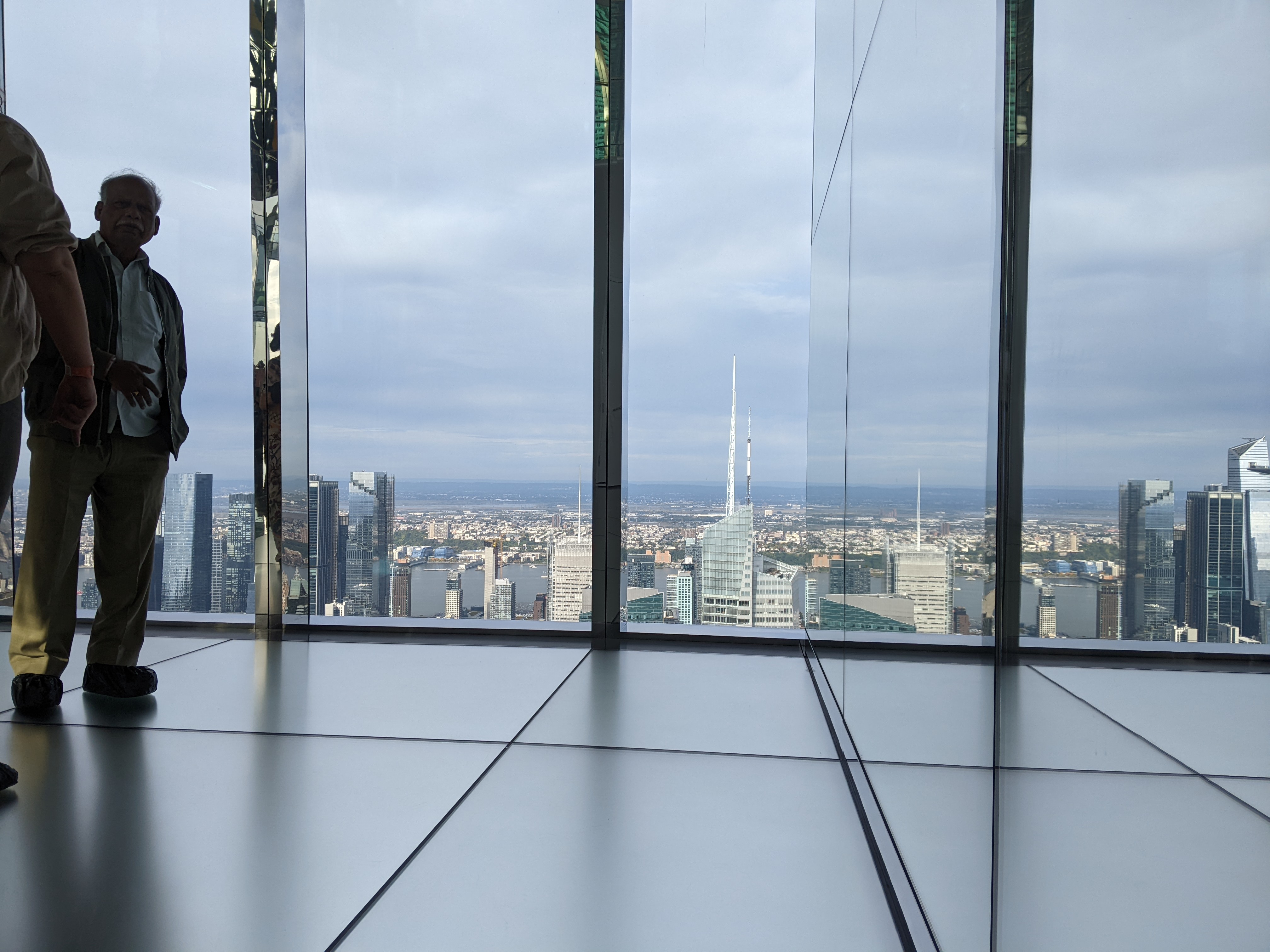 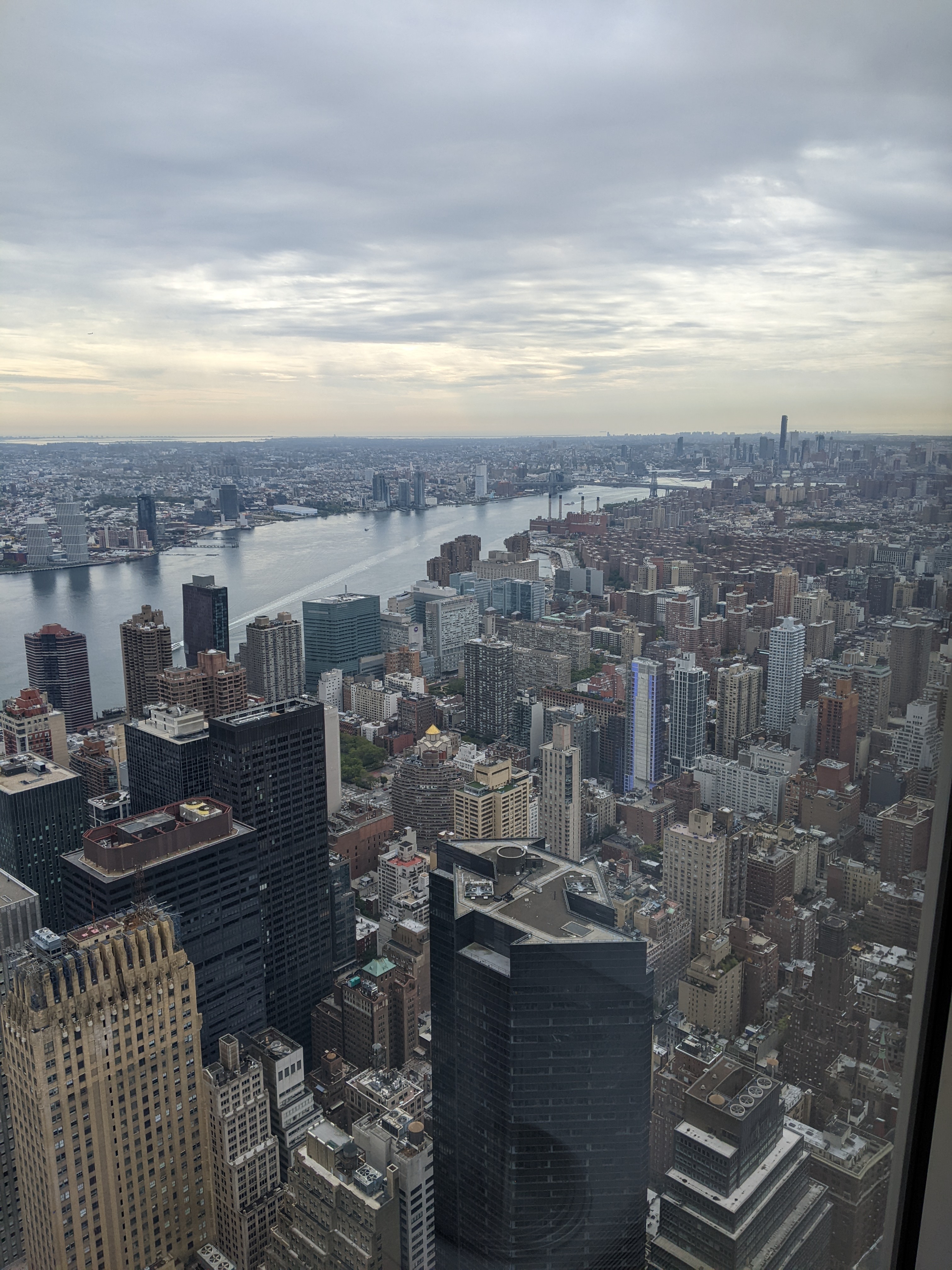 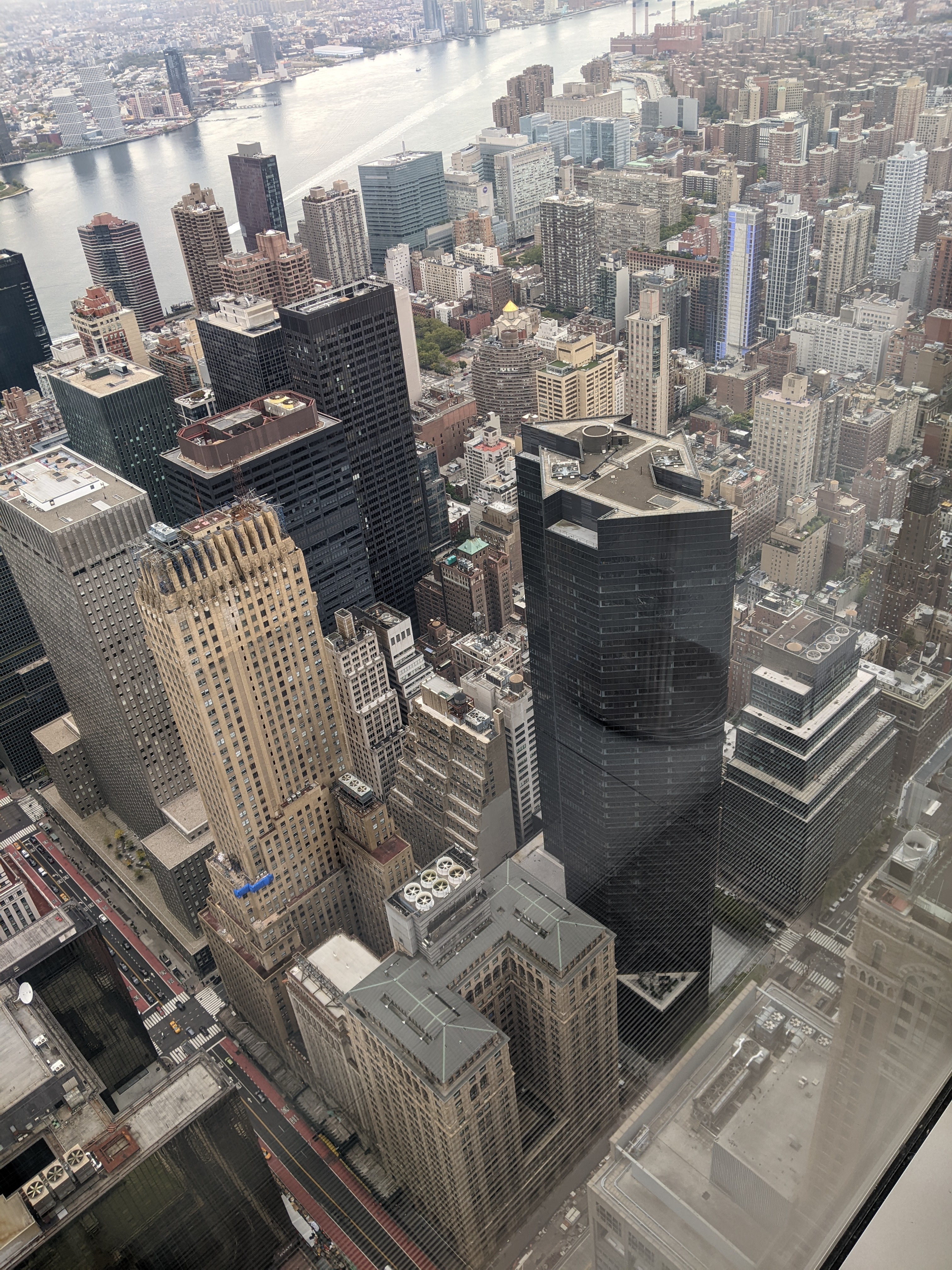 This is where things got a little crazy. Nick was busy taking photos of the bridge below, but then his camera died. This was all before we even reached the bridge shot he wanted, and it's where the chaos ensued.

Nick had used the last of his charged batteries, well, all except for one…which was broken! So, he started going around and asking other photographers for help, basically a battery swap. He swapped one of his drained batteries (a good one, he’s not an ass) for a charged one from a stranger. As a bonus, the guy used him in a shot he needed. Hence the photo below. 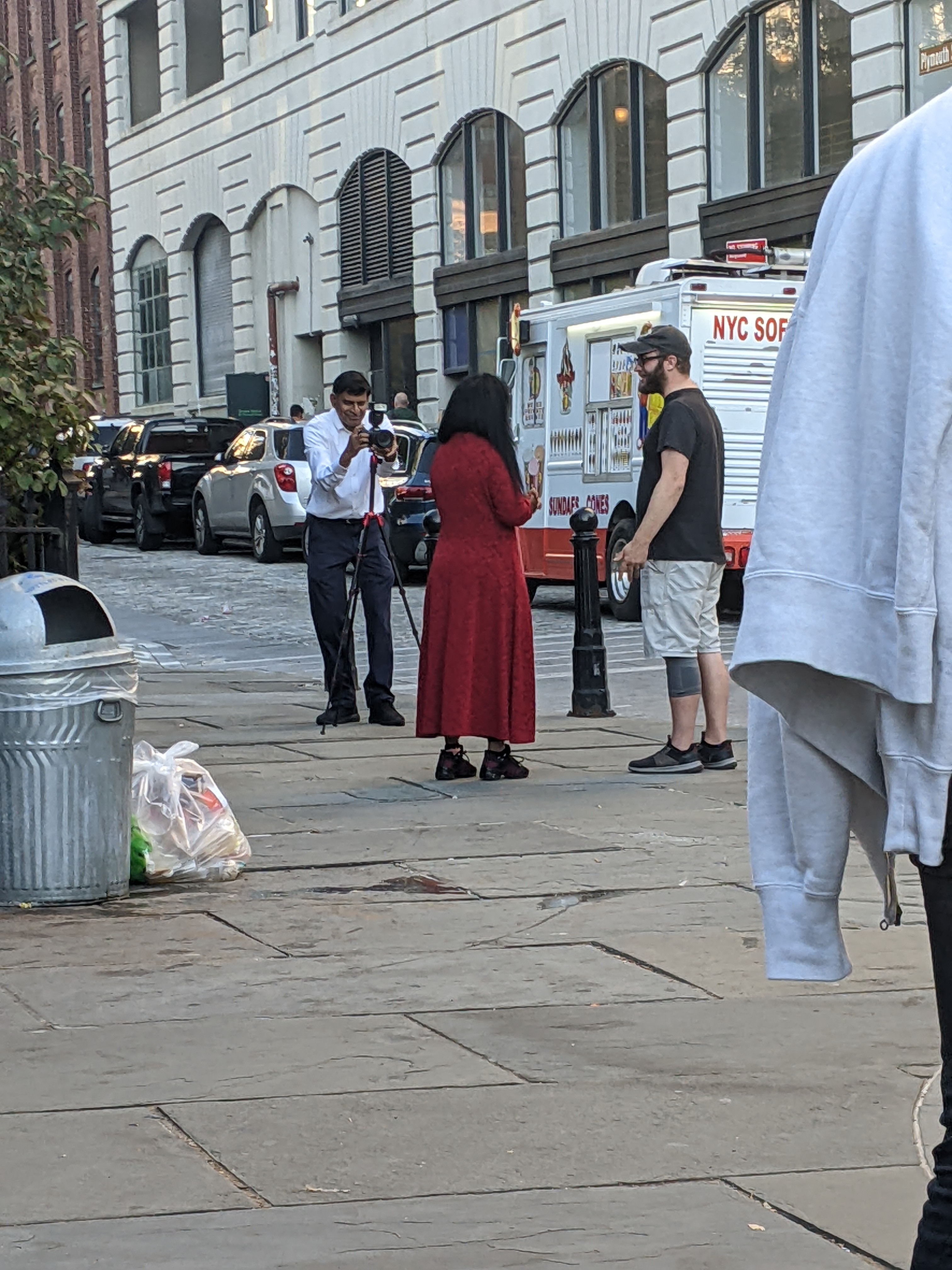 A bird and some flowers

As this was going on, I had a pigeon wandering around my feet. Hence the pigeon photo, lol. 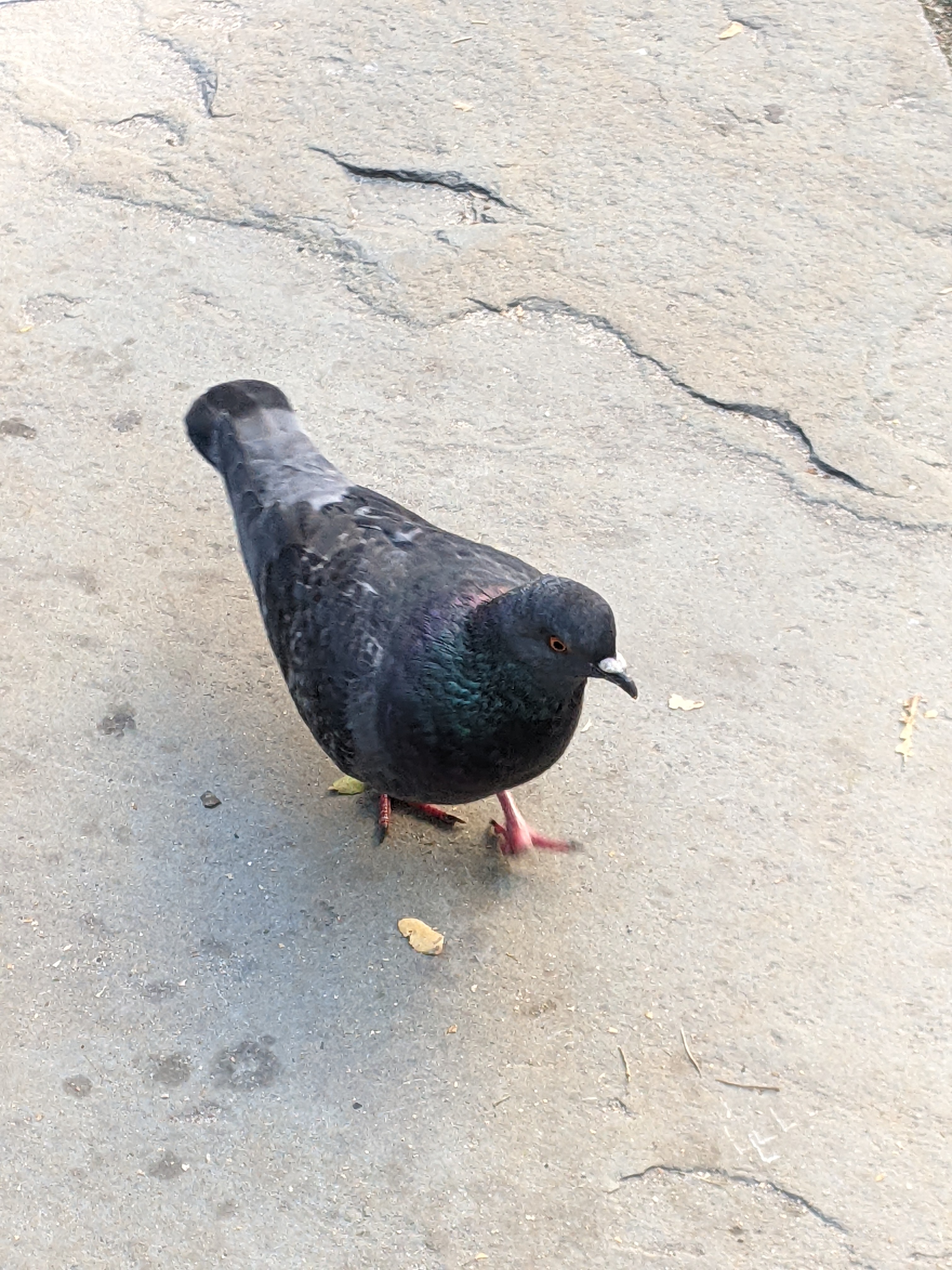 Nick continued to seek out a good bridge shot, and then I came across the flowers below. The light from the golden hour was so fickle, that Nick couldn’t get a comparable shot, despite having the better camera, and the skill. Tee-hee. 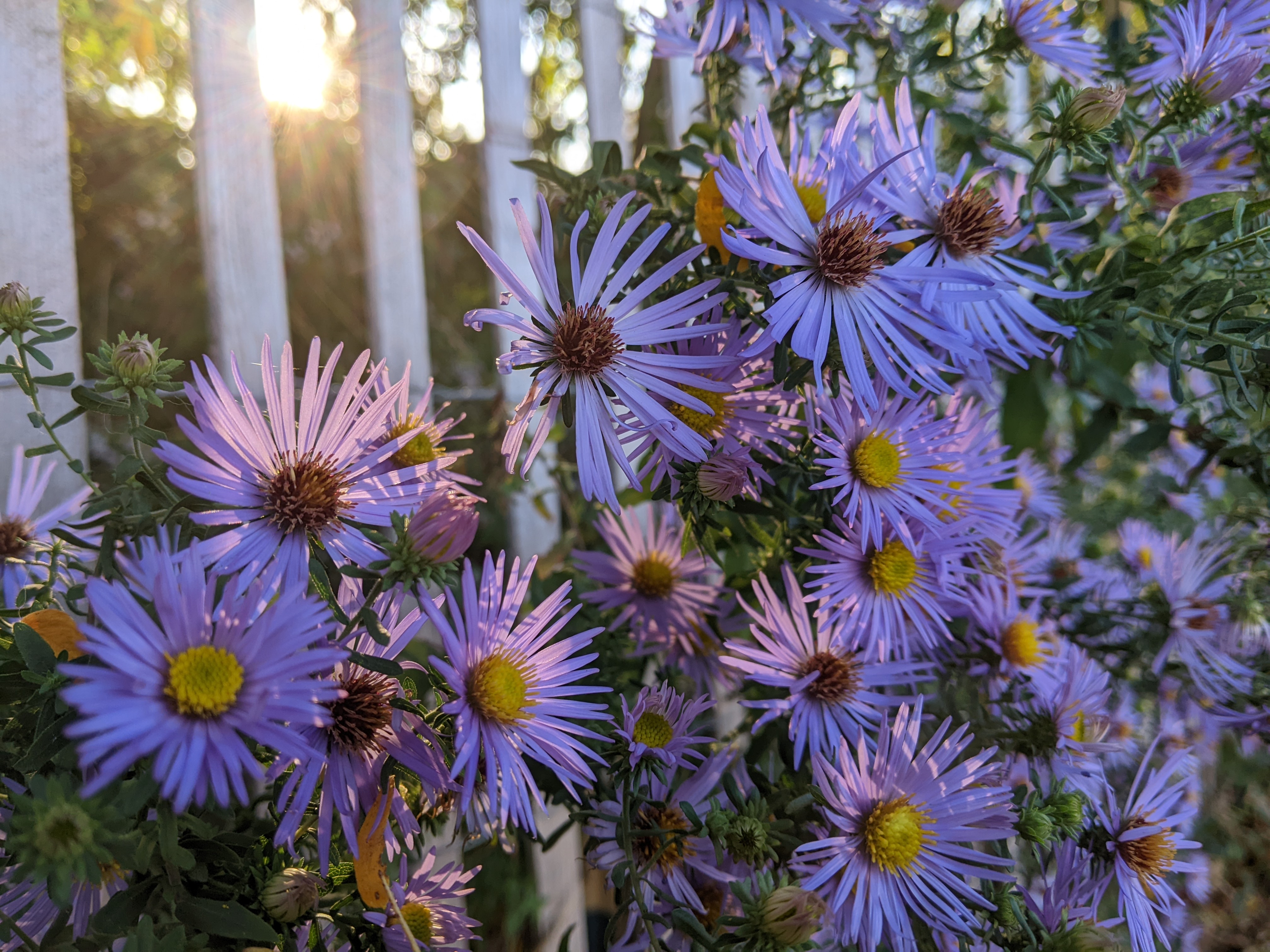 Once again, I spent a very restful day in the hotel. Closer to the afternoon, Nick returned after seeing Mark and Adam off. At that point, it was all about the food we could sneak in before heading out the next day. And now, for the food!!!

The food, and not even all of it

Yeah, there’s just too much food to mention, so I’ve narrowed it down just to a few, lol. The first on the list, of course, has to be a pizza place.

This was by far the best pizza place on my trip. It was also the first place we visited for food. They aren’t even located in New York, but they’re still that amazing! We tried maybe six different slices of pizza and a very delicious full rib-in sub, which really did come with the bone and all. The meat was so tender, the bone could be pulled out with ease. Pictured below is our favorite, the Detroit-style pepperoni with honey and pesto drizzles. 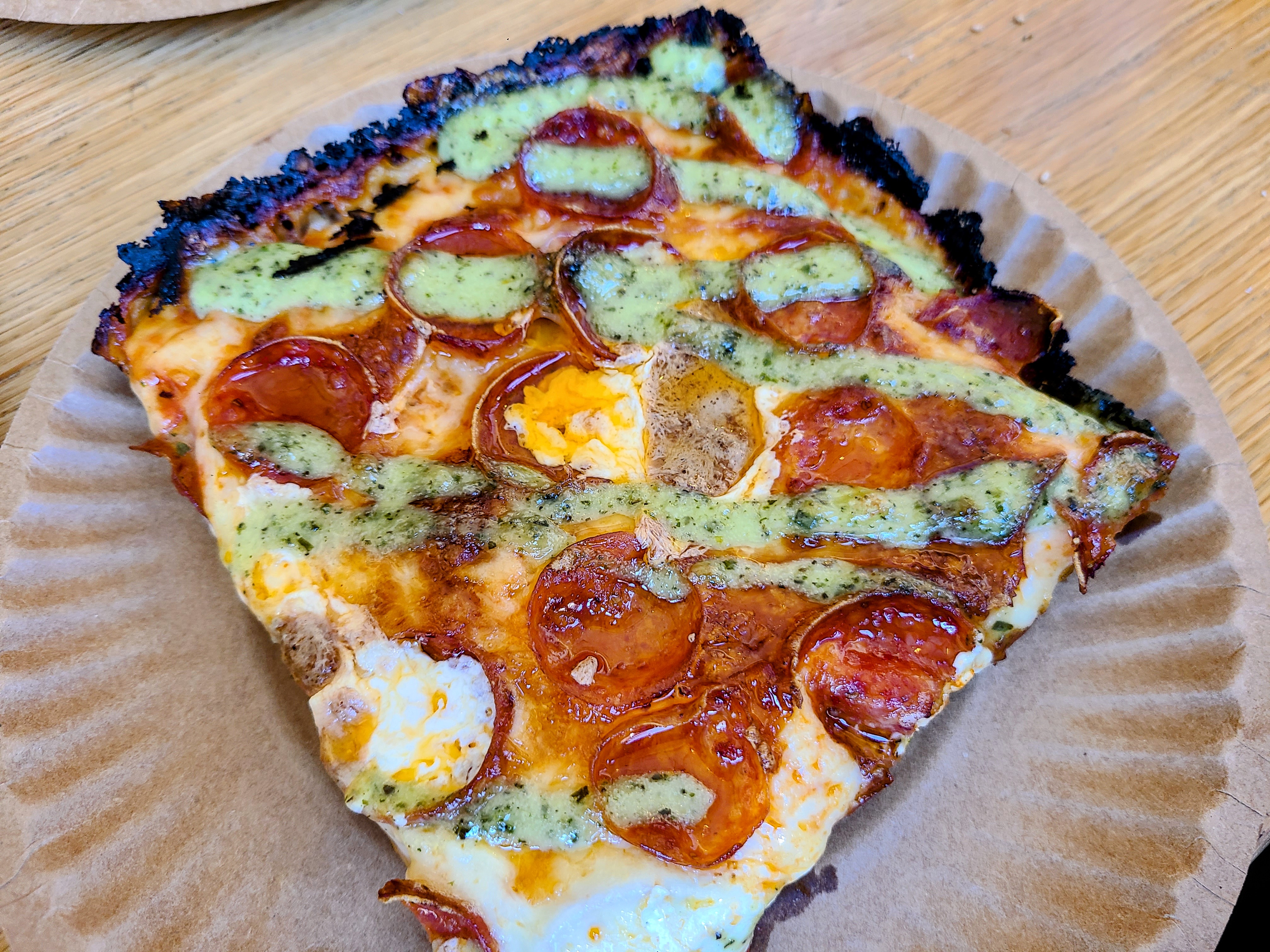 We found this gem on day two of our trip. Or, I should say that I found this place. It was like a two-minute walk from the hotel room, and I was still sore from the day before, so yeah, I might have been a bit biased on where we went. 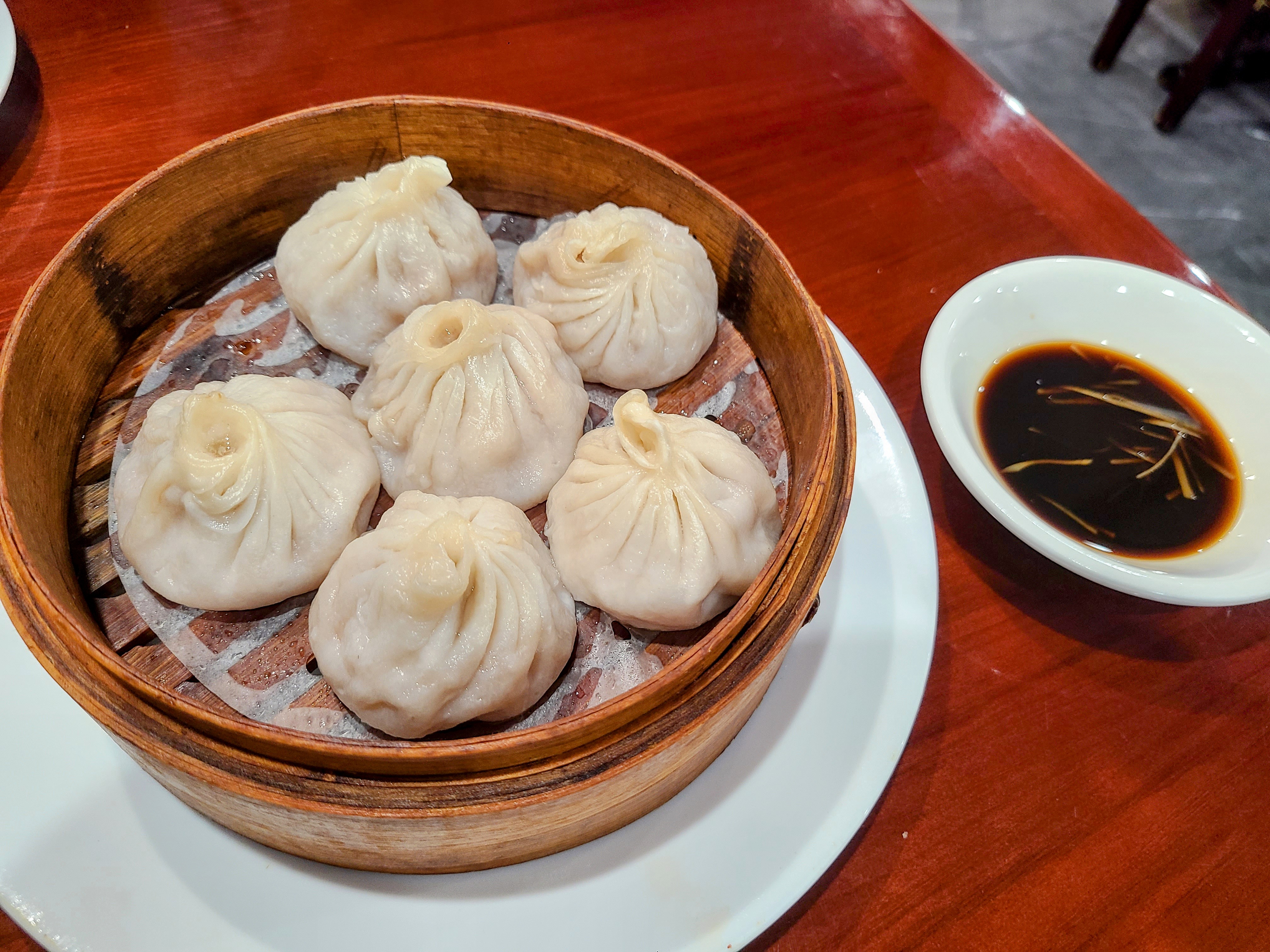 I will say this, I don’t think I’ve ever had so many dumplings in my life! We tried what, four, five different types? There were two similar ones with a golden yolk custard filling (one fried like corn bread batter and one a very fluffy white). We also tried a fried pork dumpling, and I had my first ever pork soup dumpling! Plus we enjoyed boba tea and a fantastic yang zhou fried rice. Anyway, we had so many dumplings at our table that our waiter took notice, lol. Such amazing service and food! 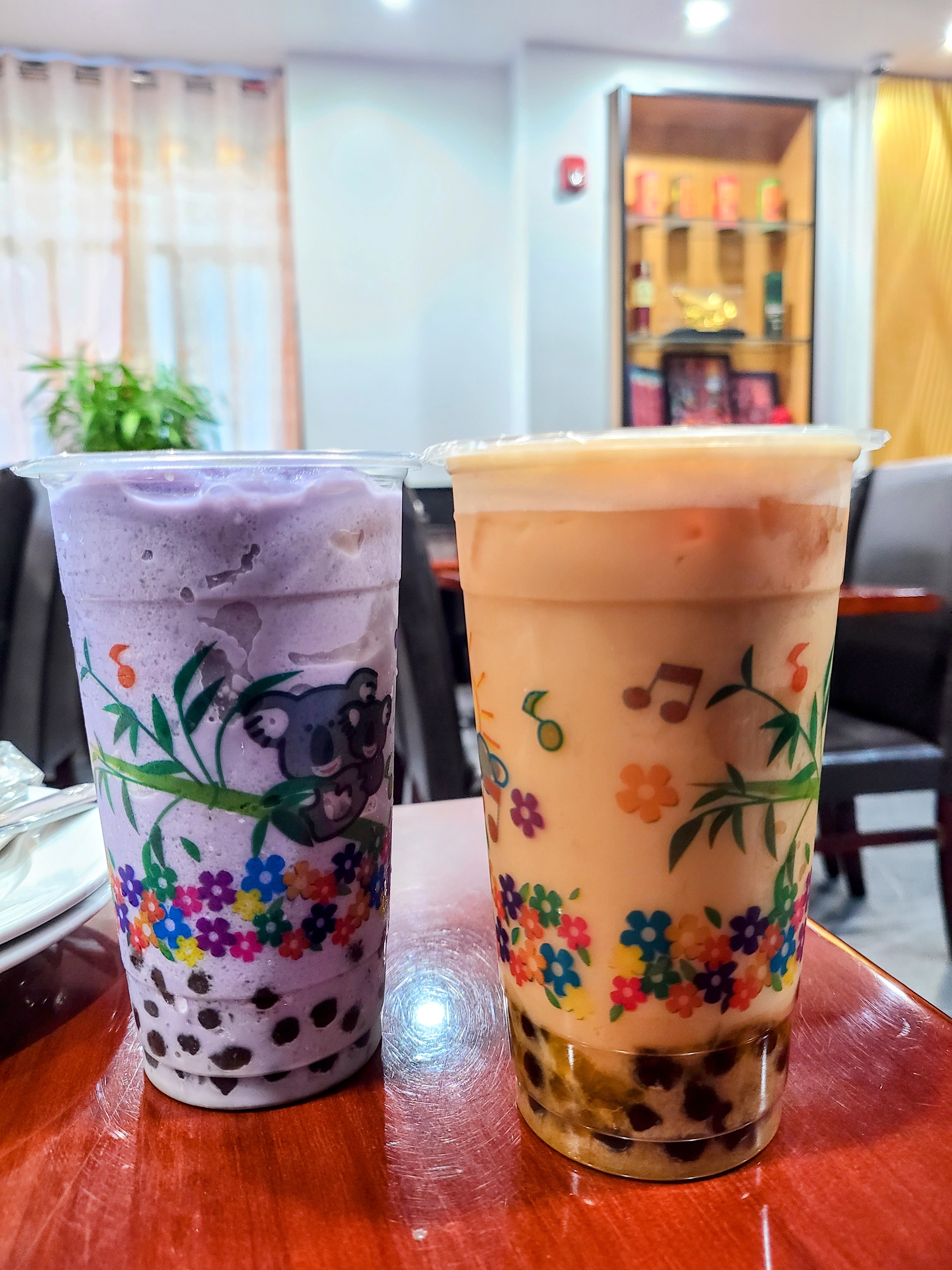 This was the 6am to like 11pm day of walking all over the place. I remember, because it felt nice to finally find a place to sit. The food was alright, but being able to sit was the best. Don’t get me wrong, the pizza was good, but it just wasn’t my style. I will say that it was fun sitting at the bar and watching the pizzas being made.

After L’Industrie Pizzeria, we sought out some dessert. I was not enthused, but I said sure. Who could resist ice cream? I tell you what, it was some of the best ice cream I’ve ever had! I ordered chocolate flavored because I wanted something familiar after a long day of new things. It really hit the spot. I don’t know exactly what was going on with the dough, but it meshed so well with the ice cream. I wish we had this restaurant near where I live, because it was so amazing. 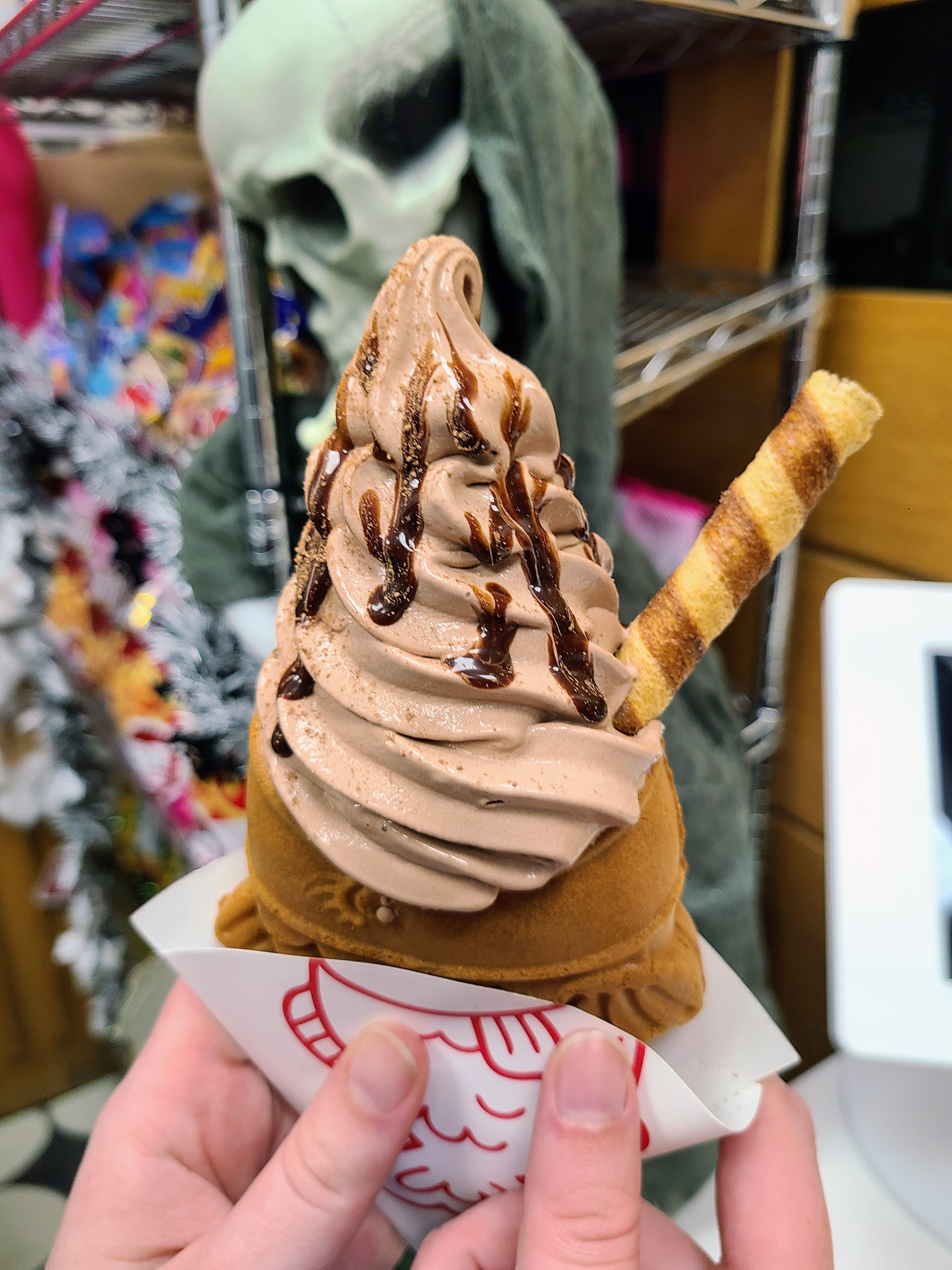 This restaurant was only about a fifteen minute walk from the hotel, and it was worth the walk! And that’s despite the serious amount of walking from the night before. Anyway, they had some amazing Szechuan and Hunan cuisine, like wonton in chili oil, pork belly and cucumber with oil, Mongolian beef, and a pork noodle dish.

After an amazing dinner, it was time for some amazing tea, and Möge Tee delivered! It was a wonderful end to a wonderful trip. 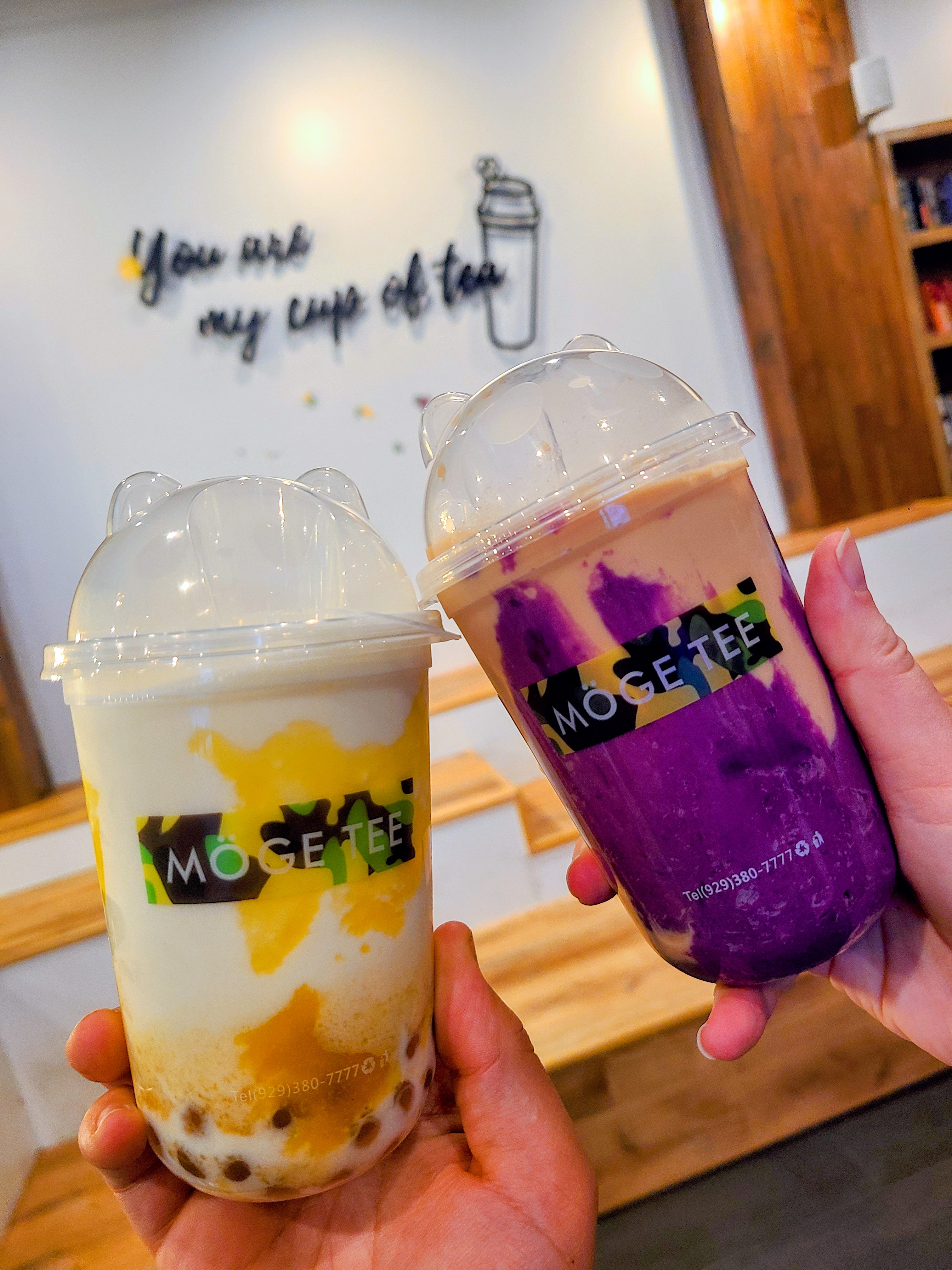 But the trip wasn’t over yet. Well, actually it basically was. Really, my point is that the surprises weren’t over.

The surprise at Taiyaki

Yeah, that ice cream shop with the fish cone. You remember that? They had the item I’d been searching for, the inflatable unicorn koozie! AND I GOT IT!!!! 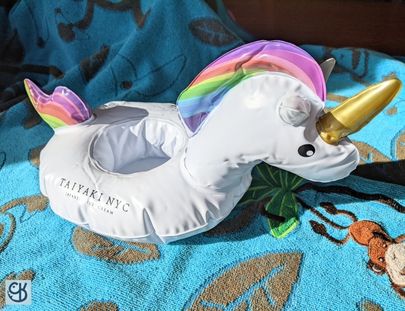 So, there we are, all was right with the universe. Stay tuned for the final part, and all the chaos that came with it. May your adventures be many and your inspiration be endless!