Northeastern US Road Trip Part 1 of 6 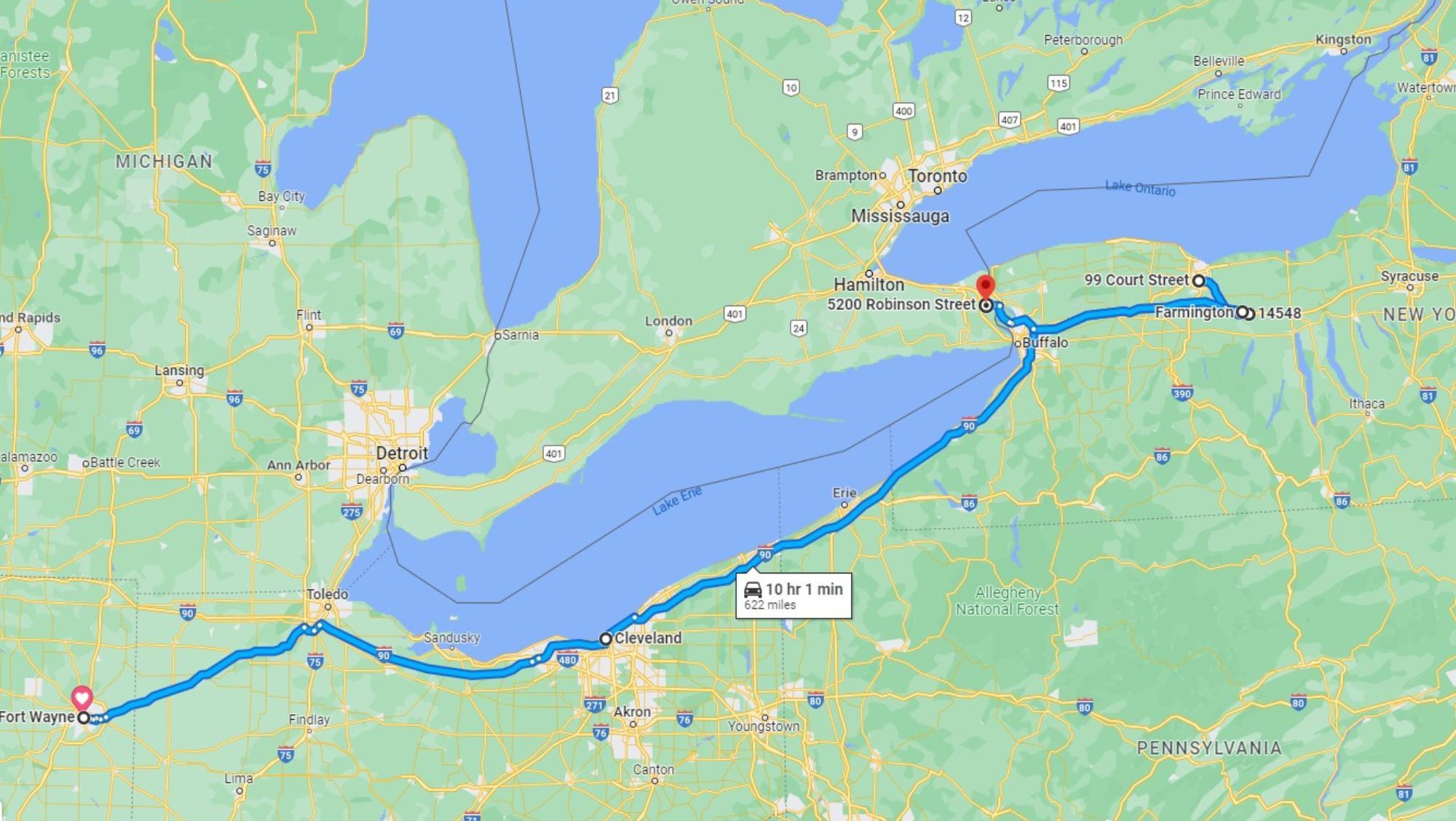 Happy Friday! And it's the Friday before Halloween, sweet!

Last time I talked a bit about the Northeast US road trip my husband, Nicholas, and I took. He's the owner of NJ Productions and he has his own blog, which is important to know because he's going to be sharing photos of food, people, nature, locations, and more from the trip in upcoming blogs. If I'm feeling particularly rambunctious, I may update below with links. It was a three week trip, spanning 22 days from September 28th to October 19th. We traveled through, and stopped in Indiana (I’m counting it!), Ohio, Pennsylvania, New York, Vermont, New Hampshire, Maine, Massachusetts, Rhode Island, Connecticut, and New Jersey. We also crossed over into Canada for a day.

About halfway to our first stop in Farmington, New York region, we stopped in Cleveland, Ohio. We both have regrets about that. I had hoped to find some fun shopping spots so we could stop and stretch our legs. A local saw us and kindly told us, “You won’t find any good shopping spots here. There’s nothing good in the city.” Or she said something like that. She wasn’t wrong. She pointed us in the direction of a nearby mall, and it was … OK? I mean, we tried some bubble tea at Poke 86, and it was … kinda almost thrown away. And I LOVE bubble tea.

From bad to worse

Lunch wasn’t much better. It was a strike out for TikTok and for Melt Bar and Grilled. Nick had seen a super awesome burger or something on TikTok at this restaurant just outside of Cleveland, OH. So, we went. The menu was very large. We were there a little past noon, and there were NO other customers there the entire time we were there. There were, however, several deliveries. None of this inspired confidence, so all I ordered was some chocolate milk. They gave me regular milk in a glass with a clump of Hershey's chocolate syrup on the bottom. I had to use my knife to stir it. While the nostalgia was fun for a bit, I didn’t want that type of ‘chocolate’ milk. Boooooooo. But the burger and fries. Yikes! Cold fries, as cold as the service, and a cold burger (just on the edges). Nick said the garlic aioli lacked any garlic (so just mayo), the caramelized onions that couldn’t even pass as sauteed onions (think white onion, not transparent at all, warmed, and with a slight crunch), and then a pepper jack cheese that lacked any punch. Bland. Cold. No service, and we could see the server across the room chatting up his bartender buddies. Yikes!!

Then the tides of food did shift

As dismal as that day had been, it seriously only got better from there. Complete shift when we reached Rochester, New York! We traveled there a few times to enjoy the food. First of all, they had the BEST BBQ I have ever had, and that was despite them running out of nearly all the BBQ options! We arrived late at night, near closing time, so neither of us was surprised. They make everything for the day and smoke it fresh, so when it runs out, it’s out until the next day. That means, it is stupidly good. This was at Dinosaur Bar-B-Que in Rochester. I would go on a trip just to go back there. The other restaurant we decided to check out was SEA Restaurant. The egg rolls were some of the best I’ve had, and the fried rice there helped make up for an interesting batch of it that we’d had some time before that (some time before the trip). 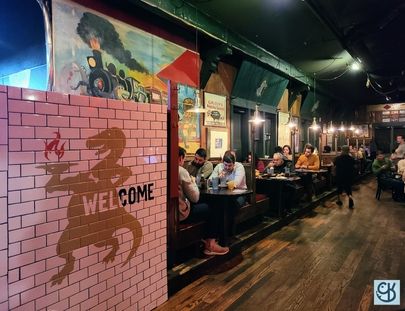 Back near our hotel, I remember Diablo Loco in Farmington, NY. I overate by like, a LOT.

Ok, this needs its own paragraph. We show up and there’s an hour wait for a table at Diablo Loco. The server was so friendly and funny. When we ordered a non-alcoholic lime margarita, he was beyond baffled and kept asking us if we were messing with him. Apparently, someone else had the same request earlier that evening, and NO ONE ever made the request before. We ordered a pitcher - we were hungry and thirsty, and it seemed like a good idea at the time. I have only slight regrets. Our server actually watched us drink it to see if we were still trying to pull a fast one on him! It was too funny! When I realized no one would be drinking from the pitcher, I even offered for him to try it, and he seemed completely shocked by the idea. I mean, dude! How could he have NOT tried it?! Well, needless to say, he was delighted by the flavor and admitted it might be better than the alcoholic version. DUH! It’s just a bunch of sugar! Which he coated our glasses with, btw. The fajitas I had were amazing, and I definitely overate, but it was an amazing experience all around. 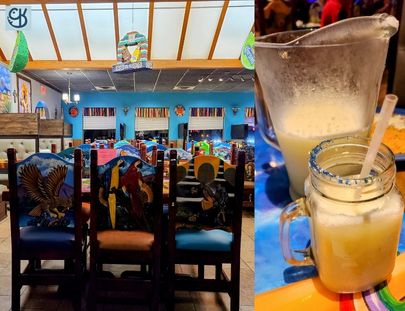 Moving out of the US and into Canada…

Alright, besides the food on the American side, we also had the chance to try some food on the Canadian side when we visited Niagara Falls. The falls were alright. It was a lot of water, and it was fun walking through the mist that reached us on the top of the cliff (it was like walking through a cloud, and although it wasn’t raining, it also was like it was raining). The falls were more enjoyable from a distance and up in a restaurant … which rotates a full 360 degrees over the course of an hour! The restaurant in Skylon Tower was expensive to eat at and the food wasn’t nearly as good as I thought it would be, but I very much enjoyed the experience and the view. 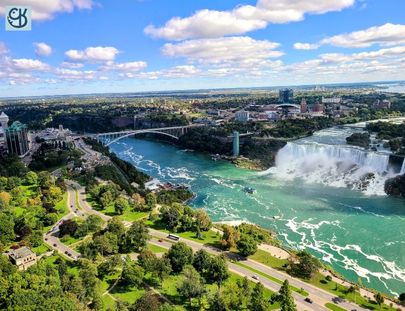 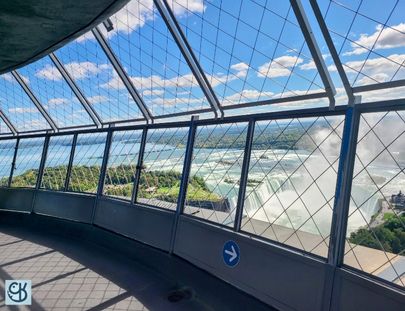 As luck would have it, shortly after crossing the Rainbow Bridge and entering Canada, I needed a bathroom break. Yay, me. I’m glad I did, too, because we found a super fun place to explore at the Bird Kingdom. They boast the biggest free-flying aviary in the world. It was as cool as it sounds. 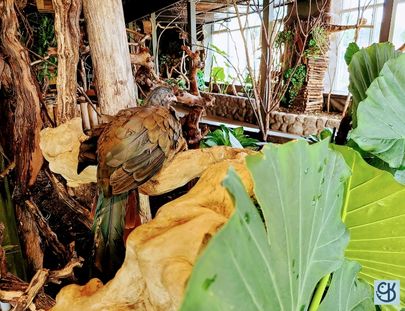 It was on our way back to our hotel after our day trip into Canada that I made an incredible discovery! A Speedway gas station had inflatable koozies, a collection of six, which included a unicorn. As someone who loves pools and taking baths, this was more than just a want. In my haste to snatch one up, I failed to notice that there was a way to discern which of the six collectables I would be getting. I only hoped the one I chose, which had a rainbow pattern, would be the unicorn. It was not. And thus began my hunt for the elusive unicorn koozie… 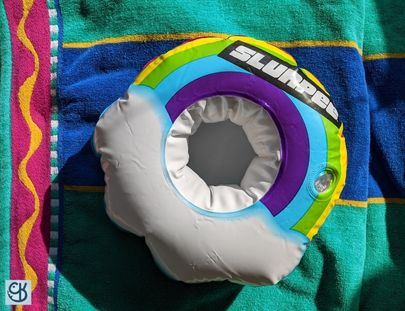 No more food … for now

All in all, those first few days were full of adventure. I didn’t think I would write nearly this much, but ta-da! I did. Lol

Next week’s post will likely have just as long of a list of shenanigans. Until then, may your adventures be many and your inspiration be endless!