Distracted Reading The Guardians of Ga’Hoole 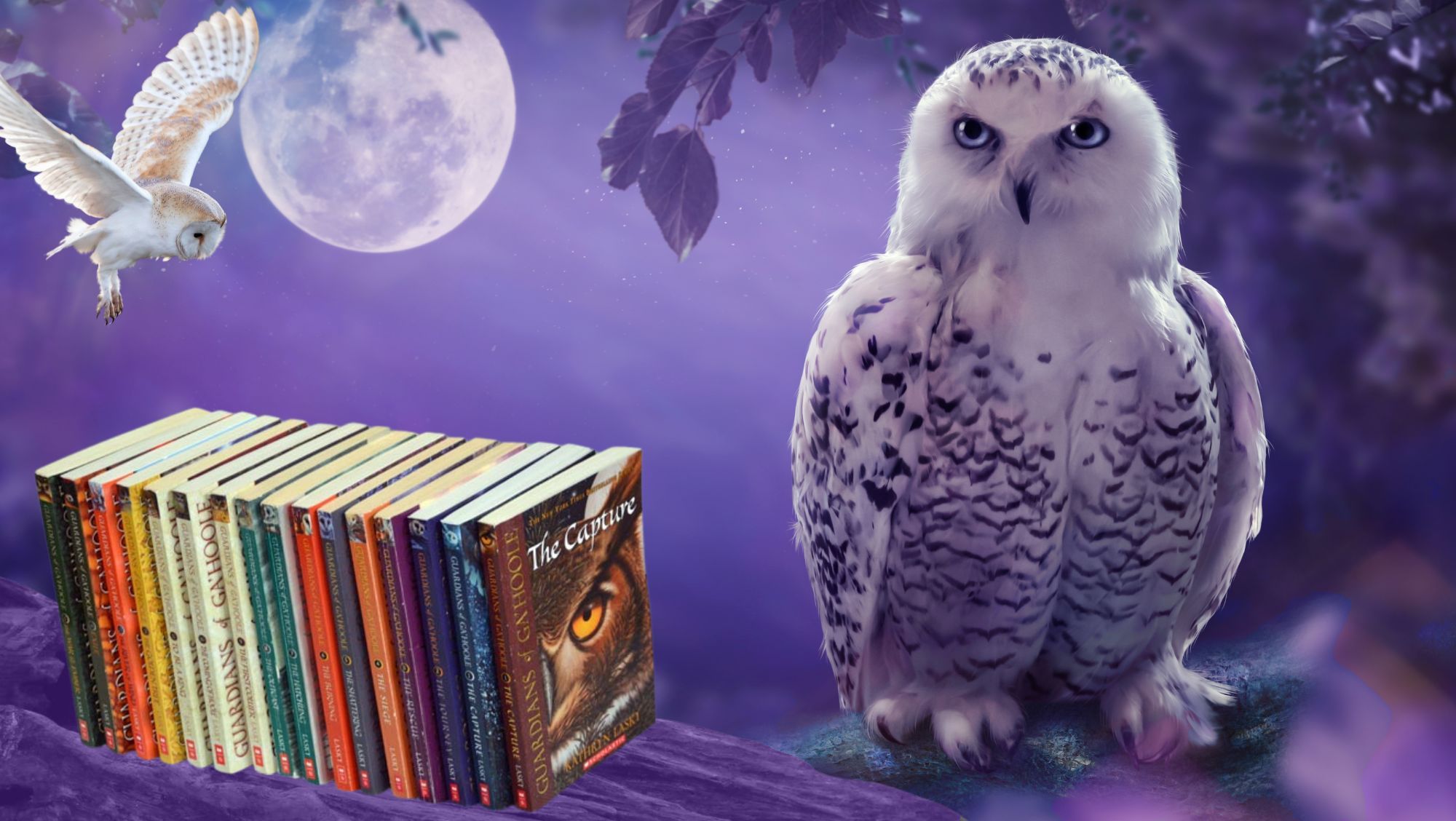 Happy Friday, everyone! I’m currently in a bit of a lull between works. Sure, I could be writing, but I’ve been pretty distracted by the Guardians of Ga’Hoole series. I first fell in love with the movie, and when I heard there were over ten books, I decided I had to know how the story ended.

The Legend of the Guardians: The Owls of Ga’Hoole movie and a bit of a description for it

So, the movie covers concepts from the first three books written by Kathryn Lasky (book series photo from her site). The story the movie portrays is both vastly different from the books and yet also very true to them. By that, I mean that it keeps the spirit of the story, even if it doesn’t follow the plot lines. Sore, a young Barn Owl, is still the main character. In the movie he goes from being a prisoner to freeing himself, along with his Elf Owl friend, Gylfie. They make it to the legendary Ga’Hoole tree after meeting up with Digger, a Burrowing Owl, Twilight, a Great Gray Owl, and Miss P, or Miss Plithiver. Then there’s a battle, and a happy ending with a frustrating, to me anyway, reminder that the battle isn’t fully over. One of those, ‘we never did find the body’ type endings, though this one was blunter than most.

Anyway, the movie was fantastic! I loved the characters, the world, and hearing those stories of the legendary Guardians of Ga’Hoole that Soren always talked about. So, when a friend told me there were books and I could finally find out what happened with that ‘we never did find the body’ ending, I jumped on it!

How the series differs from the movie

There are WAY too many ways the books differ from the movie. First of all, there is no echidna. However, there is the “Band”. That much was true. The small group of owls does in fact become known as the “Band” and later as the “Chaw of Chaws.” Prophesies do exist in the series, but the movie makes for a much lighter telling of it all and more of whimsical telling than the way the books describe it.

Oh, and the books … they’re SO MUCH DARKER! The movie has some dark elements to it (imprisonment, war, battles, etc), but the books take it to a WAY darker level. There’s some torture, cannibalism, etc. I won’t go too into details, as I don’t want to ruin things too much in this section. There were a few moments where I struggled a bit and nearly put the series away, but I persisted. Now I’m on the final two books, and I’m still in love with it.

SPOILERS (For NO spoilers, see END OF SPOILERS section below)

Book One: The Capture

This is the story of how Soren came to be captured. The movie has it that he and Gylfie are captured by the Pure Ones, but they actually don’t show up until book two or three (I think 3). It’s a dark tale of torture, brainwashing, egg snatching (like kidnapping), and is a bit difficult to get through. Had I not watched the movie and known they escaped, I might’ve put the book down.

This is when Soren and Gylfie meet Twilight and then Digger. Unlike in the movie, they actually don’t find them at the same location, and the two don’t know each other. Then, of course, they also run into Miss Plithiver, Soren’s nest maid snake. The rest of the book covers how they find their way to the Ga’Hoole tree and the guardians. This journey is so much more in depth and different than the simple flight they took in the movie. It makes sense though. The movie couldn’t have covered everything.

This is about the danger of the “flecks” and how the Pure Ones and the owls at St. Aggies are after them and for totally different reasons. Ezylrib is the one needing rescued in this story. The movie has an interesting rescue, but it has totally different vibes.

Let me see if I can explain. The book has two different owl groups causing trouble. Both groups, St. Aggies owls and the Pure Ones, steal eggs and chicks. The Pure Ones are only interested in Tyto Owls (pure owls, better owls, elitism stuff). St. Aggies wants owls to work as slaves and to be servants so the higher ups can feel powerful. The Pure Ones use flecks to incapacitate other owls and trap them. St. Aggies is full of dumb dumbs who don’t know what to do with the flecks, but they collect them because they want power, and it seemed like a powerful thing to have.

In the movie, the above is mostly all accurate, only, the Pure Ones ARE St. Aggies. So, the steal chicks and eggs. Non-Pure Ones are used as slaves, and flecks are gathered to incapacitate other owls. A simplified story-line.

In the book, Ezylrib goes looking for answers and is caught in a ‘Devils Triangle’ – which is a fancy term for he’s caught between three magnetic points caused by a triangulation of flecks. The Pure Ones want knowledge he has, so they keep him alive and intend to brainwash him (they use a different technique than the St. Aggies owls, but it’s effective). The rescue, therefore, is of Ezylrib. The Chaw of Chaws destroys the Devil’s Triangle, and yay! Happy ending.

In the movie, the guardians go to rescue captured eggs and owlets from the Pure Ones at a location very similar to St. Aggies (remember, the two are basically one entity in the movie). Ezylrib and other guardians of the tree are captured and ensnared by a Devil’s Triangle, and Soren and the band rescue them (no Chaw of Chaws in the movie). The last difference is that the guardians were going to be murdered here. But the book is clear they want Ezylrib alive to garner knowledge from him. So, again, a simplified story-line.

The rest of the books cover what happens after all of that, including what fate befalls Kludd and Nyra, the ‘leaders’ of the Pure Ones. In the movie, Kludd is a victim, same as Soren. In the books … not so much. About half-way through the series, Nyroc (Coryn) becomes the main protagonist instead of Soren. From there, things get lighter at times and darker at others. Not to mention, it becomes a whole lot more interesting.

All in all, I’m really enjoying the series. I’m nearly done with book fourteen, and there’s a wait for me to read book fifteen. Someone has had it checked out for the past two weeks. I thought that would be fine, except that I devoured the series and now I’ll have to wait on finding out what fate befalls the Guardians of Ga’Hoole.

If you like owls as much as I do, or if you fell in love with the movie, this series may be for you. Once I’m done reading it, I have two more books on my reading pile, but then it’s back to editing and writing. October 6th is my beta reading deadline for Sir Ryac and the Dark Mage. If you’d like to know more on that timeline, check out my previous blog here, which covers the current plan. Until next time! May your adventures be many and your inspiration be endless!