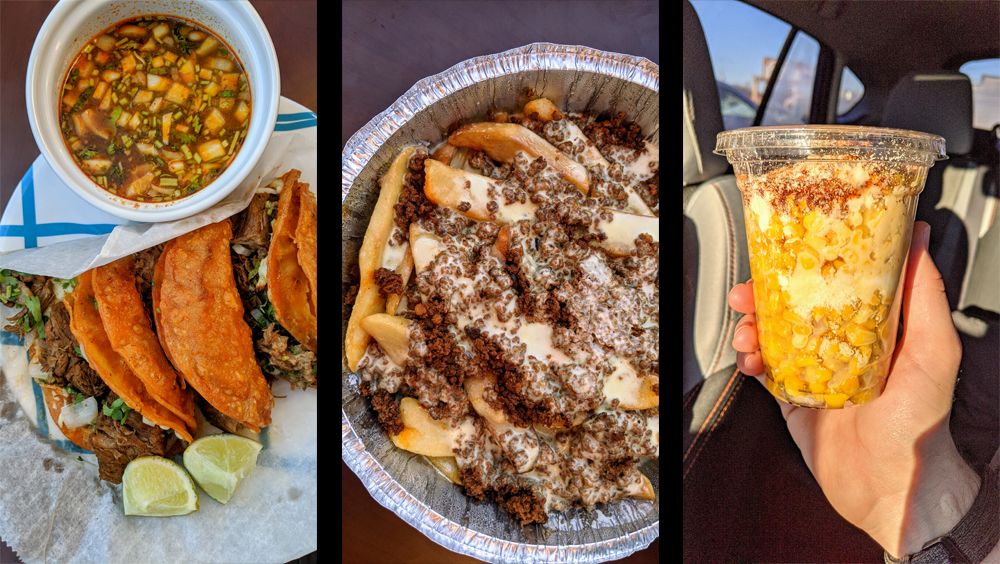 Last week I mentioned that I was working through my New Year’s Resolutions. Well, I am happy to say that I continued doing that this week as well. Life might be crazy right now on a personal level, but honestly, it’s felt pretty hectic since about this time in 2020. At least this year I’m focused on achieving some tasty goals! Speaking of goals, I successfully began chipping away at goal number four:

Eat food from 3 restaurants I haven’t tried before (delivery counts! So does curbside pickup! And 3 is the minimum. Don’t you want more than the minimum pieces of flair?)

That’s right! I ate new food from a new restaurant. To be clear, the restaurant didn’t have to be new, I just had to be new to eating their food. In any case, El Taquero is the name of the restaurant I ordered from. I believe they opened up in January of this year.

My husband had been pestering about some new taco craze – birria tacos. They’re tacos that have been coated in cheese or something? And then fried. I don’t know. They were a bit odd to look at and you could dip them in a soup type thing. I was skeptical, but I will say, they were SO good! And they were stuffed with plenty of meat! The tacos were decent by themselves, but dipping them in that saucy soup made them so much more AMAZING! I tried dipping my burrito, but it didn’t go so well, both in holding up after the dunking or in the flavors. It has to be the tacos that get dipped.

The salsas were pretty great, too. I tried their elotes, as I have enjoyed elotes ever since trying them in Arizona a few years ago, but I wasn’t a huge fan of theirs, at least not at first. I prefer elotes that have a kick to them, and the ones at El Taquero were sweet. Now, I will say, the elotes were some of the best I’ve had, once I added some of their green salsa to the mix. That really spiced them up!

I also split the chorizo fries with my husband (we went all out in trying several menu items), but I kept the burrito to myself. Those were good, and I would get them again, but the fun part was trying the birria tacos. Oh, and the horchata! If you haven’t had horchata and want a proper introduction to the creamy beverage, you’ll want to try it from El Taquero!

Well, that’s one restaurant I’ve tried for 2021. We’ll see how the next two or more go. I’ll be sure to let you know where I visit next! Oh, and I’ll be sure to give updates on other goals I’ve accomplished. I’m hoping to work on one a week. It may be a bit much, but hey, they don’t get done by ignoring them!