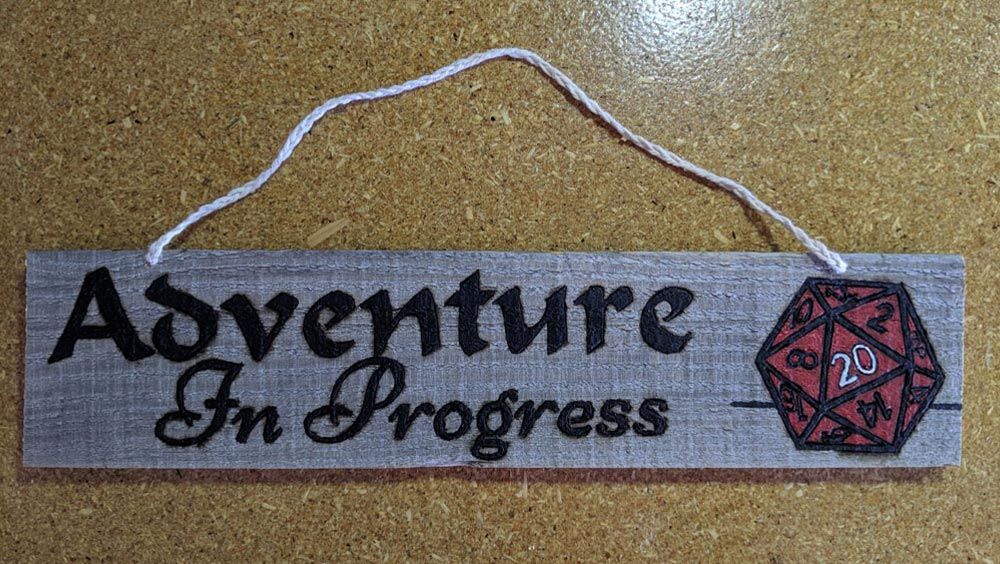 It’s been another week full of distractions and full of small victories. If you haven’t guessed it yet, this is an update post on where I’m at with crafting and writing. No worries though. I’ll skip past the distractions, as I’m sure they would likely bore you. Then again, someone might be excited by the tales involved in randomly shopping for D&D miniatures, photographing mattresses, or organizing two events, one for a local fair and the other for a trip to the Indiana Comic Convention. Either way, we’re skipping all of that and jumping right into what I’ve been up to this past week!

As you may have guessed from the photo, I’ve jumped right back into crafting signs. I’m still crafting books too and have one on the way for Supernatural. Sadly, I have not watched the show, but I do know from friends that I should carry salt around or something like that. Either I have great friends, which I do, or they are totally messing with me, which they do.

Aside from Supernatural, I have two more signs I’m working on that involve Hogwarts and another that makes reference to gamers and D&D players. You’ll just have to keep an eye on Twitter or Facebook to see what I mean by that! I may even put up a few photos on Instagram. Who knows? I’m feeling particularly energetic now that I’ve recovered more from a recent surgery. I must admit, I took having energy for granted, but I’m making up for it now.

Crafting may be going great, but writing has been a bit more problematic. Still, I only have twenty chapters to go in editing my first novel, MAD Upload. In case you were wondering what it’s about, I’ll try to explain it quickly. It’s about a detective who chases down clues that led to a teenage boy’s death. Meanwhile, the corporation responsible works to cover up the death and hide the fact that they have technology that uploads people into their video game. While that goes on, a teenage girl plays the same game and also gets uploaded into the game.

The book was a lot of fun to write, not so much to edit. Still, I’m making progress! I’m hoping to edit more of it today. Besides that, I’ve also been working on a few new blogs. Next week will feature a story by @shortSorcerer called Misadventure in Sorcery. Then there’s a story about a ninja, and after that, I may write a blog about what it takes to form a writing group.

Thanks for listening! And if you’re a fellow writer with a question, feel free to leave me one in the comments below. Stay energetic out there!