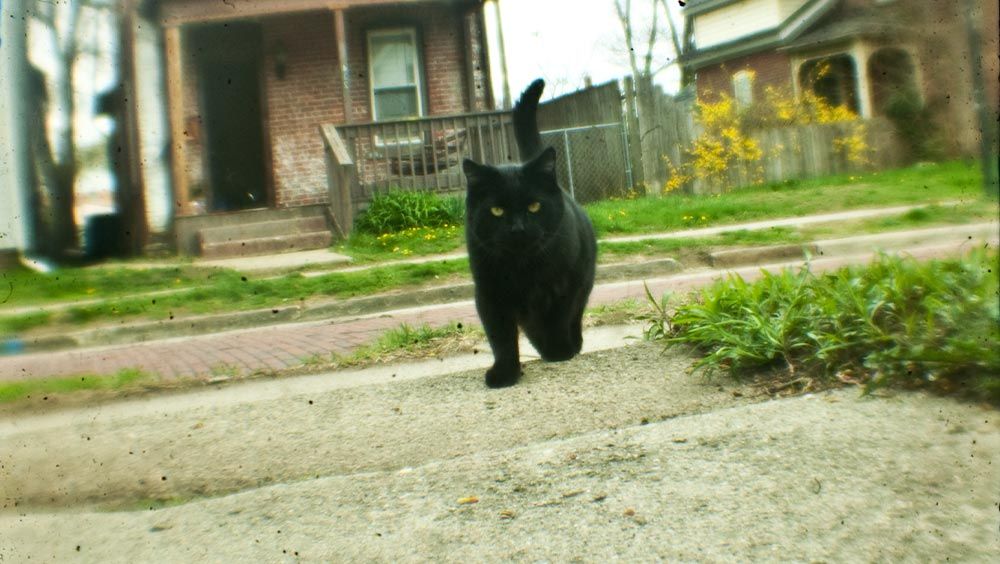 This story goes out to our awesome neighborhood board member, Ed Kelker, who has been donating his time and painting everyone's mailboxes in the neighborhood! He’s been doing an awesome job! And he deserves some recognition, even if it is in the form of a strange Halloween story :D Also, this story is NOT based on real events, though it would be eerie if it were a prediction of sorts…

The days were becoming colder, but then, his fur was becoming thicker. He marveled at how it retained it's softness as he rubbed himself against a familiar man's leg.

"Come out to join me again, have you now?" the man said as he bent over to pet the cat. "Can't say I'll be doing this much longer," he said with an upward look at the sky. "The company's nice though." He gave the feline an ear rub before returning to his work.

It wasn't long before a new visitor appeared.

"Hello! What are you doing to our mailbox?" A you girl called out cheerfully.

"Because it's old and the paints begun to wear away. See how bright red that post is compared to this one?" He pointed first at the post he had already finished and then at the one he had begun to work on.

"The cat? Ah, well he's a fine fellow. Been joining meevery dayas I've been going around to the different mailboxes."

"What's a fine fellow?" The girl seemed to ask the question more out of habit than out of any real curiosity. She was far more focused on winning the cat over to her side.

"Well the cat is of course!"

"Oh... well, hello my fine fellow!" the girl called out in greeting. The cat purred and relented at last to the girl's advances. He stretched and walked over, and much to her delight, he began rubbing himself against her legs.

"Do you think he'll join me for Trick-or-Treating tonight?" she asked as she stroked the cat's soft fur.

The cat purred louder as he recognized he was the center of attention, as he should be.

"The day doesn't go anywhere," the girl corrected him as she continued to pet the cat. "The sun does, though."

"Uh-oh, gotta go!" The girl stood, scratched the cat under the chin one more time and then ran inside.

Dazed by the delight of the chin scratch, the black cat merely watched as the girl ran off. As much as the cat had grown fond of the man,hehad never scratched his chin before.

"Careful friend," the man warned as he continued to paint the mailbox post. "Children can be mischievous atthe best of times, but tonight there's sugar and fun to be had."

The cat sat and tilted his head at the man, listening to his every word.

"Hmph, perhaps a bit of magic too," the man grumbled.

Time passed quickly, and before long, the new coats of paint were drying on the mailbox posts.

"Just need to tidy up a bit," he said conversationally as he stroked the cat's fur. He was careful not to rub any paint off on his feline friend. He gave a final ear rub as he took his brush over to his truck where he had a clean bucket of water waiting for it.

The cat stayed behind, preferring to do a quick washing of himself to doing any walking. He knew the man would be back to collect his paint and other supplies and to give him a farewell ear rub.So used to the routine, the cat hardly paid attention to anything else. Oh, he noticed the rude level of noise three boys were producing as they ran down the sidewalk, but he ignored them. At least, he tried to ignore them.

The shouts aggravated him, and his ears went flat. It was no good. The children continued to shout and yell as they drew closer on their bike, scooter, and skateboard. The black cat hissed at the first boy as he passed by on his bike. He was about to strike at the second, but the boy’s foot came down on his tail instead.

Yowling in pain, the cat retreated behind the mailbox, but as he did so, he tripped over the can of red paint. The lid, which had only been lightly set into place, flipped off. Red paint flew out of the can and covered the enraged cat.

Humiliated, and with a sore tail, the black cat ran off into the nearest bushes he could find. He ran and he ran, certain he was being mocked, or worse, pursued. His humiliation and his anger only intensified as he heard the boys’ laughter. He may have been a cat, but he understood the sound!

The sun began to lower, and the cat stopped his running. He had left the children far behind, but his coat! His beautiful coat was ruined! The paint had begun to dry in spots, matting his fur and making movement difficult. He thought about cleaning it off, but as he smelled the fowl liquid, he had second thoughts.

He would have to swim in the cold pond water if he wanted to be free of the stuff. Yet the pond happened to be back in the direction he had come. He tried to sit and think, but his legs were too stiff from the paint.

Hissing at his mangled fur, he started reluctantly back in the direction he had come. His mood was foul as he slunk from bush to bush. Children were coming out of their houses now, dressed in strange garb and carrying large sacks.

The noise and the sight had the cat on edge. He would have abandoned the whole notion of continuing, but the paint had begun to dry under his tail. The discomfort wore on his nerves and despite the growing number of children, the cat continued to slink through the neighborhood.

Then he found them! The three children who had ruined his fur!! A growl grew deep in his throat. Tufts of hair unsoiled by the paint stood on end. He bared his fangs and dashed out at the nearest child.

It mattered not that his fangs failed to pierce the strange cloth the child wore. The cat never relented. His claws, far sharper and slimmer, had little difficulty in slipping through the fabric. He bit and he clawed, all the while growling and hissing. His tail, still wet with red paint, twitched about, sending droplets of the red liquid flying about.

Gone was the laughter from before, that mocking laughter. Now, only screams of pain and terror filled the air. That, and the terrible growls from the enraged paint covered cat.

Somehow, the boy broke free of the cat’s attack long enough to escape. His companions, the cat noticed in righteous fury, had already left. He would have very much liked to have bitten and clawed them as well.

“My fine fellow?” a small voice asked piteously from the ground nearby.

The cat, no longer quite as enraged as before, looked over to see the girl he had met earlier. He watched as she sniffed and wiped her nose.

“Meow,” he said in innocent greeting.

“It is you!” the girl cried in relief. “What happened to you?”

The cat growled as he sensed the girl was taking about his once beautiful coat. When she sniffed again, the cat relented and ceased his growling. Then he did as his mother had trained him to do in such situations and he broke eye contact as he innocently looked around.

“Thank you, my fine fellow,” the girl said, standing up. She collected her bag and began picking up small pebble sized things from the ground.

The cat stayed and watched, not because he cared, but because the behavior confused him so. He became far more confused as the girl cried out excitedly and picked up three other bags from the ground.

“Well that’s what they get for trying to steal my candy!” The girl turned to look at the cat. “You know, I bet they were mean enough to do that, too,” she said softly as she once again took notice of the cat’s fur.

Sensing sympathy rather than mockery, the cat gave another soft cry.

“C’mon, let’s get you a bath.” The girl beckoned for the cat to follow, and against his better judgement, he did.

Together, the small witch and her black (though mostly red) cat made their way back to her house, and not a single soul dared to disturb them.