Tales of a Ferret Owner: A Tango Short 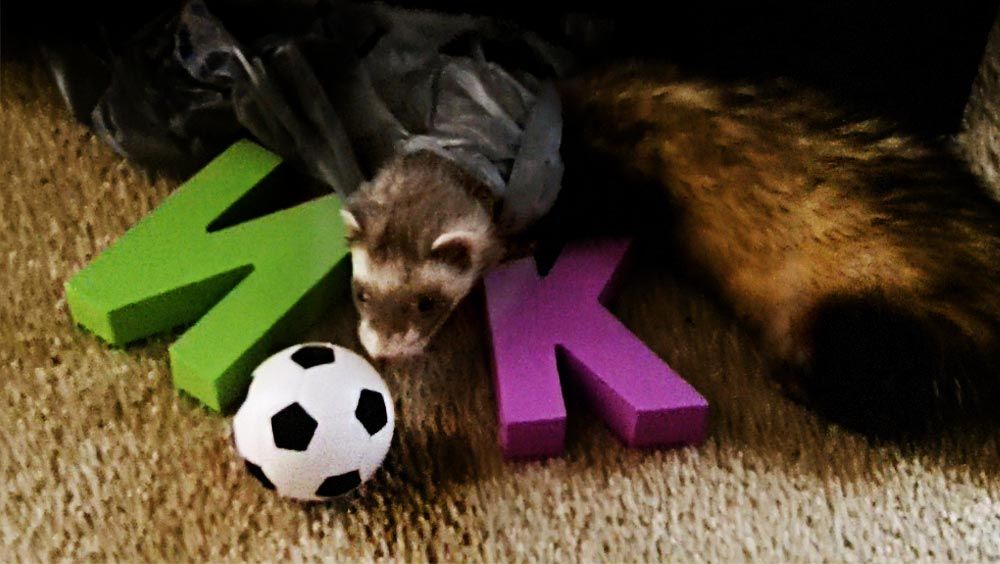 It’s been a while since I shared a story about my ferrets. This one is about Tango. The photo is of him with one of his coveted toys. I hope you enjoy this Tango short!

As promised, I shall be talking about Tango. In particular, I just wanted to share one of the cutest things about this cutie pie. Besides being the color of a red fox, Tango also had this endearing habit of carrying certain items around. Like I’ve said before, Tango, Erin, and Teeka all had items they preferred. None of them had the same item they hoarded.

Well, in Tango’s case, he found something (or somethings) he couldn’t ignore when he ambled into my closet – stress balls that had a soccer ball print (they were from some Evans Toyota event). He seriously could not resist carrying these things around! He plucked one right out of my closet, which I’ll freely admit that I did not remember owning the toy. Then he carried it off and hid it under our bed. I think we had like six of those things, thanks to Nick having worked at Evans Toyota in Fort Wayne.

Anyway, after grabbing the first one, Tango returned to snatch up the rest! How cute is that?! He would carry each and every one of them to the spot under our bed just under the backboard. Oh, and if he caught you taking his soccer balls, he gave you the dirtiest look. Of course, his cute, ferret face couldn’t quite look all that menacing. That said, Erin somehow managed to pull those looks off.

I digress. Yes, I would steal Tango’s soccer balls, and do you know what I did with them? I hid them in different spots throughout the house, of course! Then, in an angry huffy sort of way, he’d amble around and collect his treasure. After a while, he caught on to my pattern of bait (with treats) and snatch (where I’d run over and steal his soccer balls while he was nomming on his treat). This made him adorably grumpy, and he started carrying his treasure to new hoard locations.

One of the new spots was behind the couch, as they were too big to fully fit under it, despite his many attempts to do just that. The other location he enjoyed stashing them was in Teeka’s sleep spot in the closet with the snow pants. I don’t know that Tango ever got them in the snow pants, and I doubt they’d have stayed there for very long if he did. After all, Teeka was protective of her snow pants’ sleep spot.

And there it is! A Tango short!

Photo is of Tango with his favorite toy to maul, the sheepdog from the movie Babe.