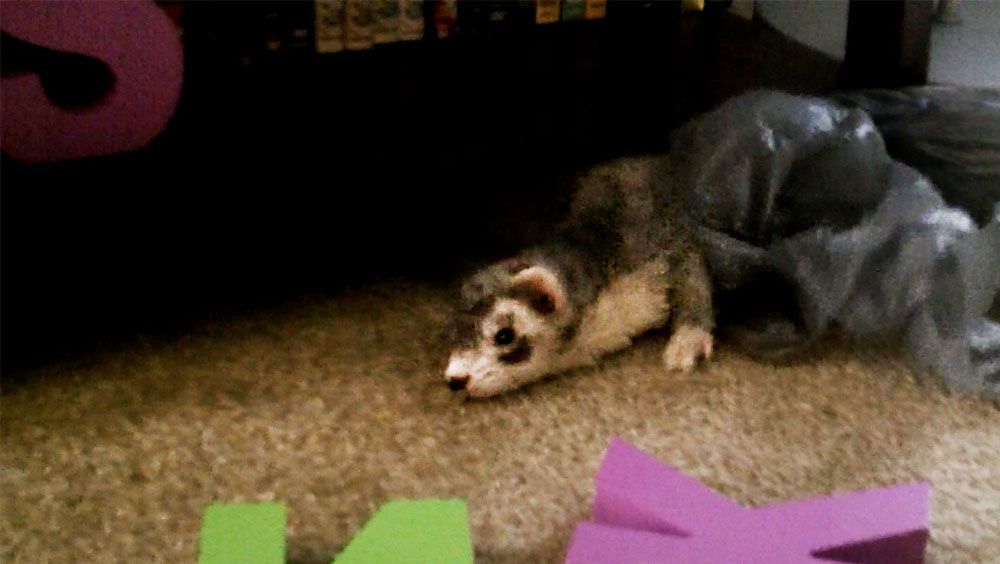 Week three of working on my resolutions is going well. I had hoped to accomplish more than one new Ryac and the Dark Mage chapter, but I’d prefer that than not accomplishing anything at all. I also completed a handcrafted book I’ve been working on revamping (see photos below), so there is that. Who knows what next week will have in store for me as I continue to press forward with my goals.

For now, though, here’s another quick look into the life of a ferret owner.

I know I ramble a lot about Erin, but in reality, she wasn’t the only rambunctious one of the group. Teeka had her own energy and drive. It just so happens that getting away from Erin happened to be her biggest motivator. Hence the why on how I lost her.

Now, before you judge me, I just want to point out that ferrets have the ability to fit through holes or spaces as small as an inch tall or wide. I want you to think about how many spaces you have in your home that a ferret could wander off to. Now imagine not knowing about all of them but thinking you did. Yeah, that’s where we were at. We thought we knew them all!

I will say this, we were lucky to be in a newer house with few issues of unusual hidey-holes. Older houses would be a nightmare with ferrets, particularly the ones with floor heating vents. Can we say disappearing act? Sadly, yes. If the ferret fits, it does so. The curious fools.

Anyway, my husband and I really did think we knew of all the places the ferrets could go. We’d had them for several weeks and hadn’t had any further issues. They continued to surprise us. It was like a game they secretly played. Step one: lure humans into false sense of security. Step two: disappear. Sometimes, just for giggles, they’d add a step three – reappear without giving away secret location of the disappearing spot.

In this particular case, I did eventually bust Teeka’s hideout. Unfortunately for her, I was, uh, rather rough about it.

Let me explain. Teeka vanished. Erin was a monster to everyone – she really didn’t like it when she didn’t know where Teeka was. Tango didn’t really care, he kinda just did his own thing, which was really cute. I’ll have to share a Tango story next time. Anyway, I did the usual thing and searched all her favorite spots.

Thanks to Erin being an absolute monster about the bedroom door being closed and the door cover being some nemesis she equally couldn’t ignore, the bedroom was open to all! That meant searching bed sheets, checking the closet (in case I closed another ferret in there. Sorry Tango!), and searching the bathroom for any unexpected disappearing spaces.

Remember, ferrets can’t get somewhere high unless there’s a place to dig their claws into and climb up. They aren’t like cats. This helped with limiting the places to search…sort of. I also had to check under dressers and bookshelves. When I couldn’t find Teeka there, I had little choice but to close the bedroom door – this was to prevent that Step three of theirs from happening. And, of course, the second the door closed, Erin freaked and began attacking it. The only good news was that I knew where Erin was at all times.

Tango was easy enough to spot or hear. We had plastic bags around that the ferrets could roll around in or tunnel through. They were particularly fond of them whenever I stuffed them under taller furniture, like the DVD shelf. While the rustling of a plastic bag isn’t as loud as Erin’s siege of the bedroom, it was enough to let me know where Tango was.

From there, I checked the blanket piles, the bags, the offices, the cabinets (in case they’d manage to pry their faces and claws inside enough to open them and crawl in) and everywhere else I could think of.

At some point, I must have gotten the idea to start checking different closets. I don’t remember if I’d opened any of them that day or not, but it never hurt to check more places. Well, one of the closets, while not particularly messy, it did have some nice hiding spots on the ground level. This included a garage tarp, neatly folded, which made it perfect for tunneling through; a long coat that nearly touched the floor, which made it a great thing to claw at and potentially climb; a ladder to hide under, a stool, and then there were my snow pants. Maybe they should be called a snow jumper? It had overall type straps to keep them up, so they dangled all the way to the ground.

Now, I want to be perfectly clear here, I didn’t know Teeka was in the snow pants. I was simply searching the area, and by this point, I’d become quite concerned as I hadn’t found her yet. On top of that, I didn’t think the tiny gap under a closed door, even one with tile under it rather than carpeting, would be enough for a ferret to shimmy under. I was wrong, of course, but again, Teeka had never done this before and I was in a panic.

Yeah, I did it. I grabbed the snow pants and I pulled them up off the ground. Again, I was just trying to get a better view of what lay underneath. I needed to see, and the bulky item was blocking my view!

So, uh, yeah. Out popped Teeka. It took a few seconds, which was long enough for me to basically go, “Huh? Why are my snow pants so heavy?” or perhaps “That’s odd.” Then Teeka fell out, still in a cute little ball form, she was really out of it, and I mean really out of it. Ferrets, at least Teeka anyway, are really heavy sleepers. She did eventually wake up, but not before I put the snow pants back down and closed the door.

What? Don’t judge me! She was fine! As soon as the door was closed, I heard her rustling around and getting comfy again. Oh, and I also heard or didn’t hear something else. Despite my speed, Erin had forsaken her siege and decided to inspect my inspecting. Yeah, she found Teeka’s secluded hiding spot. She also spent the next minute and a half sniffing under the closet door, waddling the length of the door, scratching underneath it, and listening as though to catch a hint of Teeka’s movements.

Sadly, Teeka had company shortly after that. Erin persisted in her scoping out the new territory, and despite the tiny gap, she managed to squeeze her girth under the door. Now, I will say this, sometimes I caught Erin curled up in the same pant leg as Teeka and other times, she took a pant leg for herself. Also, when I checked on them at later dates, I discovered the serious warmth of those snow pants. Besides the obvious circular bulge at the base of the snow pants, there was also a lot of warmth. Such smart little ferrets, finding an insulated sleeping spot!

Well, that’s the story of Teeka and the snow pant leg! It’s also the story of her short-lived escape from Erin. To be fair, I think Erin would have found her eventually. She just became distracted by doors too much.

Cover Photo is of Teeka under a regular shelf playing in a plastic bag.

Photos below are of recent handcrafted book revamp. 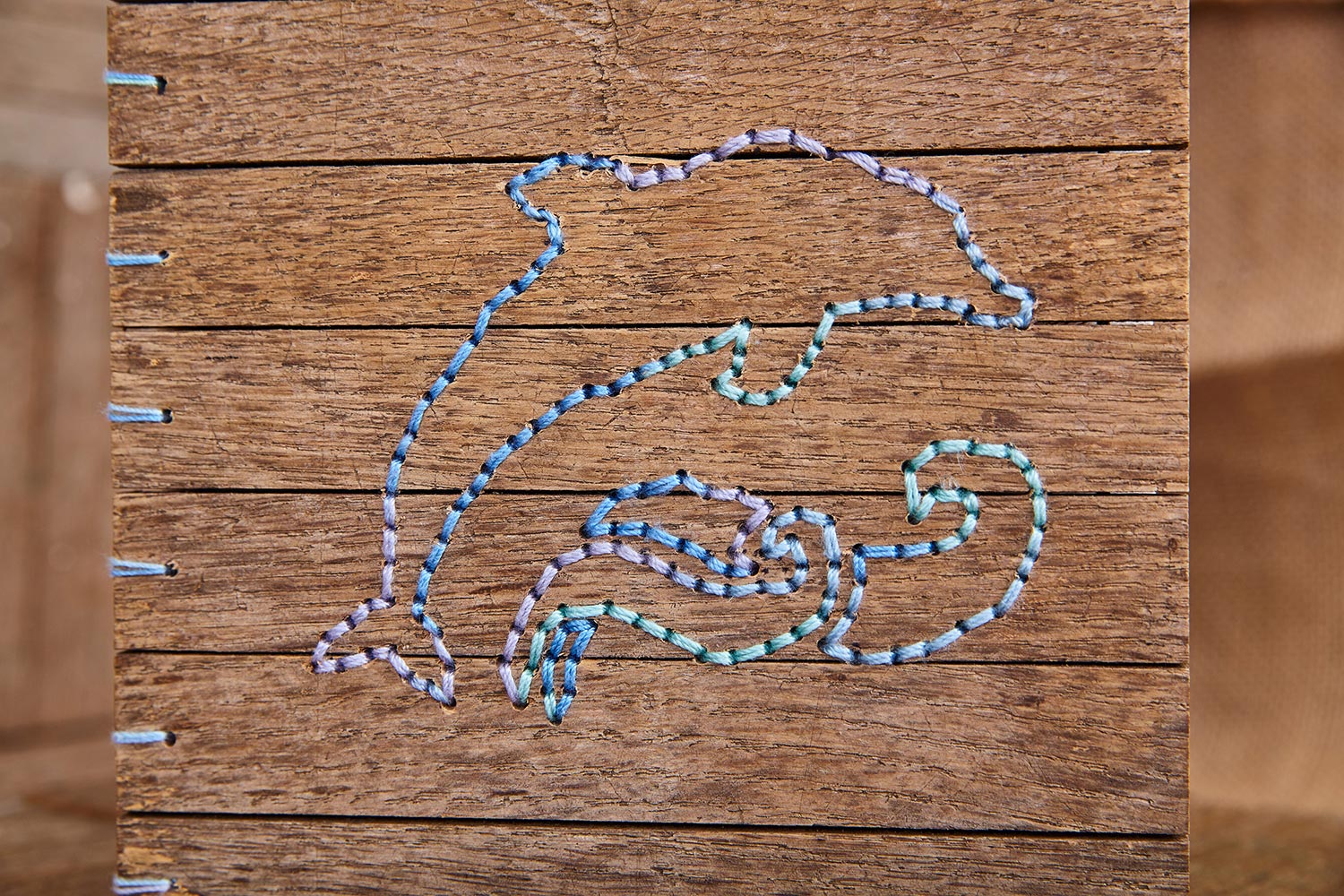 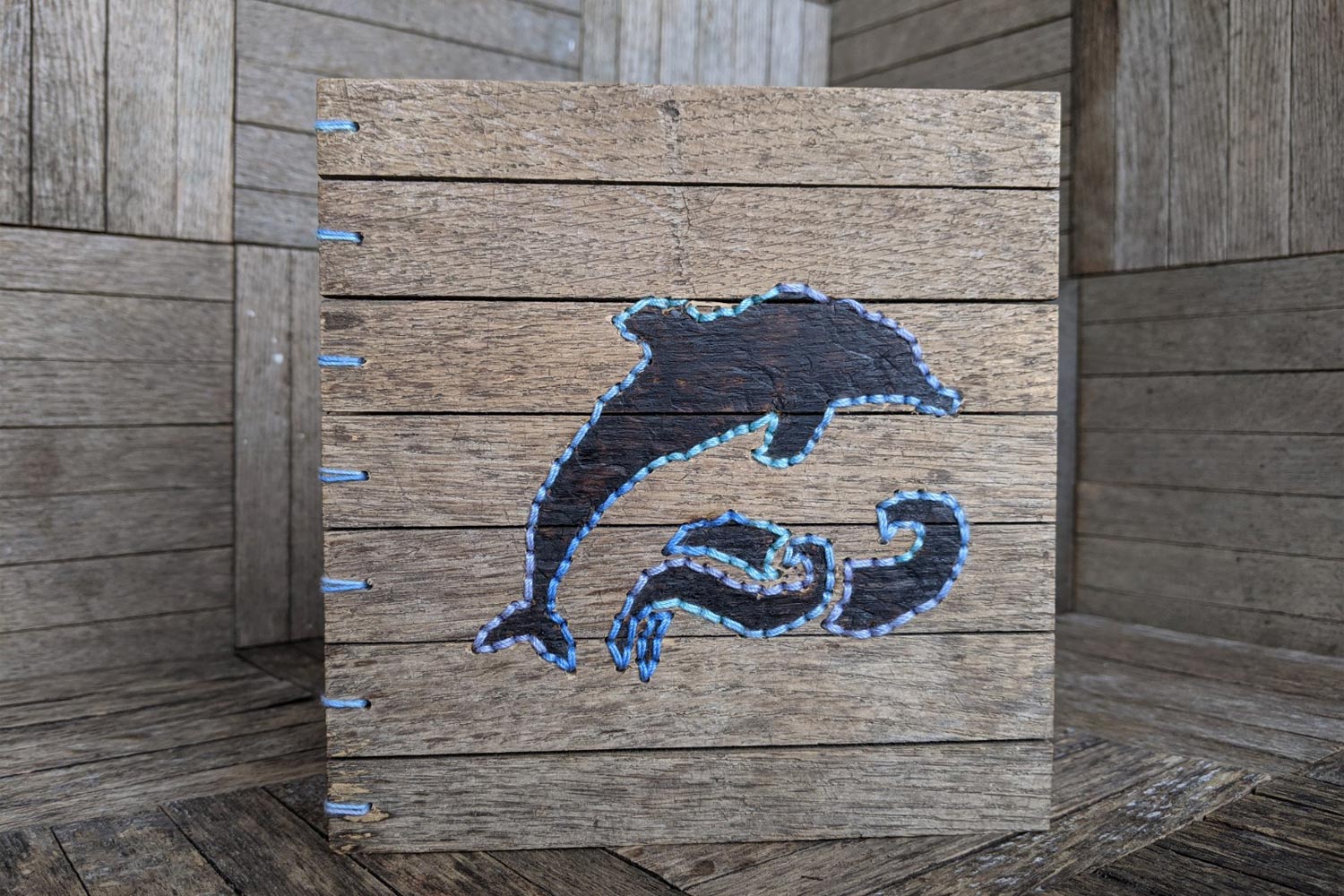