Tales of a Ferret Owner: Oh, the places Erin will go 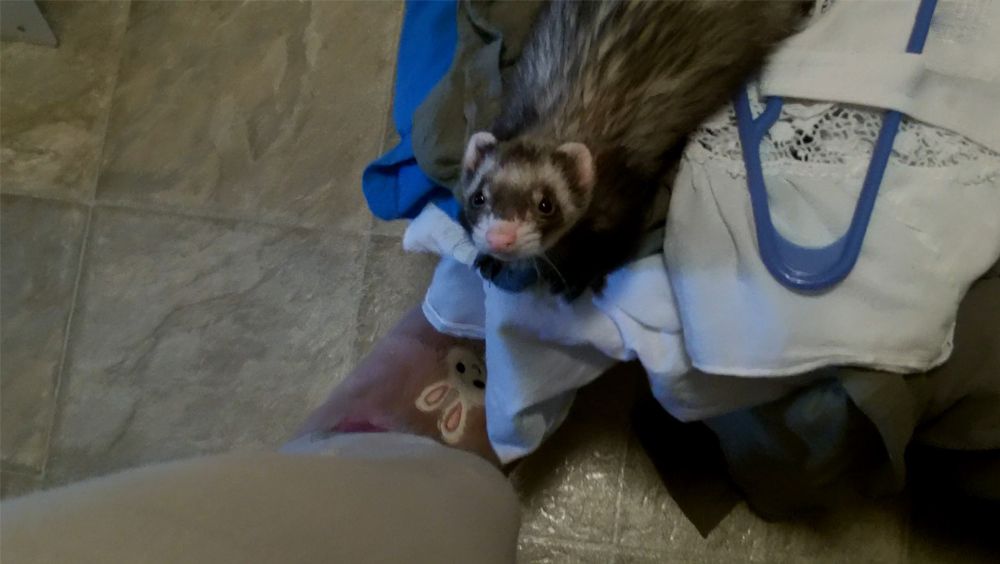 It’s a new year, and I’m surprisingly off to a good start. After posting my last blog New Year’s Resolutions 2021, I’ve done more work on Ryac and the Dark Mage. I’m happy to say that it is nearing completion as a story! Now, that still means edits and whatnot, but I still think it’s feasible to get it published this year. (To be clear, the goal was simply to finish the story. Publishing would be a real sweet bonus.) That in itself is very exciting! Plus, it’ll be nice having these one-off stories completed, which, again, were supposed to be a maximum of three blogs long (ha!). As you may recall, Positivity Camp was the same way.

Next week should have some progress on goals #3 & #4 (eat something new and craft some books). Until then, I’ll be sharing the below story of Erin and just one of the places she would go.

Now, by this point you’ve likely learned a lot about the ferrets. They do what they want, and they do it when and forever how long they want to do it. If they see a new item, they want it. Old item with new attention? They want it. Forbidden item? SUPER WANT.

I’m talking about Mountain Dew in a cup, not even an unsupervised cup. Was it super bad for a ferret to consume? I’m not a doctor, but I’m going to say, yes. Why? Because I know I shouldn’t have been drinking it, but it is so darn good! Apparently, Erin already had an addiction to the bubbly beverage. I didn’t know this. I wasn’t warned about this. So, when I let her sniff it, as I let Tango and Teeka also do (and they lost interest immediately or I wouldn’t have risked Erin’s greedy muzzle in my, at the time, favorite drink) she dove her greedy muzzle into it! I swear she got a solid gulp down before I realized what was happening.

From that moment on, I had to stand to drink the stuff. Why stand? Because she would climb me like a tree and leap for it! At least standing made me a taller tree, and a more mobile one at that. Although, trees shouldn’t really be mobile… Ah, whatever. You get the picture. She was an addict.

Wow. Uh, got a little sidetracked there! Ok. Ok. I got a lot sidetracked. I hadn’t intended to share that story at all! Well, at least not yet. So, um. Bonus story?

On to the main attraction! Erin. The star of the show. I mean, she isn’t actually the star, she was just the most active of the three in terms of mischief and misdeeds. Speaking of mischief. Remember the laundry basket incident? Well, it gets better!

So, there I was: laundry day. Now, after the whole laundry basket incident I mentioned before, I took extra steps when it came to doing laundry. I’d load the washer and before I put soap in, and definitely before I hit start, I would check the whole house and make sure all three ferrets were accounted for. I’d heard stories of other animals meeting gruesome fates in washing machines and dryers. I wasn’t about to half-ass it even once. Nope! No drowned or fried ferrets on my laundry watch! Yes, I was specific about that being laundry watch. There were other watches too. Naps, moving furniture, vacuuming, etc. The ferrets are both intelligent and really quite dumb. I had to be careful.

Moving on! No ferrets ever made it into the washer. EVER. They did, however, frequently make it into the dryer. And that’s where this story is going. Now, to go back a bit. I think the reason the washer was so difficult to sneak their sneaky ways into is because it was simply too tall. The entrance, for them, was on the top. The only way in was for me to be careless with the laundry and dump them in along with it. Despite that, I really did check ever single time to make sure I didn’t do that.

The dryer, on the other hand, didn’t open on the top, but on the front. To make matters worse, for me, the door opened at the top and came down, providing a nice ledge for the ferrets to do pullups on until they could swivel and huff their way up and then inside. This may sound like a lengthy process, and for an older ferret, it did take about thirty seconds. I have no doubt younger ferrets would have vaulted inside with little effort. The ferrets quickly wizened up to the fact that I had a laundry basket nearby. A very easy to climb one, at that. So that thirty seconds was really only for the unobservant or over achiever type ferret (Erin) while the basket was great for the observant and far more clever ferrets (Teeka and Tango).

I’ll admit it. I often became distracted by Erin’s lengthy attempts into the dryer. She was such a chubby thing, but she rarely lost her grip or let go. She could certainly do more pullups than me. I wouldn’t have even tried one while she often did seven or more as she relentlessly tried to get her back paws up to her front ones so she could scamper up.

Erin’s distraction often left me unaware of Tango’s entrance into the dryer. He enjoyed spinning it by climbing those three platforms inside. He also enjoyed rolling the dryer balls around. The only other one that could never sneak into the dryer, despite her speed, was Teeka. Her unique pattern of sprint and twitch often left her slamming into things at full force. Needless to say, she wasn’t quiet. She’d often run in, slam into the laundry room door, scratch herself, and then bolt up and over the laundry basket (sometimes stopping for an itch along the climb, which resulted in her falling either outside the basket or into it, depending on how far she made it before she had to scratch). From the basket, she practically teleported herself into the dryer. If the dryer was empty…well, no. It didn’t matter. She would find a way to collide with the walls. There was never any silence with her. Not unless she was passed out, and she never passed out in the dryer because by the time she would try, Erin would finally be hauling her bulk up and dashing inside to see what her best bud was up to, oh, and I guess Tango, too.

As you can imagine, I had little choice but to close the dryer before checking on the location of each ferret. Could I have locked them in their cage while I did laundry? Yes. But I hated doing that to them. Teeka doesn’t do well with tall places, but she loves climbing. Putting her in the cage is basically like sentencing her to either choose sleep or to choose a cruel cycle of climbing up, scratching, falling down, climbing up, scratching, and repeating with frequent face bites at Erin who tried following her every twitchy move.

Yeah, laundry days were crazy, but at least everyone was able to embrace it. The only thing I didn’t like was them burrowing into my clean clothes. Oh, and before you get all smart on me and tell me I should have closed the laundry room door… Let me ask you this. Do you remember what Erin does to closed doors? Do you have any idea of the feeling of eternity? Of trying to fold clothes, hang others, and sort when there is and incessant pounding, scratching, thumping, chittering beast demanding to be let in? Sure, a few minutes isn’t bad, but laundry never took only a few minutes, and Erin’s devotion was never in doubt. Not when she knew I was on the other side (I had to have a light on, at the very least). Not when she wanted what was denied.

Erin went where Erin wanted to go, and the laundry room on laundry day (and sometimes other days of the week had her pounding on the door for a few hours at a time as well) was somewhere Erin wanted to go. Also my mountain dew cup. She wanted to go there too. That made parties especially fun, now that I think about it. No one ever believed me about not leaving their drinks unattended around Erin. They were fooled into complacency by Teeka and Tango and their disinterest. Nay! Their extreme dislike of the fizzy bubbles that popped in their face as they tried to sniff.

Anyway, enough about Erin and her addictions. Next time it’s time for Teeka to go missing. Yeah, yeah, despite her telltale thomps as she stopped to itch, she could get to places without me knowing where she went or when she went there. Don’t forget, Teeka had speed and a laser focus. Of the three, she usually got what she wanted, probably because she was the skinniest and could squeeze into places faster and slither underneath them quicker too. Tango and Erin simply took too long.

Stopping! I was stopping! You’ll just have to check back in to see what Teeka did to vanish so well that even Erin couldn’t find her.

Photo is of Erin on my clean laundry. Don’t be fooled by that innocent face!