Tales of a Ferret Owner: Erin Hated Us - Continued 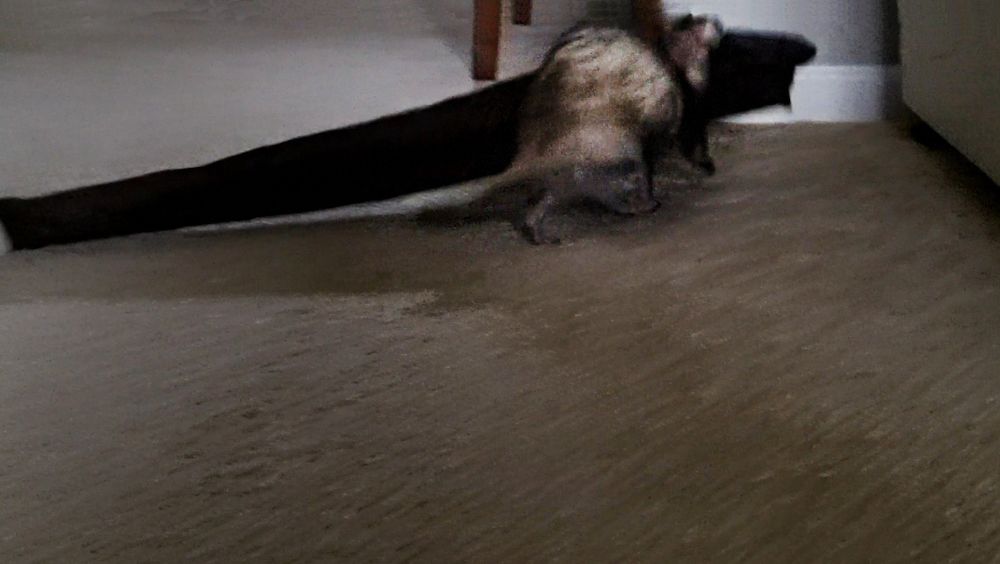 In celebration of Cat Herders Day, I thought I’d share a tale about my ferrets. After all, they are very cat-like in their behavior. Plus, neither of them really allows their owners to herd them around.

In case you were curious about the holiday, National Cat Herders Day is today. It’s a holiday that recognizes those who have a life or job that is like herding cats. In other words, these are jobs or lives that come across as cute or innocent but that are also challenging. For instance, a dog washer often makes this list. Kindergarten teachers as well. They sound fun. They look fun from the outside, but they’re not as innocent or innocuous as their descriptions would have you think. Hence why a ferret story fits so well with today. I hope you enjoy it!

There’s only so much you can take before you give up. Erin was a mastermind at making us cave in, at least on the mostly unimportant things. We never did let her roam outside freely, like she wanted to. There are limits, after all. I also didn’t let her eat poisonous chemicals, much to her grumpy dissatisfaction.

Those smaller wins didn’t really feel like wins for us. They were simply part of the responsibility of caring for another life under our protection.

No, the things that felt like wins were sadly nothing more than what was expected of us. The true battles, the ones where Erin pit her will against ours, were often far more difficult and were ones we often lost.

A while back, I told the tale of Erin assaulting our bedroom door as she demanded the closed door be opened. I may have left out that after we did open it, for our sake and for the sake of the carpet, she wandered in, snuffed a few things with her face and then wandered off to go do something else. Very cat like. Very demoralizing.

Well, we ordered something to put a stop to her clawing at the carpet and her nose butting under the door. How to describe it? It was a cloth contraption that had two foam strips that, when slid under a door, provided a foamy barrier between the door and the animal’s claws. It also kept Erin from stuffing her face under the door. Now, this cloth and foam contraption only went about an inch up on the door, so it didn’t stop Erin from scratching at the miniscule gap between the door and the door frame.

While that would normally have been an issue, the foam so infuriated Erin, that she forgot, for the most part, how much she enjoyed scratching at that gap and making the door bang repeatedly as it bounced back from her assault, hit the snag where the latch was, then bounced back into the wall. The sound though. Imagine the speed of a boxer’s punches followed by the sound of a banging door. It was awful.

With this new contraption, however, we had the door closed and Erin so distracted that she didn’t care about wanting inside the room anymore. Unfortunately, all she wanted to do was violently and viciously attack the foam. Had we dared to keep the door closed with that thing on it, there is no doubt in my mind it would have been destroyed. The cloth would have been ripped off and the foam would have been devoured and scattered across the house to different ferret stashes.

As it was, she had the fabric torn, though not enough to expose the foam, and teeth marks the length of the thing in a very short amount of time. Either we risked her destroying the door protector, or we risked a very large mess and a potentially ill ferret – on account of her likely desire to maul the thing and eat its remains to express dominance and victory over it.

So, we were left with little choice. We opened the door.

What we didn’t expect was Erin’s maddening desire to take the foam door protector and remove it from the door. That’s exactly what she did, by the way. The first time took her maybe an hour as she bit and pulled it at all the wrong angles. Then, bit by bit, she realized she needed to bite and pull the part where we’d slid it on under the door. Once she figured that out, the thing was off. Also, she remembered. The next time we put the thing on, she had it off in a little over a minute. The time after that, it was off as soon as she walked up to it.

And what did she do with her prize after tugging it free of the door? She took it under the bed, of course. When we proved to her that we could easily reclaim it from such an empty and open location, she did the unexpected. She took it and carried it, her head held high, to a position behind the couch. When we proved our arms long enough to reach behind the couch and retrieve it, she began being a real jerk and pulled it under the couch with her. You could hear her, chittering, clawing, biting, and making those squeaky sounds of pure unashamed joy as she celebrated with her prize under the couch.

Sure, we could retrieve the thing, but it wasn’t easy. And woe to the human who tried taking it before Erin had released it!! The look! The scathing look! The angry hops. The enraged war dance! And then the relentless wanting and attacking of our limbs as she fought to retrieve her prize.

Erin was only ever happy when she got what she wanted. Unfortunately for us, she often found new things to want, or new places to go.