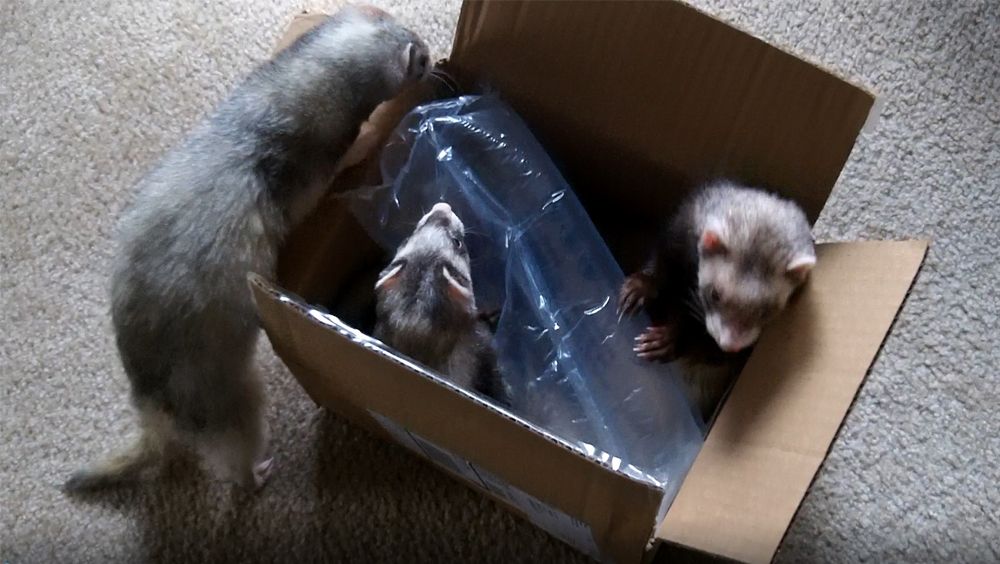 Surprised to see another blog post? Me too! I honestly didn't think I had it in me this week. Between the sore throat, ear infection, two books for a custom order, a new book to read, and my usual work, I thought for sure that I'd be too distracted to sit down and write. Well, I was wrong. Turns out, I had enough enthusiasm to write this week's ferret infused adventure. It's a side adventure really.

On a side note, November has started, and with it, I've begun crafting again. You can see my book of the day on Instagram or Etsy pages. I'll post a few updates on Facebook and Twitter, too.

The arrival of that solitary package was a game changer for us. Inside that peanut (the packing peanut variety) littered box was the very item we needed to defeat Erin.

Or so we thought.

And yes, I do mean adorable violence. Our ferrets were rather old when we got them, nearly seven or right at seven. That's the age most pet ferrets are dead by. Despite this, they had energy. LOTS of energy. They took that energy out on the box, the contents of the box (we wisely remove the item we had purchased first) and on one another. Any time a ferret went 'under', one of the other two would pursue them. Ferrets also love to dig, so there were a lot of flying peanuts in the air as they quickly realized the things could be 'dug out'.

We bought ourselves several hours of peace as the ferrets went crazy over the box. We might have had several lasting days of it had they not started eating the packing peanuts. Bubble wrap replaced the dissolving and salivated on remains, but bubble wrap wasn't as much fun to 'dig' down into. So, Erin eventually discovered she'd been tricked and that several doors were closed against her. True to her nature, she threw a fit while the other two enjoyed a peaceful nap under the couch.

Now, I will say this, that box and those closed doors were probably one of the longest periods of time that Teeka didn't have her pestering shadow chasing after her. I'm sure she absolutely loved that alone time away from Erin. The lucky little itch (and no, that isn't a typo, I really did mean itch - because she itched so much. You know, I probably wouldn't have to explain that if I just wrote and shared more of these more often. Ah well. Now you get to suffer as I feel the need to explain jokes.) Now, as I was saying:

Photo is of the three ferrets with bubble wrap and a box. Don't be fooled, there was more bubble wrap until they attacked it.