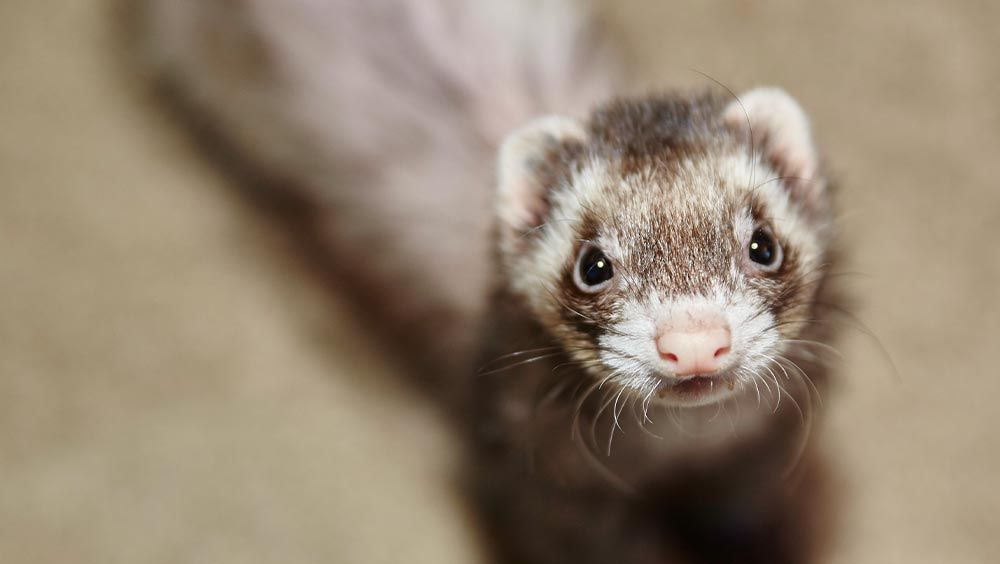 Welcome back to Tales of a Ferret Owner! Or hello newcomers! This is a random segment I've started writing that is about my time with three adorable and crafty ferrets. I often share short stories, crafting updates, writing tips, writing updates, Dungeons & Dragons adventures and other random writings here on my blog. I've even written a short novella here on the blog called Positivity Camp. I'm currently in the process of editing it. The finished piece will be out later this year for purchase. Yes, that's right my Positivity Camp fans. I'll have the book completed and ready for sale later this year! There are added bonus materials inside, too. But, I'm getting ahead of myself. For now, I hope you enjoy this week's entertainment as I tell the tale of how the ferrets made it home.

I erred greatly. Ferrets don't rest. They don't slow down. They will keep doing the same thing over and over until they get what they want, and these ferrets wanted off the back dashboard so they could explore the rest of the car.

At this point, you may be wondering, Sarah, why didn’t you have a cage or pet carrier for super-hyperactive ferrets? You did know you would be transporting them home, right? I’ve often asked myself the same questions. The truth is, I wasn’t expecting to take three rambunctious ferrets home the same day I went to see them. I should have known better.

The ferrets had been slowly shambling about the room, convincing me it would be alright. It had been a trick. A false showing of their true energy levels. I was told they were old for ferrets, being roughly seven or so. I was told they’d slowed down as they’d aged. Their previous owner had been gravely deceived.

Deceived, I placed the three on the flat surface behind the back seats of the car. I thought the window view might distract them. I thought the fear of falling might keep them from leaping off. I thought I would have an easy time preventing any ferrety antics.

In hindsight, I made a LOT of assumptions, and while some of them had been based on personal observations of these old ferrets, they were assumptions that led me to my doom.

Anyway, since I was the one who wanted the ferrets, it was my job to keep them from escaping past the back seat. Even then I knew that if they made it to the floor, it was game over. They were just bat sh-- crazy enough to go for the pedals. I don't know if they would have brought the car to a screeching halt or slammed their bodies into the gas pedal. I just knew that they were psychotic enough to do it.

That fear gave me energy. Over and over I caught, or nearly caught them, as they jumped, slid, flipped (Teeka tended to spasm) over the edge of the back seats. I know people were watching the erratic movement of my arms and those tiny flashes of brown, orange, and white as they drove by in their cars, but only because my husband, who was driving, told me so later. I literally could not take my eyes off any one of them for a second. They outnumbered me, and they knew it. They often synchronized their plunge to the back seat, certain that at least one of them might make it.

Thankfully, Erin often waited for Teeka, and Teeka often became immobilized by her itches. That left me time to nab Tango, toss him back onto the back dashboard (Don’t judge. They’re quite durable and I didn’t fling him hard enough to hurt him. Heck, it wasn’t even hard enough to stun him enough to buy me even a second of time), nab Teeka before she could come out of her spasm, and then go after Erin. Erin, being the chubbiest of the three, was also the slowest. Her neurotic devotion to Teeka also left her confused by the others absence. All of that combined made her the weakest link.

By then, I realized we’d been deceived. I knew the ferrets’ shenanigans were only starting. I just didn’t know what trickery they had left in store for when we arrived home. Over and over I told myself that these were old ferrets, and how bad could a ferret be when it had reached the final year or so of its life? After all, ferrets generally only lived to be seven if you were lucky, and these three had reached that point or were near to it. I’d had cats and dogs growing up, so I understood that age could slow an animal down. Surely, I told myself, they couldn’t be too much trouble.