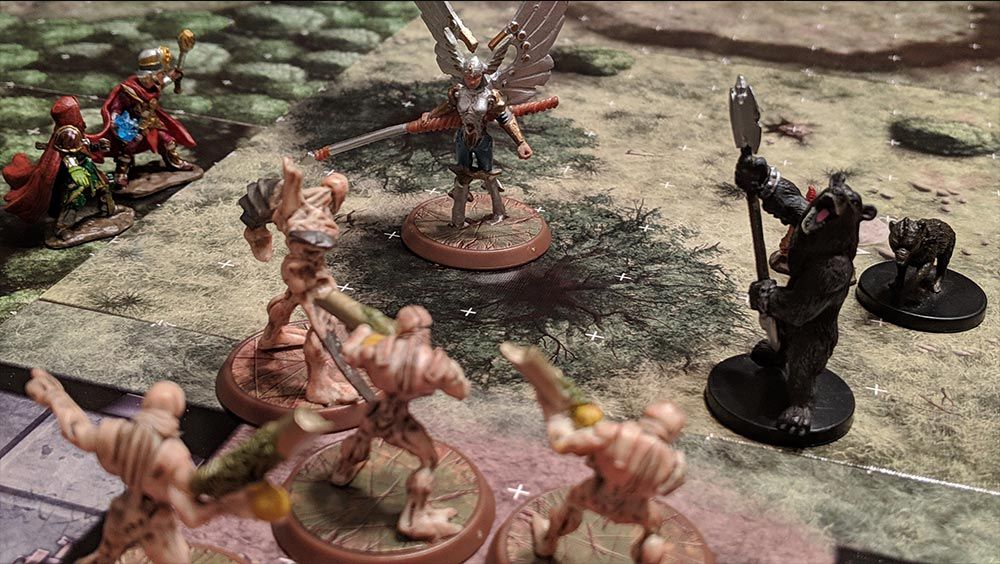 As you may know, I took a break from my usual writing to start writing up random stories of adventure from different tabletop gamers. These role-playing shenanigans, as I have called them before, were a great way for me to find a way to love writing again. Now, as I too have joined two different groups, one a Dungeons & Dragons adventure and the other a D20 campaign called Black Oak, I have stories of my own to share. Those cringe worthy stories take on a different level of sympathy as the adventures become more personal.

Instead of sharing one of the stories shared with me, I’m going to be telling one of the tales of woe from a campaign I am currently on. For a little background, a friend of ours decided to join the campaign while we were far along. They didn’t know much about our characters and they weren’t familiar too much with the world they had been thrust into either. Before I say too much and give the story away, here is the tale of our first meeting.

“I know you’ve just returned with the weapons I told you to steal for the true king, but I need you to head out immediately. As you know, the delegation of dryads is on its way here to pledge their support for the war,” Cache paused as he took a giant swig from his flask. “Ah, much better! Throat was parched. Yellowleg and the rest are on their way here. They’re slow moving, as they can’t be seen, or they’ll be killed on the spot. Those that aren’t killed will be captured and tortured. Speaking of that…” He took another swig as we waited for him to get on with the details of our next mission. Only Red Bear seemed unconcerned as he took a flagon of ale from a nearby table and downed the thing. He and our fearless leader might’ve started up another drinking contest, but Cache miraculously sobered up to tell us the details of our newest mission. “A dryad has been captured by the enemy. You’re to retrieve them and bring them back here to help boost morale and as a sign of good will and whatnot. What are you still doing here? Off with you! No, not that way. West! They’re outside a town west of here.”

“Should we take the boat, or fly?” Grimdorf, asked me as we adjusted to the proper direction.

“I only burned the one,” I said, glaring back. “And you know full well I only did it to kill those crypties! Those undead things can only be destroyed by fire. Besides, Grim and I were trapped on the boat. What were we supposed to do?”

“Not burn the boat down.”

“And let those things kill us? Removing their heads doesn’t even-”

“Let’s fly,” Grim said, getting between Red and I.

I glared up at the Treeclaw. Grim pulled me away as he summoned one of his flying creatures. As Red changed into a crow, we took off. After half a day of travel, much of it spent searching, Red, still in his crow form, told us to stop and take cover in the trees.

Grim and I went lower. Once on the ground, he summoned his stealth creature and sent it forward while I stayed quiet and kept watch. Grim wasn’t saying much, but I could tell he had found the dryad. We moved forward and I finally caught sight of her. She was tied to a scarecrow out in an empty field. To the right were old buildings with caved in roofs and crumbling walls. Something about them struck me as odd, but I didn’t know what.

Red, I saw, was sitting atop the scarecrow. Through our communication device, I could hear him cawing. In the sky, I spotted Grim’s flying summon making a direct path for the frightened girl.

“Red,” I whispered harshly into my device. “You have to tell her we’re here to help! She doesn’t know you’re a dryad from the Treeclaw tribe. Use your words and stop cawing at her. The old magic gave you that power, now use it!”

I turned to Grim. “Don’t scare her. She doesn’t know we’re here to help. Do you see any enemies?”

“I’m just going to scoop her up with my summon and carry her away. She’ll be fine.”

“What? She’ll be safe in the sky. And yes, there are a few enemies in those decrepit buildings. Now…just need to get those bonds untied…”

“Is your other summon chewing at her bonds? The wolf-like one?”

I listened for Red. He was still cawing; it sounded an awful lot like laughter. “Red!”

It was too late. The girl dropped to the ground as Grim’s stealth summon chewed her free of her bonds. Over the device I heard Red tell her to be still and that we were there to help, but she ran like her life depended on it. Grim’s flying summon missed grabbing her and she disappeared into the woods. From the building four men appeared and opened fire on the two summons.

Desperate to reach the fleeing dryad, I stepped out of the tree line, prepared to run for her, but the old magic shifted as I did. “Cursed zone,” I said beneath my breath. That changed everything. Instead of going after the dryad, I attacked her captors. The first one fell beneath an arrow. As he went down, his skin pealed back and four rat crypties skittered out of his decaying flesh. The other three men, if that was what they still were, continued to fight as though nothing unusual had happened.

Unrelenting, I went to fire at one of them, but I tripped, fell, and shot my foot with an arrow instead (Natural 1 to fire. Natural 1 on reflex save).

Grim laughed behind me and proceeded to try and reconfigure his communication device to take a photo of me clutching my injured foot as I lay on the ground in agony.

Red hadn’t seen my fall as he had been busy transforming into a bear, but when he heard Grim’s laughter, he looked over. He immediately began laughing in his bear form as he too found my agony amusing.

As I spoke, a fireball raced across the field and collided with Red’s furry bear butt as the dryad we had rescued accidentally attacked him (Natural 1 on her attack). Red shrugged it off as she shouted an apology, but I laughed! Oh, how I laughed!

As the others attack, I concentrated on healing my foot. By the time I was done, Red was surrounded by sixteen rat crypties.

“Bet you wish you had fire now, don’t you Red!” I shouted at him, still angry at all the laughter and mockery. “We’re here to help,” I shouted at the Pheonix tribe dryad we had rescued. “You have to burn crypties to destroy them,” I instructed her. Not that she really needed told what to do. She probably could have handled them all with her fireballs…well, she could have if her magic hadn’t been messed up by the cursed zone.

I worked while I talked and had two torches going. Then I ran to help Red. Grim easily caught up to me and I reluctantly gave him one of my torches. Four of the creatures came at us, but they burst into flame as soon as we landed a fiery blow on them. In no time we had ours reduced to ash. -story by Sarah Maree. Thanks!

Red, however, wasn’t fairing well. Each bite did little damage…while he was a bear; however, each blow they landed forced him to change. One second he would be a ferocious undefeatable bear, the next he would be a ferret, crow, humanoid dryad, river shark, or wolf. He took some heavy hits, but the constant changes also scattered a few of the rat crypties as he shifted in size. One had been pinned by a bear paw (Natural 1 on reflex save) while another had been flipped and tossed by the tail of a river shark.

Every time Red tried to flap his way to freedom as a crow, the crypties would strike and he’d be back to some other form and then would fall to the ground. He couldn’t flee, and he couldn’t destroy them. If the fireballs hadn’t taken care of a few (including three in one go thanks to a Natural 20) and our torches hadn’t taken care of the rest (the final three also with a Natural 20 and thanks to an attack of opportunity), Red might not have made it.

Cynder, the dryad we had saved, thanked us and while she didn’t really want the help, she did travel back with us. She was shy and didn’t say much, but it seemed like she was about to tell us something when we arrived back at camp. Then Yellowleg and his rowdy group showed up and she dashed off to look for family and friends. Times were rough for the dryads. I hope she found them.

Black Oak Campaign: This is a d20 campaign created by Jake Walker and is set in a medieval world with a mix of magic (Arcana) and magically enhanced weapons (pistols).
d20 Campaign: A modern role-playing game with the use of 20-sided dice as the deciding factor in many actions in the game. The system was created in 2000 by Wizards of the Coast and was originally developed for the 3rd edition of D&D or Dungeons & Dragons.
Dungeons & Dragons (D&D): A fantasy role-playing game that takes place in a fictional and medieval myth-based world.
Saving Throw Types: There are three kinds: Fortitude, Reflex, and Will: ... Rolling a d20 and landing on a 1 on a Saving Throw means automatic failure (rolling a d20 and landing on 20 means automatic success) and can result in damage to exposed items.
Reflex: This save measures a player’s ability to dodge area attacks and unexpected situations. A Dexterity Modifier is applied to Reflex saving throws.
Natural 1 (nat 1): This is a dice roll done that results in landing on a 1. No matter how skilled a player is, if a 1 is rolled, they fail...epically and often in a hilarious manner.
Natural 20 (nat 20): This is a d20 dice roll that results in landing on a 20. No matter how poorly skilled a player may be at a task, whatever they set out to accomplish, they succeed. Often times, the success is greater than the original goal.