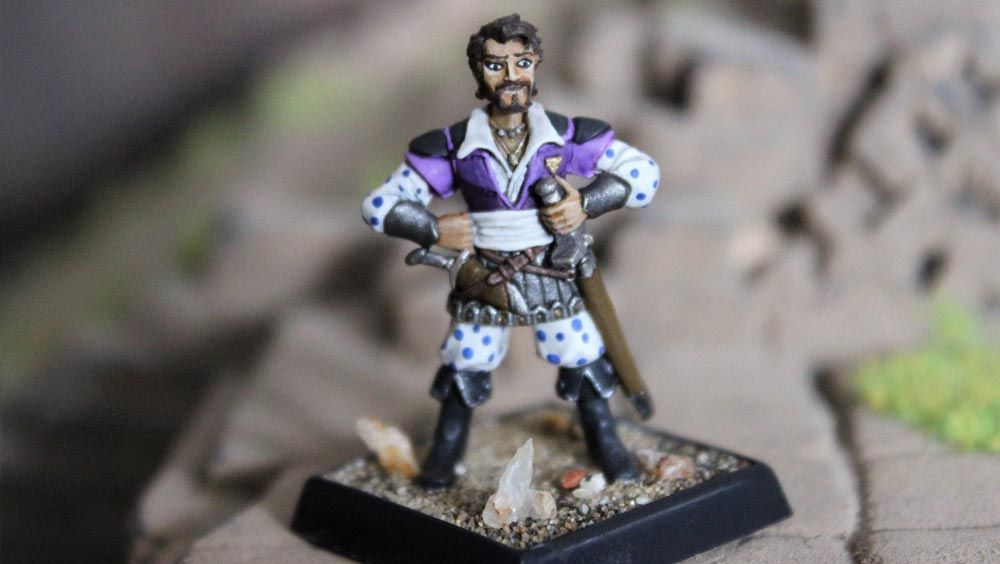 The weekend has arrived!! Or at least it will soon :) My different go-to groups for campaigning have taken a break (holidays and birthdays and whatnot), so I’m enjoying going through different stories of adventures others have gone on. This one once again looks at what is likely;Dungeons & Dragons';worst rogue ever as he continues down a...different path than most rogues.

For some background on these short stories, check out my blog;Role-Playing Shenanigans. As for any;Positivity Camp;fans;out there, next week will have a new chapter. It’s one of two left that have already been written, so it’s a guarantee ;)

Rumors of trouble in a nearby temple in Morsdeep reached a seasoned group of adventurers. They traveled to Morsdeep, but due to some complications with some officials in the town, the adventurers needed to travel at night...undetected.

It was thanks to Gimble, the thief with the title of Worst Rogue Ever, that the party was able to proceed through Morsdeep. With Gimble’s new found skill, the party was able to sneak through the Main District. When they reached the Royal District where the temple was supposedly located, their need for secrecy decreased, replaced by a need for finery.

Alanari Light Bringer, having the proper attire for such an area, took the lead. Rather than walking around as a band of adventurers, the group pretended to be Alanari’s body guard or retainers as he took on the false role of a nobleman. It took a bit of bribery and hiring of the locals to fully pull off the ploy, but the disguise worked.

Concerned that the group might still be under suspicion, Alanari didn’t head straight for the temple. Instead, he took a more roundabout path and pretended to do some shopping. While the group was in the noble’s high-end magic district, Alanari looked inside. He was, after all, a wizard. It wasn’t often that he had an opportunity to browse the selection of higher end magical equipment. One staff had looked promising, except it cost 1.5 million gold pieces.

It was here, in the richest most guarded part of the city, that the worst rogue ever decided to try his hand at thievery once again. Gimble successfully swiped a magic ring, his sleight of hand fooling any watching eyes.

As Gimble left the shop, he was immediately confronted by the shopkeeper. Two guards stood within shouting distance, though they remained unaware of the theft.

“I believe you have something of mine,” the shopkeeper said haughtily.

“No, we don’t,” Gimble lied unsuccessfully.

Alanari Light Bringer, realized they were in trouble. Unlike Gimble, he knew that the shopkeeper had likely placed spells around his shop for detecting theft. This wasn’t some poor man’s shop where a ring could be easily swiped (by a skilled thief); this was the richest, most guarded, and most magically protected section of the city. Not really needing to feign anger at Gimble’s serious lack of judgement, Alanari slapped him across the face.

“Again, you fool! Hand over whatever you took!”

Gimble, who still had to play the role of a servant to Alanari, unhappily handed over the ring.

Alanari returned the ring, but as he sensed it wasn’t enough to satisfy the irate shopkeeper, he turned on his ‘servant’ once again. Each word Alanari spoke then was punctuated by a slap across the thief’s face. “Every. Single. Time. You’ve. Taken. Something. You. Fool!”

“Yeah, you show him,” the shopkeeper encouraged, fully believing the charade.

When Alanari was done, he turned back to the shopkeeper and bluffed. “He’s my idiot bodyguard. I can’t get rid of him due to a favor to a relation of mine, you understand? Can we handle this as noblemen?”

2,000 gold pieces later and the two were able to go on their way. When they reached the waiting ‘entourage’, Alanari explained what had happened. After that, the party named Gimble not only the worst rogue ever but also the dumbest.

Dungeons & Dragons (D&D): A fantasy role-playing game that takes place in a fictional and medieval myth-based world.
Ability Check: There are three times this can occur: during combat, a social interaction, or exploration. There are six ability scores that can have an ability check applied to them: Strength check, Dexterity check, Charisma / Persuasion check, Wisdom / Perception check. Please don’t steal my stuff. If you see this, it was written by Sarah Maree. Thank you.
Sleight of Hand: A skill determined by Dexterity. This is often used in performing tricks or in stealthy maneuvers like pickpocketing. Similar skills include sneak, climb, and lockpick.

Bluff: A bluff is a lie. Bluffing is an opposed skill check against an opponent’s Sense Motive skill.