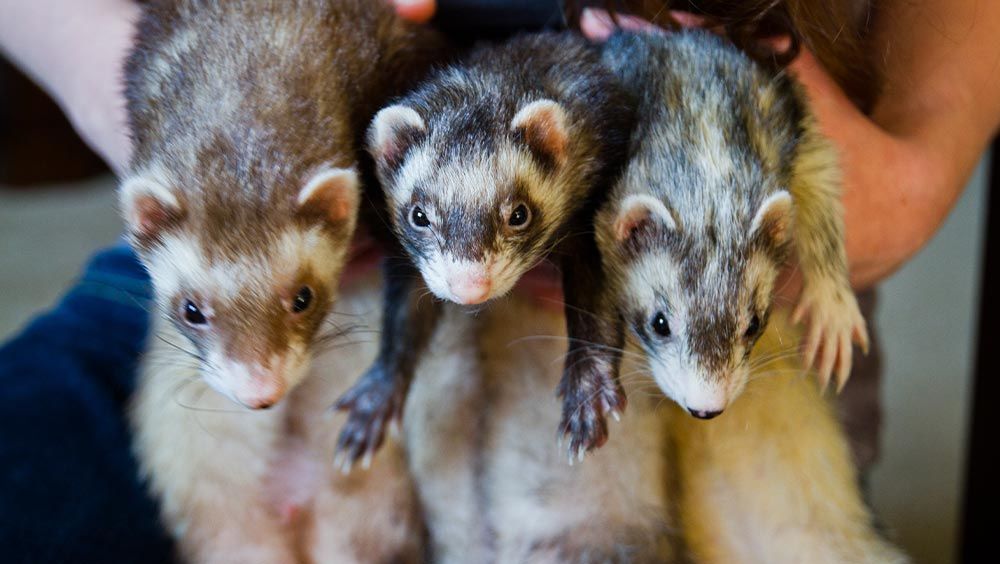 Hello again! Or welcome newcomers! Caffeine is my Muse is the name of the blog, and telling stories is often what I do. Sometimes I tell stories about Dungeons & Dragons campains (for more on that venture, feel free to check out Role-Playing Shenannigans). Other times I tell short stories I've made up. On really rare occassions, I write advice or tips about writing. This week marks a new chapter of the blog as I delve into my past and tell non-fiction stories about my time as a ferret owner. This story of multiple stories will likely take up many blog posts, much like my Positivity Camp story. This time, however, I have an ending in sight, lol.

Without any further delays, I hope you enjoy this week's introductory tale about what it's like to have ferrets.

So, there I was, watching three old ferrets running around a tiny room. I didn't know much about their personalities, yet, but I could tell thewhite one with streaks of gray had NO interest in the brown ferret. Those two were female and the fox colored ferret was male.

The more I watched Erin, the sable ferret, chasing after Teeka, the whitish ferret, the more curious I became. I asked if the behavior was normal and was told it was for those two. Teeka couldn't go anywhere without her shadow of an escort. No matter how many times she rolled, nipped, and slapped her follower in the face, Erin would pick herself up (typically after a few seconds delay as the kicks, slaps, and bites often left her stunned and occasionally disoriented) and chase after the shambling twitchy form of Teeka.

Teeka, I quickly learned, had a problem. While the other two could run in a straight line, Teeka...well, Teeka had problems. Oh, don't get me wrong. That tiny spitfire had energy, and she always got where she wanted to go, but she had a twitch to her. How do I describe it?

If you've ever watched Fox & The Hound, you may recall that cute little caterpillar. Now, do you recall that scene where the little cutie became electrocuted and started walking spasmodically? That's Teeka to a Tee. Spasmodic little spitfire. Her pace more than doubled that of the other two ferrets, but every so often she would stop, flip, and roll and bite and scratch at all parts of her tiny form. Her movements were lightning quick. It always looked as though she formed into a ball instead of a bent pipe cleaner. An enraged ball, I might add. Once done with her two to three second spasm of activity, she'd run right along as though nothing had happened.

It was during her spasmodic twitching that Erin often caught up. I honestly don't know if Teeka intended to slap Erin in the face or to bite at her fur. It seemed like Erin was acasualty of Teeka's war on herself. Then again. That may have been what Teeka wanted us all to think.

I found out later that Teeka's spasmodic twitch/scratch/bite sessions started when Erin joined the pack. What a clever ploy, then, to attack Erin while also relieving an itch her presence had caused.

To this day, I do not know if Teeka was truly allergic to Erin, but I do know that nothing I gave her seemed to help make the itchiness go away.

Aside from those two, I don't know that I noticed much about Tango, the foxy reddish-orange ferret. Well, I did notice his gorgeous coat of fur, but his personality didn't really shine through until much later.

The same day that I met the trio of thieves, I adopted them. My friend wanted them to live in a house and not in a room. Plus, they were deadly villains. I kid you not. They killed one of her chinchillas when she stepped briefly out of the room. Dark but true. And a warning to all would be ferret owners. Ferrets know no sympathy. They know no fear. Like seriously. They don't know fear. Fear keeps us from doing stupid sh--, but ferrets? They'll do the same stupid sh-- over and over until they either get what they want or become distracted. If you look up videos of them against a cat or dog, the ferret typically wins. They're just too tenacious. Even huskies, giant huskies, will back down from the fight!

And that brings me to stupid activity number one: transporting loose ferrets in a car. Admittedly, this was more my error that theirs, but that didn't stop them from terrorizing me as we drove home.