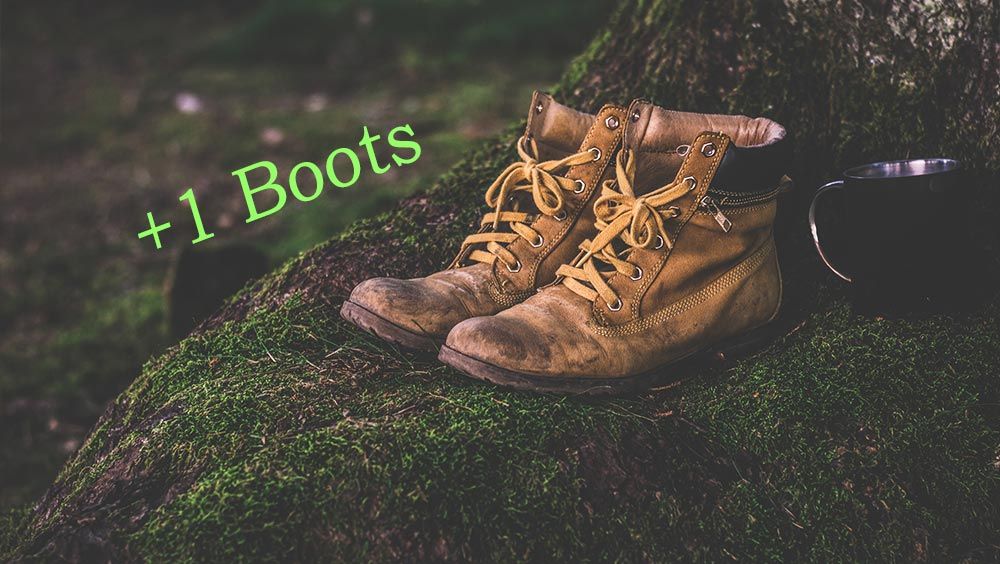 I’m losing my mind with editing Positivity Camp, so I’ve decided to start enjoying life again by keeping up on fun writing. It may not be often, it may not even be the adventures of heroes, but at least I’ll be writing again. I may even start working on doing more posts on the writing process or tips for writers. It’s been a while since I’ve done that, and I’ve had a few writers ask me questions.

Well, I’ve rambled on long enough! If you’re a Dungeon Master for D&D, I hope this doesn’t inspire you too much. If it does, may your players never know who gave you the inspiration.

Despite being attacked by kobolds on the way to town, things were going well for the newly formed party of adventurers. Normally an attack would have been viewed as a dangerous thing, but there were no casualties…on their side. The party happily took to looting the bodies. A pair of special boots (+1 boots of water walking) was soon discovered by Tyrfang Moonglide, the group’s Silver Dragonborn Fighter.

“I want your boots!” Keslin, the group’s Tiefling Ranger, declared as they reached a tavern in the city.

To avoid a fight, Tyrfang and Keslin decided to play a game of chance, with the winner claiming the boots. Tyrfang won and collected the boots yet again. As he entered the tavern, Keslin followed and intercepted his path.

Tyrfang scoffed at the weakling ranger. “What, you want to duel for them?”

The bickering quickly drew the attention of one of their other companions. “You’ve got to be kidding me,” Lady Sora Talmanira said, speaking up. As a Paladin of Pelor, her sudden involvement in the dispute had everyone’s attention. “You two take it outside and deal with it.” Lady Sora turned away and took a seat at the bar. There was a collective sigh of relief as it became clear the tavern wasn’t in danger of an indoor brawl…this time.

Keslin shouldered past Tyrfang as he left the tavern. The fight was on! Once outside, the two quickly began to duel. Tyrfang didn’t use the flat of his blade, though he did refrain from outright murdering Keslin. It wasn’t long before the Ranger was crushed, both in combat and in spirit. After the duel, he fled the city in shame.

Tyrfang let the others know how the duel went, and being a member short, they found someone else to take the Ranger’s place. The whole thing might have been forgotten, but as the party left the city on their way to a new adventure, Keslin ambushed them.

“I want your boots!” came the familiar cry.

Not one to turn down a challenge, even a pitiful challenge, the fighter pulled out his axe. “Let’s finish this!” And finish it he did – permanently. With Keslin dead, the fighter thought he’d resolved the ownership of the boots. He decided to keep them as a trophy, even if he found a better pair later.

Time passed and the adventurers heard rumors of a disturbance at Winterhaven. With the promise of adventure, and probably some loot, they traveled to the city. As they asked at local taverns for more information, they learned of Ninaran, an evil Elf Ranger. Rumors said Ninaran worked with Orcus' cult by spying on Winterhaven.

Tyrfang, who already had a grudge against Orcus – a demon prince, was more than happy to go destroy his minions. As the party learned of a more recent disturbance in the Winterhaven Cemetery, they set out at once.

A chilly moan echoed in the graveyard, like the witless call of the undead. Then came an eerily familiar call, “I waaaaaaant your boooooooots.” Keslin ambled toward them as a lifeless zombie.

Tyrfang charged forward with a challenging roar. The zombie’s only words were, “I waaaaaaant your boooooooots.” He might have continued saying them had the fighter not reduced him to a pulpy mess on the ground.

Years passed, and the party again began to forget about Keslin and his unending quest for Tyrfang’s boots, which were now kept as a trophy. Not only had Tyrfang’s skills and strength improved, but his quest against Orcus had led him into the service of Bahamut. The fighter had become a Holy Knight.

In The Shadowfell, Tyrfang found himself in a battle he hadn’t expected.

“I want your boots,” Keslin called to him. The years hadn’t been too unkind to the deceased Ranger. As a minion of Ninaran, he had fallen as a zombie, but as a minion fully under Orcus’ control, he had risen to new powers as a vengeful wraith.

It was there, on the Plane of Shadow, that Tyrfang unleashed a mighty ass-whooping. With his blessed weapons, he wailed on the unholy spirit. At long last, Keslin was put to a permanent rest – bootless.

As an added precaution, though also out of a long-standing grudge, and with some spite added in for good measure, Tyrfang went on to destroy Orcus as well. While the +1 boots remained one of his memorable trophies, they were not the only items Tyrfang collected in his journeys. Those are a tale for another day.

Dungeons & Dragons (D&D): A fantasy role-playing game that takes place in a fictional and medieval myth-based world. Written by Sarah Maree.
Keep on the Shadowfell (4e): 4e refers to the 4th Edition of D&D. Keep on the Shadowfell was one of the first official products or campaigns for the 4e. There are three parts total with this being the first of three in a series of adventures.
The Shadowfell: Often referred to as the Plane of Shadow. The Shadowfell is one of several planes of existence.